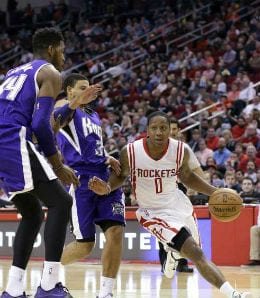 Isaiah Canaan, traded from Houston to the 76ers, is now the only PG in Philly. (AP Photo/Pat Sullivan)

The NBA trade deadline has passed, with 17 teams making deals involving 37 players, or 8.4 per cent of the league. Chances are that one of your players got traded and they either gave you hope or destroyed your championship dreams.

Isaiah Canaan, PG, Philadelphia 76ers (ESPN: 12.7 per cent; CBS: 39 per cent): Part of the huge trade right before the deadline, Canaan was sent to Philadelphia from Houston. Michael Carter-Williams was sent to Milwaukee, which seems to leave Canaan as not only the 76ers starter, but the only player classified as a PG left in the City of Brotherly Love. With his minutes rising he is an interesting pick up, especially since he has averaged 12 points in starts this season. The best part of Canaan leaving the Rockets? He won’t have to put up with Dwight Howard grabbing his junk anymore (see video below).

Spencer Dinwiddie, PG, Detroit Pistons (ESPN: 0.2 per cent; CBS: 3 per cent): A very low risk pickup with medium upside, Dinwiddie got the starting nod while D.J. Augustin was on his way to Oklahoma City and Reggie Jackson was heading to Detroit. Dinwiddie stepped up and torched former MVP Derrick Rose for 12 points, nine assists and three steals. With Jackson, Kentavious Caldwell-Pope and Tayshaun Prince likely to be starting, Dinwiddie is just someone to keep an eye on for now in standard formats, but a nice speculative pick in larger leagues.

Matt Barnes, SF, Los Angeles Clippers (ESPN: 11.1 per cent; CBS: 42 per cent): Barnes is a starter on a good team who is averaging 30 minutes. He’s a safe bet to not hurt you and definitely isn’t going to kill you. Barnes will hit a three or two per game making him if not a flashy pick up, a solid one.

Miles Plumlee, PF, Milwaukee Bucks (ESPN: 3.2 per cent; CBS: 20 per cent): Another shot in the dark based on his new situation, Plumlee — traded as part of the three-team deal involving MCW — could be helpful in Milwaukee. However, it might take some time for him to earn minutes so it’ll be interesting to see how it all plays out.

JaVale McGee, Philadelphia 76ers (ESPN: 1.1 per cent; CBS: 10 per cent): The 76ers took on McGee’s contract and some picks in a deadline deal, then announced they would buy him out. After that, he started for the 76ers on Friday, but only played 11 minutes. McGee’s shot blocking skills are undeniable, but there is a reason he didn’t play in Denver. If he does stick around in Philly and gets big minutes then he could be worth a pick up, so keep your eyes on him for the time being.

Alex Len, Phoenix Suns (ESPN: 5.8 per cent; CBS: 42 per cent): We recommended Len right after Christmas, and he vindicated us with a solid January. Unfortunately, an ankle injury knocked him out in early February. But Len returned Friday and sure looked healthy, throwing up a double-double and swatting a half dozen shots. Now that Plumlee has been dealt, the door is open for Len to take his game to a new level in the second half, so this is likely your last chance to scoop him up. Expect him to flirt with double-doubles regularly while pitching in with plenty of blocks.

By McCade Pearson
Tags: Dwight Howard, Houston Rockets, Isaiah Canaan, Michael Carter-Williams, Milwaukee Bucks, NBA Trade Deadline, Philadelphia 76ers
This entry was posted on Saturday, February 21st, 2015 at 5:14 pm and is filed under BASKETBALL, McCade Pearson, The Wire Troll. You can follow any responses to this entry through the RSS 2.0 feed. Both comments and pings are currently closed.