The Wire Troll: Great Scott and the Rubio Puzzle 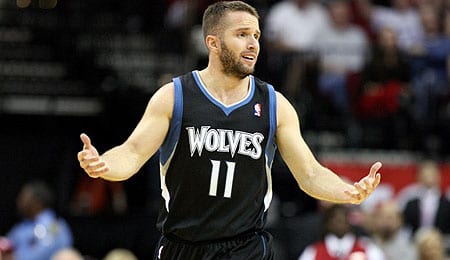 J.J. Barea has forced his way into a timeshare in Minny. (Troy Taormina/USA Today Sports)

Welcome to yet another week of digging deep to find those players producing useful Fantasy statistics as a result of opportunity, additional playing time, injuries, etc. We at The Wire Troll are committed to helping Fantasy hoops owners be successful. So without further hesitation, here are the players to be seriously considered for the immediate future.

J.J. Barea, PG, Minnesota Timberwolves: Coach Rick Adelman is obviously dismayed with the play of starting point guard Ricky Rubio. As a result, Rubio presently finds himself in a timeshare with the diminutive Barea. Barea, best known for helping the Dallas Mavericks capture a championship in 2011, has played 25 and 24 minutes respectively over the last two games while averaging 14 points and four assists. He started making his case for more PT with a big game on New Year’s Day (see video below), and bears watching for those in need of point guard help.

Brian Roberts, PG, New Orleans Pelicans: With starter Jrue Holiday sidelined indefinitely by an ankle stress fracture, Roberts has entered the Pelicans starting lineup. Roberts will not be as productive as the talented Holiday, but certainly will help in all point guard related categories. It doesn’t hurt that swingman Tyreke Evans is also experiencing ankle problems, giving more credence to acquiring Roberts.

Norris Cole, PG, Miami Heat: Mario Chalmers has been troubled by a sore Achilles over the past few weeks, allowing Cole to see additional playing time. Cole has seized the opportunity, registering 14 points, five assists and over one steal per game over his last four outings. With Chalmers and Dwyane Wade both gimpy, it appears Cole will continue to see productive minutes for the two-time defending champs.

Wesley Johnson, SG/SF, Los Angeles Lakers: Quite simply, the Lakers are a mess right now. In fairness, they have been plagued by the “injury bug” which has provided opportunity for players like Johnson, Jodie Meeks and Kendall Marshall to flourish statistically. Johnson, the former Syracuse standout and Timberwolves lottery pick, has been on a tear, averaging 15 points (including two treys), five rebounds and 1.3 steals during his last six games. He has played over 30 minutes in each and ranks as the top waiver wire pickup at present.

Mike Scott, PF, Atlanta Hawks: Scott is rapidly improving and becoming the top player off the Hawks bench. He has registered 15 points, four boards and a steal over his last four contests and is taking advantage of the void created by the season-ending injury to centre Al Horford.

Richard Jefferson, SF, Utah Jazz: Jefferson has been a productive Fantasy player for several seasons yet has been a forgotten man in his first season with the Jazz. Now in his 13th NBA season, RJ has had a terrific January, recording 14.6 points, 2.6 treys, and three assists per contest.

Michael Kidd-Gilchrist, SF, Charlotte Bobcats: Gilchrist (wrist) returned this week from a long hiatus which saw his Fantasy ownership sink markedly. He will see plenty of time as the Bobcats’ starting small forward and represents decent value for those in need of frontcourt help.

Arnett Moultrie, PF, Philadelphia 76ers: We go deep into our bag of tricks to produce second-year power forward Moultrie, who is nearing his season debut after sitting out the entire campaign so far because of an ankle woe. We recommend him because of the potential he displayed in limited action during his rookie season. In addition, the Sixers have the least productive bench in the NBA, so Moultrie will definitely have the chance to shine. It also doesn’t hurt that Spencer Hawes, Thaddeus Young and Evan Turner are rumoured to be on the trading block. Watch closely!

Jason Thompson, C/PF, Sacramento Kings: Not the most consistent scorer at the centre position, Thompson can definitely help in the way of rebounding with some blocks sprinkled in. This month he’s had games of 16, 10 and 14 boards for the improved Kings.

Kelly Olynyk, C, Boston Celtics: The first round pick from Gonzaga will continue to be a major part of the Celtics rebuilding plan. As evidenced on Friday when he racked up 25 points, five boards, seven assists, two steals and a block, Olynyk has the ability to be a solid player, but like most young bigs, he lacks consistency.

Dewayne Dedmon, C, Philadelphia 76ers: Fresh from an impressive stint in the D-League, Dedmon was signed by the Sixers this week. With the lack of depth at the five position, keep an eye on him for his rebounding and shot blocking prowess.

Now it’s your turn. Who’s your favourite waiver wire pick up of the week? Let us know in the comments section below.

By Bob Raymond
Tags: J.J. Barea
This entry was posted on Saturday, January 18th, 2014 at 4:25 pm and is filed under BASKETBALL, Bob Raymond, The Wire Troll. You can follow any responses to this entry through the RSS 2.0 feed. Both comments and pings are currently closed.