By Dakota Case and RotoRob

Today, the 2014 RotoRob Awards turns to the ice. Don’t forget to check out our other awards:

As we near the end of 2014, it’s time to look back at the greatest and not so greatest Fantasy performers of the year. We may have added a bit more than that, too, so bear with us. 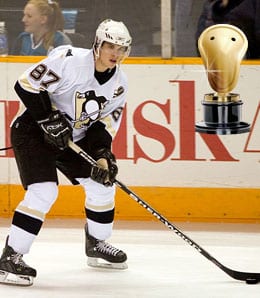 Sidney Crosby wasn’t as dominant last year, but was still better than anyone. (en.wikipedia.org)

Like last year, there was no one better than Pittsburgh Penguins captain Sidney Crosby, who “regressed” to 23 goals and 80 points in 65 games after scoring 103 points in 71 games during the 2013 calendar year. However, that’s not entirely accurate due to the date of this writing, and Crosby is all but guaranteed to put up more points before 2015 arrives. Still, unlike last year, he’s fallen into a bit of a scoring slump, going pointless in 10 of 27 games played this season and five of the last 10. It would be concerning if it wasn’t for the fact that he still has 35 points and a plus-9 rating regardless.

Scoring slump aside, there’s just no one better on the ice than the Kid. Hard-working, defensively responsible superstars with elite play-making and goal-scoring ability are extremely hard to come by in the NHL, and Crosby is the cream of the crop. That said, it makes the upcoming draft even more intriguing with names like Connor McDavid and Jack Eichel drawing comparisons to the Pens’ pivot and other league greats. As a rookie in 2005-06, Crosby set a standard (39 goals, 102 points) that even he has been hard pressed to match annually. Could we see a similar season out of McDavid next season? That could make for a very interesting 2015 edition of the RotoRob Hockey Awards, so you might want to pay attention to that story line as it unfolds. Until then, our hats are off to you, Mr. Crosby. — DC 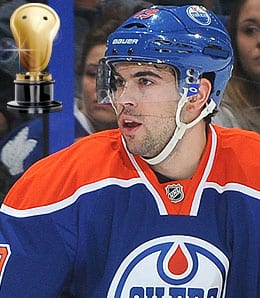 There are probably worse options than this NHL defenseman, but he hasn’t been nearly as good as he was advertised to be after choosing to hit free agency rather than signing with his draft team in Anaheim.

This year, RotoRob’s Fantasy Hockey Dud of the Year Award goes to Edmonton Oilers rear guard Justin Schultz. About to wrap up the first half of his third NHL season, Schultz has a fairly decent two goals, 13 points and a minus-9 rating in 32 games as of this writing. His nightly average ice-time of 21:35 leads all Edmonton defenders to start the season, however, he’s a top-four offensive defenseman being pressed into a role better filled by the likes of Drew Doughty, Keith Yandle or Shea Weber. We certainly don’t think he’s a bad player, but he’s too young to be forced into such a terrible situation with the Oilers, and his play has definitely suffered from it.

Since the start of the 2014 calendar year, Schultz has just nine goals, 31 points (seven on the power play) and a thoroughly disturbing minus-19 rating through 72 games to this point. The point totals aren’t all that terrible, but aren’t typical of a regular No. 1 defenseman. The most unfortunate part about the whole situation is that until the team improves, or acquires another talented defender to back Schultz up, things are highly unlikely to improve any time soon. — DC 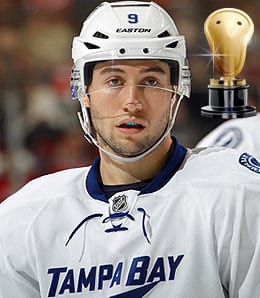 Colorado Avalanche young gun Nathan MacKinnon exploded in the Avs’ short, sweet playoff run against the Wild, scoring a whopping 10 points in seven games. However, a rough start to the 2014-15 season has dropped the former first overall pick’s status as our leading “ROTY” contender. Instead, a youngster from Tampa Bay has forced our hand, and his name is Tyler Johnson.

One of the three finalists for the 2013-14 Calder Trophy, Johnson lost out to MacKinnon, but has had a significantly better start to this campaign, scoring 10 goals, 33 points and a plus-19 rating in 33 games to start the 2014-15 season. When you add those numbers to his previous season totals starting from January 1, the diminutive undrafted centre leads the way with 24 goals and 62 points in 76 games. Considering the competition that has emerged the second half of the year, collecting our “Fantasy Rookie of the Year” award is no small feat for Johnson. Just look at the kids below that we considered. — DC 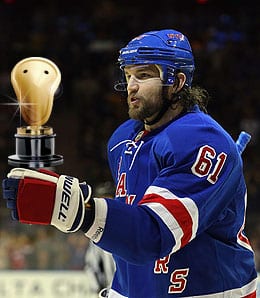 When the New York Rangers acquired Rick Nash in the 2012 offseason, they thought they had landed a pure goal scorer, one that had twice notched 40 or more goals and had paced the NHL in tallies in 2003-04. Uh, ya. About that. Nash’s first season on Broadway wasn’t bad, as he drilled 21 markers in 44 games in a lockout-shortened season. However, in 2013-14 he managed just 26 as injuries limited him to 65 games. Forty-seven goals in 109 games isn’t the kind of production the Blueshirts were banking on when the landed this dude. When we ranked Nash 59th in our Dynasty League Rankings, we said that more assists would be the key to his comeback. Sure enough, after managing a mere 13 helpers last season, Nash already has 15 this season — in just 38 games. Better yet, his ability to light the lamp has returned in a huge way with 25 goals so far — good for second in the NHL as we approach the halfway mark. Nash is back, baby! — RR 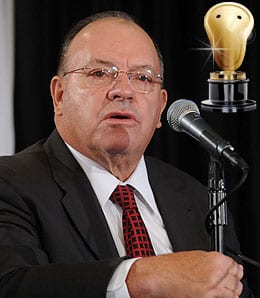 Scotty Bowman helped build the Wings into a model of consistency. (Sporcle.com)

Detroit hadn’t missed the postseason since 1990… the spring before our own NHL Editor, Dakota Case, was born (maybe he’s their lucky charm?)! That didn’t change in 2014, as the winged wheels made the playoffs for 23rd straight season — by far the longest current streak (San Jose in a distant second with 10 straight appearances). It’s the fifth longest streak in NHL history, and just one shy of tying Habs for the fourth.

Especially in the post expansion era (and even more so since the salary cap came into effect), it’s a very hard feat to accomplish, as the club has lost a number of key players and coaches in that span. Legendary coach and GM Scotty Bowman is long gone, as well as Steve Yzerman (now the GM of the Tampa Bay Lightning), Nicklas Lidstrom (arguably the best defenseman to ever lace up skates) and goaltenders Dominik Hasek, Chris Osgood and Mike Vernon have all ridden off into the sunset. Leading forwards Henrik Zetterberg and Pavel Datsyuk aren’t getting any younger either. However, that hasn’t stopped head coach Mike Babcock from making the best of what he has at his disposal.

Though his club dealt with injuries to numerous players, Babcock managed to lead his team to a wild card berth in their first season of play in the newly reformed Atlantic Division. The Wings fell in five games to the big, bad Boston Bruins, but appear to be back and potentially better than ever to start the 2014-15 season. As of January 14, Detroit was tied with Montreal with 55 points, just three behind Yzerman’s division-leading Lightning.

If they can keep up the pace through the rest of the season, Babcock’s Wings could have upwards of 44 wins and 105 points, five wins and 12 more points than they had last season. Yes, all appears to be right with the world in “Hockey Town.” — DC

Brawl of the Year 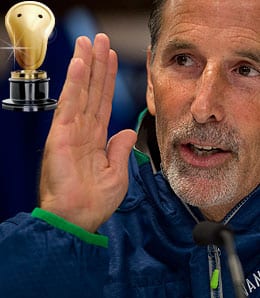 How big a role did Torts play in the big brawl? (O.canada.com)

It didn’t take long in 2014 for some real ugliness to rear its head. In mid-January, the Flames visited the Canucks and as soon as the puck was dropped for the opening face-off, a massive donnybrook ensued, with pretty much everyone on the ice going at it. Old time hockey, baby! All 10 players earned majors, each team lost four players for the game and were down to four defenseman for the entire contest. But gee, who really instigated this brawl? Canucks coach John Tortorella had Kellan Lain in the starting line. The 6’6″, 210-pound behemoth was making his NHL debut that night. He wound up with 129 penalty minutes and only 19 points in 63 AHL games last season, so it’s clear what his role is. Bruiser Dale Weise was also in the starting lineup for the Canucks along with enforcer Tom Sestito — who wound up recording 213 PMs in 77 games with Vancouver last season. On defense, Kevin Bieska — who led Canuck blueliners with 104 penalty minutes last season — was also in the starting lineup. Hmm… you think Torts was trying to send a message? — RR 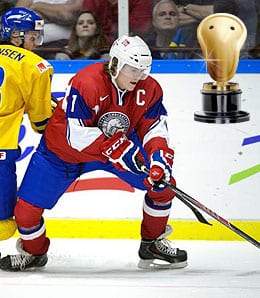 In mid-March, Norwegian hockey player Erlend Lesund of Sparta Sarpsborg got tangled up while on top of Storhamar’s Eirik Skadsdammen, who was on all four at the time. The result? Rodeo time, baby! Lesund tried to shake free, while Skadsdammen attempted to get up, but neither could succeed as Lesund went for a horsie ride on poor Skadsdammen. Now squeal for me, bitch! — RR 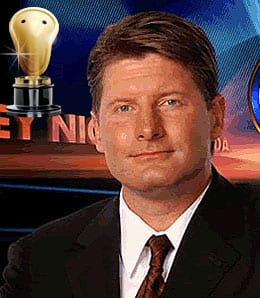 Former NHL goaltender and current commentator Glenn Healy always comes across as deadly serious on the air. It’s not that he doesn’t have a personality, but based on what we’ve seen, he skews more towards being a jerk rather than a jester. However, a GIF surfaced in May that suggests Healy may have more of a fun side than he usually exhibits. We aren’t intelligent enough to try to decipher his interpretative dance, but we’re sure it has some very important meaning. — RR

Top Coaching Candidate of the Year 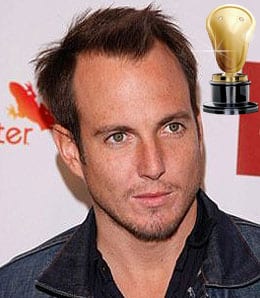 How would the Leafs have done under Will Arnett? (Jemel Countless, WireImage.com)

In late-October, actor Will Arnett got a brief chance to coach the Toronto Maple Leafs, creating a hilarious video, which you can see below. While some of his strategies may seem a bit unorthodox (having Dion Phaneuf play right and left defense; using two wingers and three centres at once; skate fast so the refs don’t figure out there’s an extra man out there; playing defenseman Morgan Rielly 52 or 53 minutes per game), but we’re still surprised he wasn’t given more consideration after Randy Carlyle got the axe. Arnett, given No. 14 for his day as coach, hearkened back to Brendan Shanahan as a very famous player that wore that digit, but he seems to forget that when it comes to Leaf lore, the only No. 14 that matters is Dave Keon. Come on, Will! Brush up on that Leaf history. — RR

Now it’s your turn. Sound off in our comments section below about who you think deserved some hockey hardware in 2014.

By Dakota Case
Tags: Pittsburgh Penguins, Sidney Crosby
This entry was posted on Wednesday, January 28th, 2015 at 9:05 pm and is filed under Dakota Case, HOCKEY, RotoRob, RotoRob Awards. You can follow any responses to this entry through the RSS 2.0 feed. Both comments and pings are currently closed.