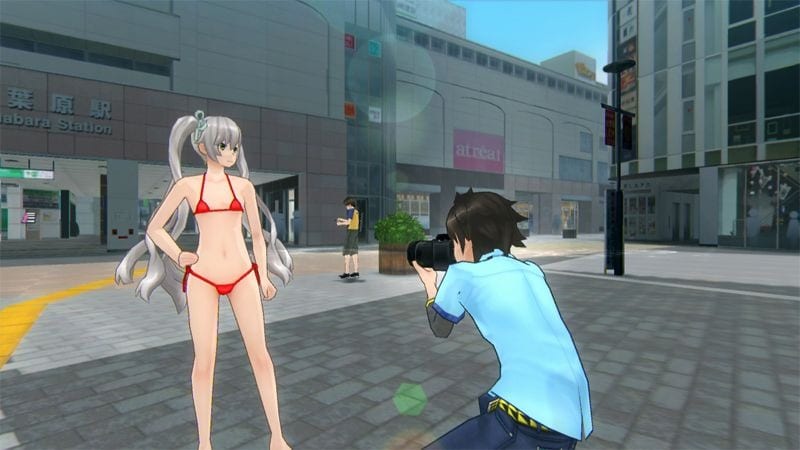 Every once in a while a game comes along that could be considered God’s Own Beta: Too weird to play, too rare to not. Akiba’s Trip: Undead & Undressed is easily one of those games. The folks over at Aquire are either some of the worst people on Earth, or some of the funniest and cleverest. We lean toward the latter. Akiba’s Trip lets us roam the famed Akihabara and save its wacky denizens from succumbing to a fate worse than death: being totally unfashionable. And being a vampire, sort of.

Akiba’s Trip centres primarily on beating people up and exploring Akihabara, so the controls don’t get too complicated. Triangle, Circle and “X” (high, medium, low respectively) govern your attacks, and navigation is set on the left thumb stick. Moving the camera is done with the right stick, and you will have to use that feature quite a bit because during combat the game will think you’re leaving the scene and move the camera to a higher point focusing on the exit.

This results in unnecessary damage being taken and, in Akiba’s case, unnecessarily removed clothing. It’s a small gripe, just an old gripe from games past that seems to take a backburner to everything else. That being said, the combat is actually very tight and rewards practice and twitch reflexes. Combos can be easily strung together, which in turn fills up your “Co-Op” meter. Once filled, you press up on the d-pad to trigger a co-operative ass beating on your foe by you and your eager partner.

While Akiba’s Trip certainly won’t win any awards for its graphical prowess, it’s still a very interesting and fun game to watch and play. The streets of Akihabara bustle with commotion, screens play music videos and advertisements for games and movies, and random conversations can be heard (read) on screen. Neutral and combat animations are well done, and with the variety of weapons at your disposal it’s fun to see what kind of attack animations lie in wait.

Some of the cut scenes are also animated, which are reminiscent of Studio Ghibli projects. Most of the time, the story is portrayed in the traditional JRPG style of character portraits and dialogue boxes. The visuals in this edition can also be customized to your liking: want the black lines around people to be more prominent to look more like a novel? Go ahead! Want every damn thing to be completely green? Your call!

From the pulsing combat soundtrack to the wondering funk tunes of Akihabara itself, the world is alive with sound. As mentioned, video screens constantly blare advertisements or J-Pop at any given time. This, coupled with the visual chaos of the city, really makes it feel like you’re walking around inside a manga novel or high-profile anime. The voice acting is also smashing, as every person you run into sounds unique and memorable.

Akiba’s Trip is literally a game in which you play as an action-figure obsessed nerd! On the promise of receiving some unique figurines, our hero (Nanashi) has been kidnapped by an unknown corporate entity and is turned into a creature known as a Synthister.

Being one of those is pretty much like being a vampire, but rather than feeding on blood they simply drain the happiness and motivation out of people (wait, isn’t that called marriage?). After being rescued by a young girl named Shizuku, Nanashi quickly finds himself in a plot full of turns, betrayals and lots of beef bowls.

To track down your common enemy, you must complete quests around the streets of Akihabara and gather clues to the identity of this entity. Tons of side quests are available to be found as well, but while certainly entertaining in premise they’re usually identical in execution — most revolve around beating someone up or finding an item for an NPC.

Even with that, the fighting is solid and employs a “Strip” system. Once your opponent’s clothes have a purple mist around them, you are able to hold a button corresponding to their body (Triangle/High, Circle/Mid, “X”/Low) and forcefully yank whatever clothing they’ve got right off of them. While fighting multiple opponents (and you will), you can even string together multiple strips and eventually make everyone’s underwear fly off. Yes, really.

See, like vampires, Synthisters can’t handle the sunlight. See? There is a reason for all of this. And, even though the process didn’t quite take, you are still somewhat considered one of these creatures and must abide by the clothing law accordingly.

At first, we really didn’t like the game — damn, this is just too weird tearing peoples clothes off. If you can shake that feeling (and find somewhere to play where no one will question what is happening on-screen), there is a lot of fun to be had in Akihabara. Akiba’s Trip: Undead & Undressed won’t be a title found on every shelf, but any self-claimed Otaku or anime fan will have a blast.

By Jeff Cater
Tags: God
This entry was posted on Tuesday, January 6th, 2015 at 7:01 pm and is filed under Jeff Cater, Video Game Reviews. You can follow any responses to this entry through the RSS 2.0 feed. Both comments and pings are currently closed.