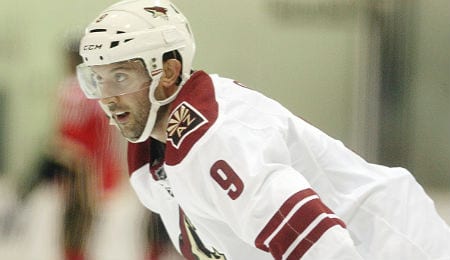 Sam Gagner, C/RW, Arizona Coyotes (ESPN: 2.5 per cent; CBS: 14 per cent): Gagner is never going to score eight points in a single game again (or if he does, he better buy a lotto ticket), but he managed a pretty impressive Week 11 with two goals, six points, a plus-3 rating, two penalty minutes, a power play point, seven shots on goal, seven face-offs won and three hits. With five goals and 17 points in 34 games, he’s not a primary source of scoring for Fantasy GMs (which is pretty much as we expected when we labelled him a bust heading into the season), but he may be worth taking a flyer on if you’re looking to replace a poor producer or an injury-ridden player. By the way, did the Coyotes acquire Gagner just so he wouldn’t make them look foolish anymore (see video below)?

Colin Wilson, C/LW, Nashville Predators (ESPN: 2.2 per cent; CBS: 17 per cent): For a player that has never eclipsed more than 16 goals and 35 points in a season, Wilson is on pace for a career season with 10 goals and 18 points in 32 games. In Week 11, the 2008 seventh overall pick had four goals, five points, a plus-3 rating, a power play point, nine shots on goal, two face-offs won and two hits.

Mathieu Perreault, C, Winnipeg Jets (ESPN: 7.1 per cent; CBS: 12 per cent): Perreault started the season with a terrible goal slump, but he seems to have rediscovered the general direction of the back of the net now. In three games last week, the Jets pivot had three goals, two penalty minutes, a power play point, eight shots on goal, eight face-offs won, eight hits and a block. He now has eight goals and 17 points in 35 games.

Kyle Chipchura, C/RW, Arizona Coyotes (ESPN: 0.1 per cent; CBS: 0 per cent): Is your team lacking grit? Look no further than Chipchura… who some might say we are really reaching for. It’s true — we might — but he had a noteworthy Week 11 with 24 penalty minutes, five shots on goal, 17 face-offs won and 10 hits. Chipchura only has two goals and five points this season, but that’s not why you want him in the first place. Seriously, if you find your team struggling to keep up in categories like hits, face-offs and penalty minutes, snatch this one up.

Cam Talbot, G, New York Rangers (ESPN: 3.2 per cent; CBS: 10 per cent): There is arguably no better backup goalie in the league than the Big Apple’s Talbot. He was flawless last week, stopping all 18 shots faced for his third win (and third shutout) in eight games this year. So far this season, he has a 2.02 goals against average and a .928 save percentage. If you are looking for a third goaltender, Talbot may be worth giving a second glance on the waiver wire.

No. 1. Jonathan Bernier, G, Toronto Maple Leafs: Bernier may have played just one game last week, but he was flawless. The Leafs netminder stopped all 43 shots faced to collect the shutout victory. Coincidentally, he was our No. 2 “Dud” of last week. Make the RotoRob.com “Duds of the Week” list and perform significantly better, well, we’ll take that! Now, will that work for our NHL Editor’s Minnesota Wild?

No. 2. Patrick Kane, C/RW, Chicago Blackhawks: There are many nights when there isn’t a better player on the ice than the ever dangerous Kane. In fact, it’s what makes top 2015 draft eligible American skater Jack Eichel so intriguing. When he’s being called the next Mike Modano — the best American to ever play the game — that’s taking guys like Kane and Minnesota’s Zach Parise into consideration as well.

Getting back on track, Kane had a pretty good week with three goals, six points, a plus-1 rating, two power play points, 11 shots on goal and a blocked shot.

No. 3. Johnny Gaudreau, LW, Calgary Flames: Speaking of talented American NHLers, “Johnny Hockey” is coming off a pretty swell week, too. In two appearances in Week 11, Gaudreau collected five goals, a plus-5 rating, a power play point, a game-winning goal, 10 shots on goal and one hit. A fourth round pick of the Flames in 2011, Gaudreau dominated the collegiate and international junior scene and has quickly shown that dominance early in his NHL career. In 36 games this season, the diminutive sniper has 12 goals and 29 points, five shy of Nashville’s Filip Forsberg, who leads all rookies in scoring.

No. 1. Jake Allen, G, St. Louis Blues: Allen has most certainly had better weeks in his career. In two appearances in Week 11, the youngster allowed nine goals for a 5.46 goals against average and a .836 save percentage with no wins. Maybe St. Louis really did need Martin Brodeur after all.

No. 2. Kari Lehtonen, G, Dallas Stars: Lehtonen may have collected a win, but his week was certainly a far cry from being called successful. In three starts last week, the Finn had a 4.04 goals against average and a .870 save percentage after allowing 10 goals.

No. 3. Marc-Andre Fleury, G, Pittsburgh Penguins: So, as it happens, the RotoRob.com role reversal voodoo that seems to accompany our “Duds” list goes both ways, which Fleury can personally vouch for after being named our No. 3 “Stud” last week. In Week 11, the former first overall pick allowed nine goals for a 3.74 goals against average and a .889 save percentage in three appearances. Sorry, Mr. “McFleury.”

And that wraps up our coverage of Week 11. How did you do? Tell us in the comments section below.

By Dakota Case
Tags: Arizona Coyotes, Sam Gagner
This entry was posted on Sunday, December 28th, 2014 at 3:46 pm and is filed under Dakota Case, HOCKEY, The Wire Troll. You can follow any responses to this entry through the RSS 2.0 feed. Both comments and pings are currently closed.