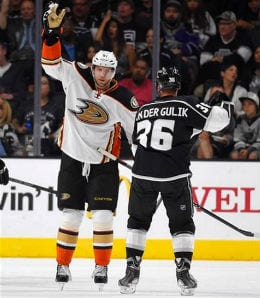 If you’ve made it this far with the 2014-15 RotoRob NHL Draft Kit, congratulations — you may have greatly increased your odds of winning your Fantasy league. So while you wonder whether Bobby Ryan was worth all the coin the Sens through at him, let’s review out top 10 busts.

Players on this list aren’t necessary useless for Fantasy purposes, but we highly recommend that you do not reach for them. If they fall far enough in your draft, things change.

1. Dany Heatley, LW, Anaheim Ducks: We know we said he was a sleeper, but avoid this guy at all costs if you are in a league of eight teams or less. He’s no longer a 30-to-50 goal scorer, and there’s a good chance he won’t even hit the 20-goal mark this season, either (although he can still snipe, as you can see in the video below). Heater may have a chance to play on a top line again, but a poor skater can only do so much, even one with hands like him. In smaller leagues, you should have a deep enough pool of talent to sufficiently avoid having to snatch this guy off the waiver wire.

2. Nail Yakupov, RW, Edmonton Oilers: Just a few days shy of his 21st birthday, the former first overall pick has already been considered a bust for a while now. After scoring 17 goals and 31 points in 48 games during the lockout shortened season, the young Russian only managed 11 goals and 24 points with a disastrous minus-33 rating in 63 games in 2013-14, even finding himself a healthy scratch on numerous occasions. Yakupov’s got the ability, but he finds himself slipping down the depth chart of an Oilers team looking to get back into the playoffs for the first time since 2006. Don’t even think about him until you get a better sample size.

3. Nathan Horton, RW, Columbus Blue Jackets: A former third overall pick, Horton still has a lethal scoring ability, but only when he’s healthy. Unfortunately, he’s had an unfair share of injuries ever since the open-ice hit by Vancouver’s Aaron Rome in the 2011 Stanley Cup Finals. Horton’s currently suffering from a “degenerative back condition.” It’s unknown just how much time he’ll miss.

4. Clayton Stoner, D, Anaheim Ducks: Stoner may have been offered a hefty four-year, $13-million deal in the offseason, but he brings very little of what he was paid for to your Fantasy hockey team. Actually, he brings basically nothing aside from some hits, penalty minutes and a few blocked shots. Don’t bother, folks. Bust.

5. Willie Mitchell, D, Florida Panthers: We’re warning you, don’t even think about it. The two-time Cup winner with Los Angeles may have a change of scenery in moving to another very sunny part of the country, but he’ll provide little more than another veteran mentoring for 2014 first overall pick Aaron Ekblad. Move along.

6. Alexander Edler, D, Vancouver Canucks: The Canuckleheads find themselves in the middle of a bit of a rebuild. As such, it will probably be far from easy going for the club, meaning Edler’s minus-39 rating from last season isn’t likely to improve much. In addition, he only managed 22 points, but he’ll still provide some value in hits and blocked shots. Unless your league contains over 12 teams, we’d recommend you don’t take the risk.

7. Daniel Briere, C/RW, Colorado Avalanche: We honestly have no idea what Joe Sakic, Patrick Roy and Co. were thinking on this one. Just days away from his 37th birthday, Briere hasn’t scored more than 16 goals and 49 points in a season since the 2010-11 season. In fact, he joins Colorado after scoring just 13 goals and 25 points in 69 games with the Montreal Canadiens last season. The Avs have exchanged top centre Paul Stastny and scoring winger P.A. Parenteau for the aged duo of Jarome Iginla and Briere over the offseason. Neither addition will help a once rising Colorado squad like the brass is counting on. Seriously, don’t waste your time, at least on Briere.

8. Viktor Fasth, G, Edmonton Oilers: Boy, it wasn’t long ago we were singing the praises of the undrafted Swedish netminder. He deserved them, too, after posting a 15-6-2 record, a 2.18 goals against average, a .921 save percentage and four shutouts in 25 appearances for Anaheim as a 30-year-old rookie in the 2012-13 season. Still, with starter Jonas Hiller healthy, and the emergence of Frederik Andersen and John Gibson, there was just no room for Fasth, who was sent to Edmonton at the 2013-14 trade deadline. In 12 appearances with the Ducks and Oilers, Fasth managed a 5-5-2 record, a 2.82 goals against average and a .903 save percentage. With Ben Scrivens manning the pipes, Fasth probably isn’t an ideal No. 2 goalie option for Fantasy GMs in smaller leagues.

9. Sam Gagner, C/RW, Arizona Coyotes: Maybe Gagner needed a change of pace, but 10 goals, 37 points and a minus-29 rating in 67 games is highly disappointing from a seven-year pro. He’ll get a fresh start with Arizona this season, but it’s probably not enough for your Fantasy team. He only scored eight points in a game once, folks. It’s a once-in-a-lifetime event — don’t expect it to happen again.

10. Damien Brunner, RW, New Jersey Devils: The Swiss winger entered his first season in the NHL to much fanfare, scoring 12 goals and 26 points in 44 games with Detroit in 2012-13. Now that it was thought he was a known commodity, New Jersey snatched him up in free agency the following offseason, but he would score one point less than his previous season’s total in the span of 60 games. He’s 28 and should be in his playing prime. It may be slightly too early to call him a bust, but beware.

And that wraps up RotoRob’s Top 10 Busts list. Anyone you’d like to nominate? How about Alexander Ovechkin… a minus-35 rating is still bust worthy even if he did score 51 goals, right? R-right? Hello? Have your say in the comments below.

By Dakota Case
This entry was posted on Friday, October 3rd, 2014 at 11:19 pm and is filed under 2014-15 RotoRob NHL Draft Kit, Busts, Dakota Case, HOCKEY. You can follow any responses to this entry through the RSS 2.0 feed. You can skip to the end and leave a response. Pinging is currently not allowed.