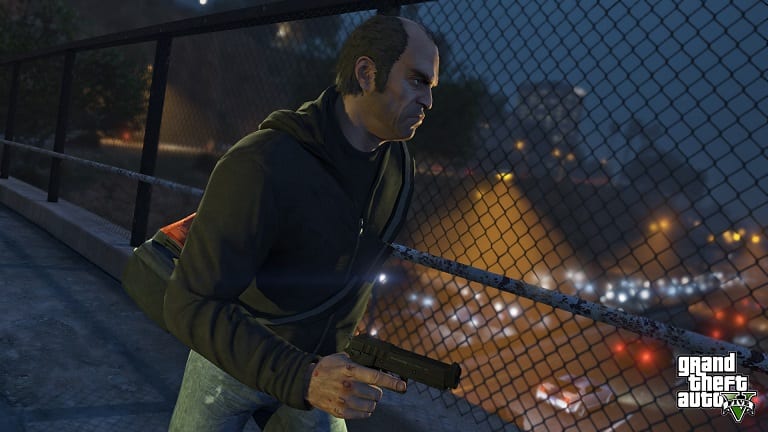 To live and die in Los Santos…

If orange wasn’t already the new black, then high-definition ports would be. In just over a year on the market, both the Xbox One and PlayStation 4 have been treated to more than their fair share of upgraded versions of last-gen titles. Many are tagged with words like “definitive” or “re-mastered,” though some are definitely more lovingly constructed than others.

Leave it to Rockstar then to not even bother with such formalities as it releases 2013’s Grand Theft Auto V with its name unaltered onto the next-gen systems. That’s not to suggest improvements have not been made, however, as both major (first-person mode) and minor (new kinds of wildlife) changes await those that played the game on Xbox 360 or PlayStation 3.

That being said, the storyline and core elements remain the same, so rather than rehash what we wrote when the game originally launched you can check out our full Grand Theft Auto V review.

From a gameplay perspective, the all-new first-person mode represents the biggest addition. While it would have been easy to slap something together, that’s not the Rockstar way, and it’s obvious that a lot of work went into making GTAV viable as a first-person game. As someone that has played the last five Grand Theft Auto titles, however, the perspective felt wrong, and even though there were lots of nice touches, the lure was always to come back to the third-person view.

Of course, others may find the change a breath of fresh air, and the ability to toggle between the views with the PS4’s touch pad makes it easy to experiment with it as much as you’d like. And speaking of the controller, the PS4 version plays all cell phone calls and police scanner chatter through its internal speaker, which is a fun little addition.

Visually, Grand Theft Auto V has been rebuilt, and the already excellent looking Los Santos has been taken to another level. The diversity of the locations, copious amount of detail work and uncanny hustle and bustle of NPCs makes this the definitive computer city. It’s now easier than ever to simply lose yourself in driving the streets and exploring the world — doubly true if you’re at all familiar with the real city of Los Angeles.

The biggest knock is that, unlike most of the other last-gen games that have re-released, there hasn’t been any single-player DLC. Granted, a few small side quests have been added (and it’s not like the game was light on content to begin with), but if you played through it on PS3 or 360 you’re not going to be getting anything of substance in terms of an expanded experience.

Conversely, Grand Theft Auto Online contains all the previous packs and add-ons — although it should be noted that these were all available free of charge, so again it’s not exactly value added. Rockstar has expanded the number of players that can enter to 30… at least theoretically. Despite days of trying we’ve yet to land in a match with even half that many players, and the wait times have been excessive. It’ll probably get ironed out with a patch, but as of now it’s in rough shape.

In some ways it’s hard to recommend a game that is essentially a port with no new content to sate fans of the original, but Grand Theft Auto V is such an amazing technological achievement on the new consoles that it’s honestly worth getting again just to experience the game in 1080p. Unless you’re absolutely done with GTA, this should be added to your collection post-haste.

By Herija Green
Tags: PlayStation 4, Xbox One
This entry was posted on Tuesday, November 25th, 2014 at 1:08 am and is filed under Herija Green, Video Game Reviews. You can follow any responses to this entry through the RSS 2.0 feed. Both comments and pings are currently closed.