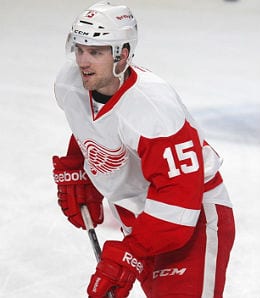 Nick Bjugstad, C, Florida Panthers (ESPN: 11.7 per cent; CBS: 35 per cent): After a slow start to the season, Bjugstad is establishing himself as one of the league’s hottest young goal scorers. In Week Six, the former University of Minnesota Golden Gopher standout put on a scoring clinic with five goals, eight points, a plus-6 rating, two power play points, a game-winning goal, 14 shots on goal, 34 face-offs won, five hits and five blocks. In 18 games, Bjugstad has seven goals, 11 points, 53 shots on goal and a plus-4 rating. If he’s on your waiver wire, seriously consider picking him up. According to Yahoo! Sports, Bjugstad is ranked 107th overall, but his performance in Week Six was enough to make him our top Fantasy Stud of the Week (see below).

Kris Versteeg, LW/RW, Chicago Blackhawks (ESPN: 13.1 per cent; CBS: 33 per cent): For a slightly above average bottom-six speedster on the wing, Versteeg has had an impressive week with two goals, six points, a plus-5 rating, two power play points, 11 shots on goal, a face-off won, a hit and a block. Like his team, he may have started out the season slow, but it’s looking more and more likely that’s in the past. In 16 games, the Lethbridge, Alberta native has six goals, 13 points, 42 shots on goal and a plus-7 rating. With a recent goal against the Sens, Versteeg flashed perseverance and some serious moves (see video below).

Riley Sheahan, C, Detroit Red Wings (ESPN: 0.8 per cent; CBS: 7 per cent): A big bodied pivot at 6’3″ and 222 pounds, Sheahan is just slightly smaller than the hulking Bjugstad, and is putting together a slightly less impressive season. However, it’s been encouraging nonetheless. Sheahan had a very solid Week Six, collecting two goals, four points, a plus-3 rating, two power play points, 11 shots on goal, 28 face-offs won and a block. In 20 games, he has three goals, nine points, 36 shots on goal and a plus-5 rating. Sheahan may be a steal in larger leagues, so keep your eyes on this one.

John Klingberg, D, Dallas Stars (ESPN: 6.6 per cent; CBS: 28 per cent): A fifth round pick of the Stars in 2010, Klingberg has burst into the NHL in a big way with two goals, six points, a plus-1 rating, four penalty minutes, a power play point, six shots on goal, five hits and nine blocked shots in seven career games. It’s an astonishing start to his career, and almost guaranteed to be unsustainable, but it’s certainly enough to intrigue. Oh yeah, did we forget to mention Klingberg is averaging 24:21 of ice-time per game? We recommend you monitor the young Swede closely.

Cody Eakin, C, Dallas Stars (ESPN: 1.8 per cent; CBS: 10 per cent): A youngster still looking to establish himself, Eakin is almost assuredly on your league’s waiver wire. He’s worth taking a serious look at, because the kid seems to be finding his groove. In Week Six, Eakin collected two goals, five points, a plus-2 rating, two penalty minutes, one shorthanded point, one game-winning goal, nine shots on goal, 27 face-offs won, three hits and five blocks. In 18 games this season, he has four goals, nine points, 40 shots on goal and a plus-3 rating.

“Studs and Duds” is our weekly segment about who was hot and who was not in Fantasy hockey in the previous week. Before we continue, we’d just like to point out that someone in our Fantasy league has not just one, but all three of our top three studs. Clearly they knew something we didn’t until now. Oh well.

No. 1. Nick Bjugstad, C, Florida Panthers: There was no one better last week than Bjugstad. As we discussed above, he put on a clinic in Week Six. Whatever issues he had early on this season (just two goals and one assist through the first 14 games), they are clearly in the past now. Bjugstad led the Panthers in scoring last season, and his recent hot streak has him just one point behind the team lead this season.

No. 2. Marian Hossa, RW, Chicago Blackhawks: It was a great week for Hossa with a goal, seven points, a plus-4 rating, three power play points, nine shots on goal, three hits and two blocked shots. On Saturday alone, he went off for a goal and three helpers.

No. 3. Patrick Kane, C/RW, Chicago Blackhawks: Hossa’s teammate wasn’t so bad himself. Kane also notched seven points (three goals), a plus-5 rating, two power play points, two game-winning goals, eight shots on goal and two face-offs won. But, you know — it’s just another day in the life of No. 88 as he continues to prove he’s among the NHL’s elite.

Detroit Red Wings defenseman Niklas Kronwall had an absolutely abysmal week, but three highly unlucky goaltenders saved him from our “Duds” list. And that’s a good thing… because he’s on our Fantasy team — but we digress…

No. 1. Ben Scrivens, G, Edmonton Oilers: What’s it going to take for Edmonton to get back into playoff contention? Better performances from Scrivens, that’s for sure. Zero wins, 12 goals against, a 5.16 goals against average and a .833 save percentage make him our No. 1 Dud of the Week.

No. 2. Kari Lehtonen, G, Dallas Stars: Lehtonen may have had two wins, but 15 goals against, a 4.17 goals against average and a .885 save percentage did little to appease his coaches and Fantasy owners.

No. 3. Sergei Bobrovsky, G, Columbus Blue Jackets: Like Scrivens, Bobrovsky didn’t manage any wins, but his goals against average (3.91) and save percentage (.898) were better than either goalie listed above… although not by much.

And that’s it for our coverage of Week Six. How did you do? Tell us in the comment section below.

By Dakota Case
Tags: Nick Bjugstad
This entry was posted on Sunday, November 23rd, 2014 at 8:19 pm and is filed under Dakota Case, HOCKEY, The Wire Troll. You can follow any responses to this entry through the RSS 2.0 feed. Both comments and pings are currently closed.