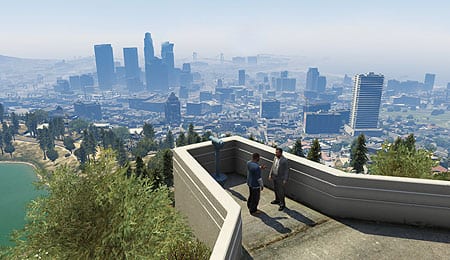 Chances are they’re arguing about something.

Few companies, if any, have built up the cache of goodwill from gamers Rockstar has, based on its history of taking time in developing high quality titles. To see that business model in action, you needn’t look any further than the company’s signature franchise, Grand Theft Auto. More than five years have passed since Niko arrived in Liberty City, but it wasn’t until last week that Rockstar brought the highly anticipated Grand Theft Auto V to consoles. It was worth the wait.

There are so many activities to participate in and vehicles to drive that it’s an exercise in futility to touch on them all. So, instead I’ll break it down into three primary categories: on foot, ground vehicles and aircraft. When simply moving around or in combat, GTA V does a very good job. Popping in and out of cover is effective and aiming is responsive, even if the tiny targeting reticule can be difficult to see at times. Mashing a button to sprint gets old when doing any kind of chasing or extended physical activities (like running or biking), but that’s about the only drawback.

While I’ve never been the biggest fan of driving in the series — I often felt like speeds got so excessive that it became almost impossible to do more than hope you don’t have to change direction or avoid anything during high-speed chases — I have to say that this the best work Rockstar has done in that department. Cars seem to respond more favourably to subtle adjustments, and as a result I was able to pursue vehicles effectively whilst weaving through traffic. Vehicles also feel very different, and the ability to customize their attributes and boost your characters’ driving skill is a nice touch.

Unfortunately, things are ending on a sour note as flying airplanes and helicopters rates as some of the least enjoyable moments I’ve had in any GTA title. At the heart of the issue is what appears to be some sort of simulated turbulence, which causes all air travel to be plagued by shaking. As a result I felt like I was constantly tinkering with the controls, even when trying to do something as simple as fly straight or hover in place. It’s way too easy to lose any semblance of command during flights as well, which led to a number of reloaded checkpoints in what should’ve been basic scenarios.

When it comes to creating environments that feel organic and lived in, nobody does it any better than Rockstar, which has painstakingly crafted an immersive, detailed version of Los Angeles. It’s not the historic representation seen in LA Noire, of course, but the stylized Los Santos still does a great job of capturing the essence of the real city. There’s always plenty of activity as well, and while some of the A.I. driving is laughably inept, wandering the city never gets stale.

Character design and animation is also first rate, and the way the series continues to run all of its cut scenes from the in-game engine is a testament to how good everything looks. If you want to nitpick you can talk about the draw distance and texture pop in, but it seems a small price to pay for the kind of freedom GTA V offers while maintaining a solid frame rate throughout.

I’ve long been a huge proponent of Rockstar’s work on the audio side, and once again it’s culled top notch performances from all the major (and nearly all of the minor) characters. That caveat is reserved for Wade, whose appearance and voice stuck out like a sore thumb — I cringed every time he uttered a syllable. The substance of the dialogue could also be a bit grating at times — there is a lot of conflict between the main characters — but it’s always well delivered. In terms of the soundtrack, there’s a nice selection of radio tunes and original music to accompany the action.

Unlike previous games in the series, Grand Theft Auto V follows three primary characters with an over arcing storyline that ties them together. There’s Franklin, a street-level hustler looking to make his way out of impoverished surroundings, Michael, a “retired” bank robber living with his dysfunctional family, and Trevor, a meth dealer/gun runner and former associate of Michael that also just happens to be bat-shit crazy.

It’s a colourful collection of personalities to be sure, but make no mistake, this is Michael’s story first and foremost. And while both Trevor and Franklin lead their own lives away from him — you’re generally free to switch between them at any time to pursue primary/side missions or just wander around and cause havoc — things always circle back when it’s time to advance the main plot, which, as you’d suspect, is rife with corruption, betrayal and all kinds of bad behavior.

Although larger in scope and more ambitious than Grand Theft Auto IV, the game does have one major weakness its predecessor did not: none of the three characters are particularly likeable. They all have their charms at times, but the constant bickering between Michael and Trevor eventually wears thin, and Franklin’s almost equally confrontational relationship with his running buddy Lamar does little to build any warm, fuzzy feelings. Whereas Niko seemed like a good guy doing bad things, everyone with a meaningful role in GTA V is just a bad person.

Missions trigger in standard fashion as you travel to a designated point on the map, watch some piece of story advancement and then proceed. Most of the game’s main missions are excellent and really show off what the game is capable of. The various heists, which allow you to choose your approach and hire a crew, are great, and I would’ve happily signed off on additional ones. Doing the advance work, such as stealing vehicles or buying disguises, presents a nice calm before the storm and gives these otherwise relatively uninteresting activities some context.

That’s not always the case, however, and it led me to dip into my bag of movie quotes to pull out Jeff Goldblum from Jurassic Park, in which he says they were “so preoccupied with whether or not they could, they didn’t stop to think if they should.” Some of the activities you partake in feel like filler (something that’s absolutely not needed in a game of this scope) and/or are downright boring. Some offenders are tucked away in the optional missions, but others are required, such as one that has you moving crates around a loading dock and then driving cargo at incredibly slow speeds.

You also spend a ton of time traveling from Point A to Point B during missions, whether by car or aircraft. The game typically uses these moments to have the various characters engage in conversation, fleshing out the narrative with occasionally interesting but ultimately disposable plot points. That’s fine the first time around, but if you’re ever forced to retry it can get annoying.

If it sounds like I’m down on Grand Theft Auto V, I’m not. It’s just that, while I understand you can’t have flows without ebbs, these fairly lengthy sections of glorified down time add up when all I want to do is get to the part when the mission actually takes place. In some ways it’d be like finding out Nathan Drake needed to go from Egypt to the Amazon, but instead of just covering that with a quick cut scene you had to fly the plane yourself for 10 minutes while he bantered with Sully.

Beyond the storyline, there’s an embarrassment of activities available here. You can golf, play tennis, practice yoga, enter triathlons, try your hand at the stock market, buy real estate, collect cars, base jump, customize your vehicle, hit up strip clubs and more.  And that doesn’t even touch on the fun that can be had just driving around and causing no end of mayhem. Not to mention that a full multiplayer suite (Grand Theft Auto Online) is launching in October.

Although it stumbles with pacing here and there, Grand Theft Auto V has more than enough highs to brush off the relative lows without a second thought. There’s so much to do and see that this could easily keep you occupied until the new consoles arrive, and beyond.

By Herija Green
This entry was posted on Saturday, September 28th, 2013 at 4:42 pm and is filed under Herija Green, Video Game Reviews. You can follow any responses to this entry through the RSS 2.0 feed. Both comments and pings are currently closed.