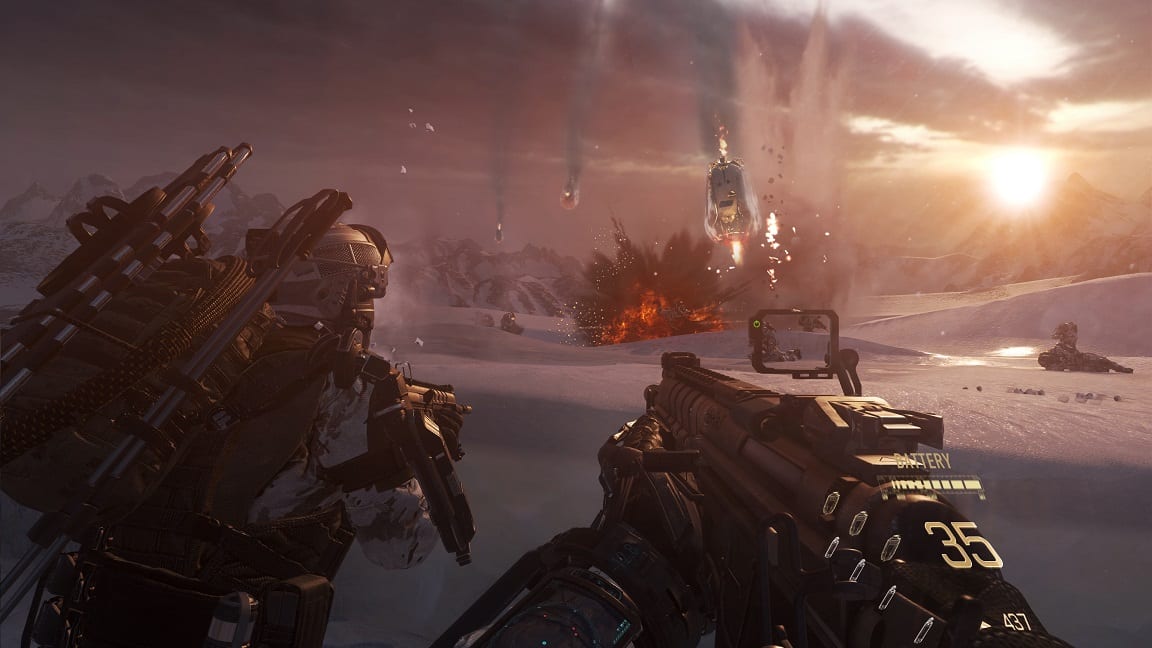 Look out for the AT-ATs!

While there may not be a more bulletproof IP in the world of console gaming than Call of Duty, this felt like a big year for Activision’s goliath. Ghosts, last year’s iteration that came out just as the Xbox One and PlayStation 4 were launching, endured probably the series’ harshest criticism from reviewers for failing to make any noteworthy innovations. This year also marks the start of the three-year developmental cycle with Sledgehammer Games being given the reins for the first time.

So, is Call of Duty: Advanced Warfare a step forward for the series? Let’s suit up and find out.

There have been a few changes to the standard CoD setup. Most notable is the exoskeleton, which allows you to do things like double jump and quickly boost away from enemy fire. There are other new abilities associated with the exo as well, but most of those are used contextually during the campaign. So, while the boost jump is easy to do with accuracy, the directional boosts feel a little clunky mapped to the left analog stick and activated when it’s pressed down.

When not on foot you’ll control a handful of different vehicles, and, whether on land, sea or air, they tend to be responsive. The on-rails(ish) flying segment is probably the weakest of the bunch as it’s a little too easy to steer into something accidentally and a little too imprecise to accurately shoot enemy aircraft. Still, any complaints here are minor.

Whereas Ghosts had last-gen roots, Advanced Warfare makes a significant step forward in the visual department. As with most Call of Duty titles, the campaign will take you to numerous parts of the world with varying climates. It’s not the best looking game we’ve seen on next gen, but it does a nice job of putting together a futuristic world with contemporary roots. The design of the tech is very sleek, and the cut scenes are easily the high point for the series.

Just in case you couldn’t tell from the pre-release promotional materials, Kevin Spacey is the game’s central figure, and he delivers a typical Spacey performance. The rest of the voice acting rates as solid, including Troy Baker, best known for his turns in The Last of Us and BioShock Infinite, though like most shooters you’ll wish they had more to work with as it’s nearly impossible to create connections in such short bursts. Weapons and explosions sound great and pack a real punch.

Set 40 years in the future, Call of Duty: Advanced Warfare follows Private Mitchell (Baker), who is wounded in an operation that also claims the life of his best friend, Will Irons. Discharged due to the severity of his injury, Mitchell is given a cybernetic limb by Jonathan Irons (Spacey), Will’s father and CEO of the private military sect Atlas, and sent back into the field as part of an elite unit.

What follows is pretty standard fare for the series. You’re tasked with hunting down the leader of the terrorist organization KVA, a man known as Hades, who is responsible for a collection of heinous attacks around the world. There’s lots of intense set pieces, you get to control numerous different vehicles and mechanized weaponry, visit diverse locations and survive no shortage of calamities over the course of your adventure.

It’s an enjoyable campaign, probably our favourite since Modern Warfare 2, but it definitely leaves some things on the table. Despite the introduction of the exoskeleton and lots of new tech (variable and homing grenades are awesome), this still feels very much like past games. A lot of time is spent with A.I. teammates leading you through linear levels, and it rarely opens up to allow you to try different things — your loadout is selected for you, and sections in which you need to use your exo’s abilities are scripted and clearly spelled out.

Where you can take those newfound abilities for a test drive is multiplayer. It’s the true lifeblood of Call of Duty, and it benefits the most from the change. Verticality is the key word in Advanced Warfare as maps are now designed with multiple tiers, allowing you to go up and over your enemies. It’s not as frenetic as trailers have made it look, and it doesn’t feel like Titanfall, either, despite having some of the same concepts in play (jetpack boosts, vertical level design).

Calling the changes liberating might be an oversell, but it has absolutely altered how things play from match to match. Camping seems greatly reduced and less effective since it’s more difficult to cover approach points at varying altitudes. Things appear more tactical in general, something we’ll take every time over pure reflex-based combat… though make no mistake, your head really needs to be on a swivel now. Advanced Warfare also expands on the popular “Pick 10” create-a-class with “Pick 13” allowing for plenty of unique approaches.

There are a couple issues worth noting with multiplayer. First, the exo abilities (shield, health boost, invisibility, etc.) aren’t very effective. It’s easy to spot an “invisible” foe, you almost never have time to engage a health boost when being shot and so on. Second, the game needs a tweak to the respawn system. We’re all for getting right back into the action, but allowing almost instantaneous returns (often close to where you were killed) permits an unreasonably high number of revenge kills.

Rounding out the offerings is the co-op mode Exo-Survival. Here you’ll join forces with up to three others to fend off waves of enemies, accruing points for finishing rounds and using them to get better stuff. It feels like an evolution of Modern Warfare 3’s Spec Ops Survival, and, while it’s fine for what it is, it’s the not equal of Ghosts’ Extinction mode (or Zombies).

Call of Duty: Advanced Warfare is a step in the right direction for the series, introducing new gameplay elements to go along with a fun campaign and addictive multiplayer. It’s not the complete reboot some are clamouring for, but it’s a damn good shooter.

By Herija Green
Tags: Call of Duty
This entry was posted on Monday, November 17th, 2014 at 12:27 pm and is filed under Herija Green, Video Game Reviews. You can follow any responses to this entry through the RSS 2.0 feed. Both comments and pings are currently closed.