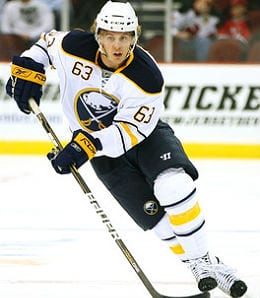 If Tyler Ennis is on your wire, grab him. (yshl.forumsactifs.com)

Now, before we go any further, we’d just like to point out that we’re not Canadiens or Sabres fan boys. They were just that good in Week Five. With that said, here are the week’s waiver picks.

Tyler Ennis, C/LW, Buffalo Sabres (ESPN: 20.4 per cent; CBS: 36 per cent): Ennis has just been put on waivers in our league, and we’re not sure why. He had a spectacular Week Five, scoring two goals and five points with a plus-3 rating, five penalty minutes, two power play points, 10 shots on goal, a hit and two blocked shots. In 19 games played, the youngster has six goals, 12 points, a minus-8 rating and 40 shots on goal. Give the undersized (5’9″, 169) Ennis credit for at least trying to take on bigger players, as you can see in the video below.

Matt Moulson, LW, Buffalo Sabres (ESPN: 23.6 per cent; CBS: 48 per cent): Moulson hasn’t been a dynamic offensive presence this season, but he had a very solid week with a goal, five points, a plus-3 rating, two power play points, seven shots on goal, one face-off won, two hits and one blocked shot. We’re not suggesting you pull the trigger on this guy right away, but keep your eyes on him.

Dale Weise, RW, Montreal Canadiens (ESPN: unowned; CBS: 1 per cent): Keep your eyes on this guy, because he had a pretty solid week if we do say so ourselves. Three goals, four points, a plus-4 rating, seven penalty minutes, five shots on goal, six hits and one blocked shot tends to make for a productive week.

Zemgus Girgensons, C/LW, Buffalo Sabres (ESPN: 0.4 per cent; CBS: 13 per cent): Like a few of his fellow Sabres, Girgensons had a very solid week, notching three goals, four points, a plus-5 rating, one shorthanded point, nine shots on goal, 19 face-offs won, six hits and five blocked shots. A versatile player, he brings a lot to the table especially in leagues with more statistical categories.

“Studs and Duds” is our weekly segment about who was hot and who was not in Fantasy hockey in the previous week. As you can see, our run on the Habs and Sabres continues below.

No. 1. Carey Price, G, Montreal Canadiens: No one had a better week of Fantasy hockey than Montreal’s No. 1 goalie Price. In three games, he collected three wins, a 1.34 goals against average, a .950 save percentage and a shutout. Yeah, not too shabby to say the least.

No. 3. Tyler Ennis, C/LW, Buffalo Sabres: We said it earlier above, and we’ll say it again – Ennis had a great week with two goals, five points, a plus-3 rating, five penalty minutes, two power play points, 10 shots on goal, a hit and two blocked shots.

No. 1. Mike Smith, G, Arizona Coyotes: Surprise, surprise… well… not really. Smith has been absolutely abysmal this season, and a 4.60 goals against average and a .842 save percentage in two Week Five losses have only further confirmed what Fantasy GMs already know — he stinks more than last year’s leftover tuna fish sandwich.

No. 2. Craig Anderson, G, Ottawa Senators: Anderson is arguably the best available goaltender on the waiver wire (and worth picking up), but he had a rough week with just one win, a 3.57 goals against average and a .889 save percentage through three games.

No. 3. Ray Emery, G, Philadelphia Flyers: Emery played just one game, but a 6.01 goals against average and a .786 save percentage were enough to cement him as this week’s No. 3 dud.

That’s it for Week Five. We know how we did, but we want to hear from you! Let us know in the comments section below.

By Dakota Case
Tags: Montreal Canadiens
This entry was posted on Sunday, November 16th, 2014 at 10:26 pm and is filed under Dakota Case, HOCKEY, The Wire Troll. You can follow any responses to this entry through the RSS 2.0 feed. Both comments and pings are currently closed.