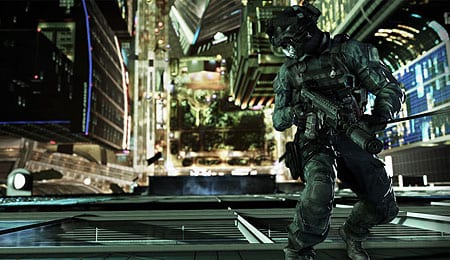 Everything looks better on the Xbox One.

While we already rendered our verdict on the Xbox 360 version of Call of Duty: Ghosts, Activision also released the game for the brand new PlayStation 4 and Xbox One consoles. There are only a couple of differences between the two, but we thought it was worth going back and sinking some more time into both the campaign and multiplayer. Let’s see what the next generation has in store.

Easily the biggest difference between the 360 and Xbox One versions is the graphics. Now, much has been made of Ghosts running at 720p (then upscaled to 1080) on the X1, as opposed to native 1080p on the PS4, but since the point of this review is to compare the next-gen version to the 360, we won’t be taking it into account.

With that out of the way, let’s get down to it. There is a noticeable bump in visual quality, particularly during the game’s campaign. There’s more clarity, the details are cleaner and there just seems to be more going on throughout the game. It’s not a night and day difference, and Ghosts certainly can’t go toe to toe with the likes of Ryse or Killzone: Shadow Fall, titles built from the ground up to look great on their respective consoles, though it’s easy to tell when going between the two.

There are definitely some levels where it’s more noticeable than others. We ended up playing through the entire campaign again, and we thought missions like Federation Day and End of the Line really popped on the new system. There’s just a level of refinement here that wasn’t possible with the 360, and it helped us enjoy our second trip through more than the first.

Beyond the improved visuals, there is one other important difference. The playlist Ground War, which supports 18 players, has been added (Infected, which was on the 360 version, now allows for 18 as well). Although six more bodies in a room may not sound like a lot, it really helps ratchet up the intensity that the larger maps sometimes lacked when restricted to 12 players.

Of course, given that a small fraction of people actually own an Xbox One compared to the 360, you’ll notice a much smaller gamer base, with some playlists operating with just a couple hundred people in them (a number practically unheard of for a Call of Duty title). That being said, we never had trouble finding rooms, and the performance was consistently smooth.

Unquestionably, Call of Duty: Ghosts on Xbox One is the superior version. It looks better, still runs at an unflinching 60 frames per second and has a more intense multiplayer that its 360 counterpart. If you’ve got the hardware, this is the one to own.

By Herija Green
Tags: Xbox 360
This entry was posted on Monday, December 9th, 2013 at 9:58 pm and is filed under Herija Green, Video Game Reviews. You can follow any responses to this entry through the RSS 2.0 feed. Both comments and pings are currently closed.