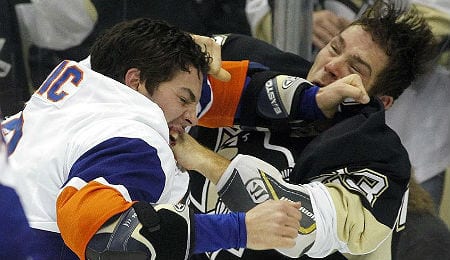 It’s been another great week of Fantasy hockey with surprise sleepers and studs lurking around every corner. Here at RotoRob.com, we’ve adjusted our teams accordingly and suggest you do, too. With that said, here are the week’s waiver picks!

Steve Downie, LW/RW, Pittsburgh Penguins (ESPN: 26.2 per cent; CBS: 27 per cent): As surprising as it may sound, Downie was last week’s No. 6 ranked Fantasy hockey player according to Yahoo! Sports. In three games, he collected a goal, three points, a plus-4 rating, 29 penalty minutes (see video below for a taste of his antics), three shots on goal, three hits and two blocked shots. The Pens have been so dominant lately, just about any of them available in your league are worth picking up, and Downie will most likely be the best of what’s available on the waiver wire.

Victor Rask, C, Carolina Hurricanes (ESPN: unowned; CBS: 2 per cent): Rask is a rookie, and he’s young, but his two goals, four points, plus-3 rating, two penalty minutes, two power play points, 15 shots on goal and 23 face-offs won made him last week’s 11th best Fantasy player. If you do decide to pick him up, don’t expect numbers like this every week, but it’s an encouraging effort by a talented player within a struggling organization. Keep your eye on Rask, but we don’t suggest you pick him up quite yet.

Michael Hutchinson, G, Winnipeg Jets (ESPN: 2.6 per cent; CBS: 10 per cent): The Jets have just about all the talent they need to succeed, except for the fact they have historically had arguably the worst starting goaltender in the league in Ondrej Pavelec. Hutchinson could be the answer they need. In one game last week, the youngster made 33 saves in a full 60 minutes of action to collect the shutout win. In three games this season, Hutchinson has one win, a 1.80 goals against average, a .945 save percentage and one shutout.

Michal Neuvirth, G, Buffalo Sabres (ESPN: 13.2 per cent; CBS: 16 per cent): The Sabres may be the front runners in the Connor McDavid/Jack Eichel Sweepstakes, but apparently no one has told Neuvirth that. In three games last week, the Buffalo netminder collected a win, a 1.91 goals against average and a .951 save percentage. It was a good week, but that doesn’t change the destiny of the organization. Proceed with caution.

“Studs and Duds” is our weekly segment on who was hot and who was not in Fantasy hockey in the previous week. Week Four’s honourable and dishonourable mentions…

No. 1. Craig Anderson, G, Ottawa Senators: It was a big week for Mr. Anderson. In three games, he collected two wins, a 0.65 goals against average, a .981 save percentage and a shutout. Anderson will never be considered elite, but there’s no question he never receives as much credit as he deserves.

No. 2. Alex Ovechkin, LW/RW, Washington Capitals: Week Four was a big one for Washington’s captain, who scored a goal and seven points with an even plus-minus rating, six penalty minutes, three power play points, 21 shots on goal, nine hits and two blocked shots.

No. 3. Filip Forsberg, C/LW/RW, Nashville Predators: You can bet the Capitals brass are kicking themselves for letting go of this guy. In 14 games with the Preds this season, the 11th overall pick of the 2012 NHL Entry Draft and Washington’s top pick, has six goals, 15 points and a plus-15 rating. Five goals and seven points came in Week Four, along with a plus-4 rating, two power play points, one game-winning goal, 20 shots on goal, four hits and two blocked shots. Things are about to get more exciting for the Music City’s hockey faithful than they’ve ever been before. This one’s going to be special, folks.

No. 1. Brian Campbell, D, Florida Panthers: Let’s just say Florida’s top rearguard has had better weeks. In three games, Campbell was a combined minus-5, had just fur shots on goal, two hits and four blocked shots. He has just three assists, 13 shots on goal and a minus-6 rating this season.

No. 2. Paul Stastny, C, St. Louis Blues: Stastny’s return to his hometown hasn’t quite been what everyone was expecting, particularly himself. He had zero points, a minus-4 rating, two penalty minutes, three shots on goal, eight face-offs won and one block last week.

No. 3. Valeri Nichushkin, RW, Dallas Stars: This kid is going to be undeniably scary someday soon. However, injuries and youthful inexperience have put a damper on his current performance. The young Russian winger had zero points, a minus-2 rating, one shot on goal and four hits in Week Four.

And that wraps up our coverage of Week Four. How did it go for your Fantasy team this week? Let us know in the comments below.

By Dakota Case
Tags: Pittsburgh Penguins, Steve Downie
This entry was posted on Sunday, November 9th, 2014 at 11:29 pm and is filed under Dakota Case, HOCKEY, The Wire Troll. You can follow any responses to this entry through the RSS 2.0 feed. Both comments and pings are currently closed.