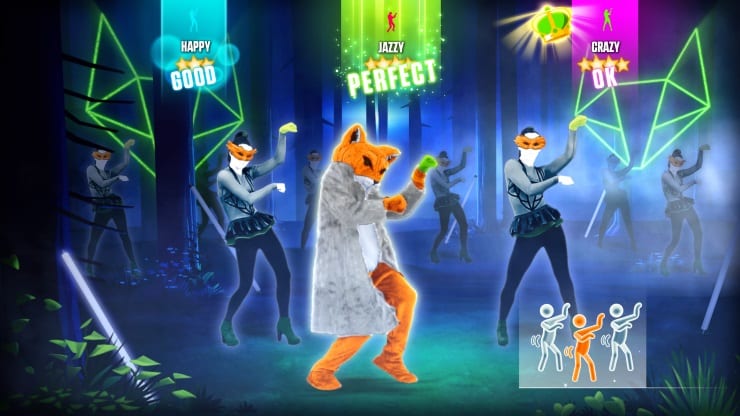 Four years have passed since Microsoft released the Kinect behind a massive marketing campaign that promised all kinds of excitement and innovation. Suffice to say, it hasn’t been the must-own add-on it hoped for, something it all but admitted by removing the peripheral from the Xbox One package and dropping the price — those of us that got it at launch had only one option, a US$499 unit with a Kinect.

While the Kinect has been more gimmick than game changer, it has its charms. And if there’s one genre that has benefitted from its invention it’s dancing games. Just compare the experience of playing one of the Just Dance or Dance Central titles against the Dance Dance Revolution arrow pad. Sure, they’re all fun, but DDR didn’t really require you to “dance” so much as move your feet very quickly.

Dance Central arrived on Xbox One with Spotlight in September, and now it’s time for Just Dance 2015 to bring us back onto the digital dance floor. So channel your inner Kevin Bacon and let’s dance!

It’s been a while since we had cause to plug the Kinect in, but upon firing it up and getting rolling it didn’t take long to remember just how much progress has been made in the 2.0 version. Movement tracking is very good and rarely did we feel we’d pulled off a move without being adequately rewarded for how well (or poorly) we’d done — in fact, it’s pretty forgiving. The game also features voice commands and a karaoke mode that takes advantage of the Kinect’s built-in microphone.

Circling back to that forgiving comment, one area in which Just Dance could not only improve but also help its players progress is by critiquing aspects of your movement. It’s something that Dance Central does by highlighting your limbs or whatever isn’t moving in correct sequence with the rest. Here the pre-rendered character just dances along and trusts you to fix your own missteps.

If you don’t have a Kinect but still want to get your virtual groove on you can download the official motion controller app from Ubisoft, which works with iPhone or Android. We didn’t test it because, well, we do have a Kinect, but it is available.

Colourful, flashy and occasionally strange, Just Dance 2015 is an engaging and abstract title to behold. To its credit, despite a screen loaded with all kinds of effects, you are never really distract from the task at hand. There is some legitimately odd choreography going on throughout, most notably the Tetris song and that semi-slow dance between an astronaut and a female alien, but it keeps things from getting too bogged down in song after song of straight dance routines.

Probably the biggest selling point of any new Just Dance title is the track list, and this year’s version offers 40-plus songs (with more available as downloadable content). While most of the tracks would be considered recent pop hits — “Problem” (Ariana Grande), “Happy” (Pharrell Williams), “Get Low” (Dillon Francis and DJ Snake) and so on — there are some “classics” to mix things up, highlighted by “Walk This Way” (Run DMC and Aerosmith) and lowlighted by “Macarena.” It’s a solid collection that sounds quite good playing through a sound bar.

If you’ve never played a Just Dance game before, the concept is simple: follow the moves being shown on the screen to the best of your ability and get scored for it. In that way it’s comparable to Guitar Hero or Rock Band, though here you’re actually performing the actions and not pressing coloured buttons on a guitar-shaped controller. As you’d suspect, the game skews young with lots of pop tracks, but it’s easy enough to be accessible to most ages.

Now, to be clear, easy does not imply that the game isn’t physically demanding. You need to be ready to garner some measure of a workout with certain tracks exacting a more significant toll than others. We won’t guess at every player’s conditioning, but rest assured there’s a substantial enough curve that you should be able to find your sweet spot.

There is no career to speak of, which undercuts the appeal for solo players to some extent, though the returning World Dance Floor mode is meant to fill the gap. This allows you to play against other players online and removes some of the innate monotony of dancing alone. It’s a social component that’s complemented by the addition of Challenger Mode, which has you compete against high scores from other dance aficionados whether they’re around or not. It provides a goal and something to measure success by.

None of that is a substitute for having other people around, however, as much of the fun in Just Dance 2015 comes from rocking out with friends and family. The post-routine highlight reels that show how you looked while dancing are lots of fun, and they can easily be shared online so that others can join in the fun and/or humiliation.

Other modes include Karaoke, in which you add singing on top of your dancing (probably not the best idea for those that don’t have some cardio fitness), and Sweat, in which the game stops judging your attempts at dancing and starts judging how many calories you’ve burned.

For whatever the Kinect hasn’t become, it does a nice job with games like this. Just Dance 2015 has an enticing look, plays smoothly and is a lot of fun when cutting a rug with your friends. Let’s dance!

By Herija Green
Tags: Microsoft
This entry was posted on Tuesday, November 11th, 2014 at 4:33 pm and is filed under Herija Green, Video Game Reviews. You can follow any responses to this entry through the RSS 2.0 feed. Both comments and pings are currently closed.