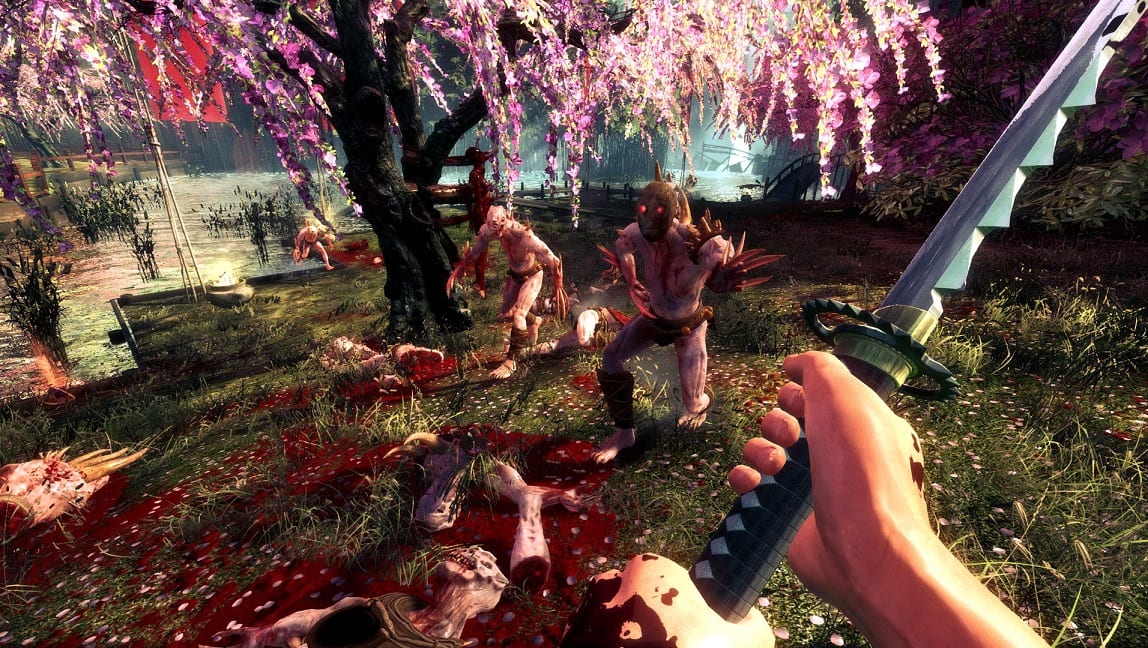 Swordplay is the best part of the new Shadow Warrior.

The original Shadow Warrior was intended to be 3D Realms’ big follow up to Duke Nukem. Crass, violent and very over-the-top, it developed a cult following while offending quite a few people with its caricature of a main character (which was kind of the point, but we digress). Lo Wang has returned, this time as a much younger man in a combination reboot/origin story. With his voice toned down and old-school design sensibilities, does it fare any better than the ill-fated Duke Nukem Forever?

Shadow Warrior is designed to be a throwback, but the controls are perfectly modern when it comes to FPS games. You’ve got your general set of jump, duck and run controls, along with primary and secondary attacks after selecting a weapon off the wheel. Lo Wang gets involved with some demonic magic too, which is activated by a trigger button combined with specific analog movements. On the PS4, these can also be activated by the touchpad, though this is inaccurate and somewhat gimmicky.

Though it’s based on a game from the ’90s, the new Shadow Warrior looks decidedly dated in a different way. Environments and characters could have been plucked from an early PS3/Xbox 360 era title, and in some cases, look like they could be a Half Life 2 mod. It doesn’t help that some environments can be really empty and repetitive once you clear out a batch of enemies.

One of the original’s most distinctive elements came in the voice work of Lo Wang — a performance that was essentially a bad b-movie impersonation, which worked in a lovely, ridiculous way. This version is more grounded in reality, and while there’s nothing particularly bad about the voice work, it lacks the over-the-top silliness that made the original so memorable.

There’s definitely an old-school vibe to Shadow Warrior, and the game gets you in the mood by showing gameplay footage during the initial load screen. From waves of enemies to health kits, this is a far cry from modern FPS games, and some will certainly appreciate that. This is augmented by a power system with RPG-style advancements, which allows for partial healing, super weapons charging and more.

Unfortunately, some of the drawbacks of old-school design also made it through the digital time warp. It’s fine that the game is built around combat rather than set pieces, but what happens following combat is unfortunate. Empty areas become the norm, not the exception, and without a map or goal indicator, you’re left wandering around, sometimes for a corridor tucked away in a nondescript corner.

The gunplay is solid, not spectacular. A multitude of weapons — some special ones that fans of the original will recognize — provide for plenty of shooting. The enemies lack any intelligence in the AI, though, and they come with pretty strange physics to boot: we had several moments when dudes literally flew across the screen from a single shot.

Fortunately, the game works when it comes to swordplay — or as the original Lo Wang would say, a personal weapon. Many first-person melee weapons feel empty and weightless. Shadow Warrior’s sword slashes come with appropriate violence, so when you connect, you’ll know it. Various slashes are available, and while the dismemberment doesn’t come with the real time physics of Metal Gear Rising, there’s enough blood and preprogrammed hit detection for enemies to fall apart in a sensible way.

Good sword action is undercut (pun intended) by technical mishaps and poor design decisions, and for a reboot of a game known more for its personality, the modern Shadow Warrior feels like it’s both trying too hard and lacking in personality. Who want-a some Wang? Not this time around, unfortunately.

By Mike Chen
Tags: 3D Realms, Duke Nukem, Shadow Warrior
This entry was posted on Friday, November 7th, 2014 at 7:51 pm and is filed under Mike Chen, Video Game Reviews. You can follow any responses to this entry through the RSS 2.0 feed. Both comments and pings are currently closed.