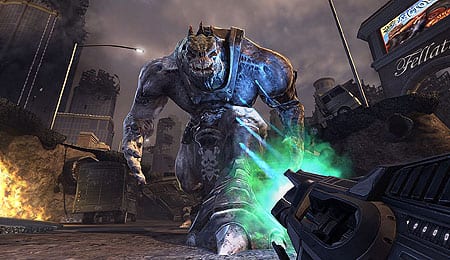 Forever is a long time coming.

By now you’ve undoubtedly heard the tale of the lengthy developmental cycle of 2k Games’ Duke Nukem Forever so there’s no need to rehash the title’s 15-year journey. Suffice to say that the fact this game ever saw the light of day is a testament to 3D Realms’ perseverance — and that it remained so highly anticipated is a credit to the game’s fan base. After all this time, though, there’s only one question that bears answering: was it worth the wait?

Unless you swore off shooters for the last decade-plus you should have no trouble jumping right in. As Duke Nukem, you can carry two guns, two explosives and one each of a series of usable items (beer, steroids and a hologram). The basics are fine in terms of button layout and function, but there’s an undeniable lethargy to Duke’s aiming. As a first-person shooter veteran that tends to be very accurate I found there was a definite adjustment period. Moving the crosshairs just isn’t all that responsive, and I ended up compensating by aiming at a more deliberate pace.

That Duke Nukem Forever cannot stand toe-to-toe with modern shooters visually should come as no real surprise considering the game’s genesis occurred, well, during the era of the Sega Genesis. Obviously the graphics have been bumped up and improved since then, but this retains the appearance of a first-generation Xbox 360 title.

More damning than the slow-loading textures, though, is the general lack of variation and detail work in the environments. Having Las Vegas, a location packed with gaudy over-the-top visuals, be one of the game’s primary settings really serves to hammer home just how uninspired the areas are. Plus, even with a modest level of detail the frame rate still takes a pounding at times. It’s not limited to when the action gets frantic, either, as there are some moments that tend to get bogged down no matter what.

Musically there seems to be a never ending selection of guitar music playing through levels and loading screens. It never got on my nerves, nor did it add much. The voice acting will likely be an acquired taste, based primarily on whether you enjoy Duke’s monotone coolness. Granted, a lot of the source material for his one-liners pre-date Duke Nukem 3D, but it fits the general vibe of the game.

Set roughly a dozen years after the previous game, Duke Nukem Forever picks up with Duke having become a global phenomenon. All is not right in Duke’s dukedom, however, as those alien SOBs he vanquished have returned flying a flag of truce. Well, Duke isn’t buying it, and as it turns out, he’s right. The aliens are back to exact their revenge by… stealing Earth’s hot women. It’s mostly nonsense and loses steam quickly, leaving the game’s attitude and action to push the title forward.

Let’s start with the attitude. If I may bastardize The Rock’s catch phrase, Duke is a beer swillin’, pigcop killin’, steroid poppin’, panty droppin’, eyeball pissin’, Halo dissin’ antihero. He objectifies women, hurls insults at every turn and quotes plenty of Arnold Schwarzenegger lines along the way. Duke earns “ego” points throughout his adventure by doing things like pumping iron, humiliating enemies and leafing through porn he finds laying around. Each manly activity increases his “ego” bar, which is the game’s version of a health meter. Once it’s depleted your vision begins reddening Call of Duty style and you’ll need to find a safe haven from your attackers to heal.

Duke’s attitude is one of the main ways in which Duke Nukem Forever differentiates itself from other first-person shooters on the market. His antics are juvenile and lack any semblance of sophistication (humour doesn’t get much more low brow than an achievement for picking up a turd), but I found much of it a fun distraction from the hyper realism so many shooters are striving for. That being said, the humour won’t appeal to everyone.

In terms of the action, Duke Nukem Forever unfolds differently than other shooters you’ve played recently. Instead of advancing from one set piece to another, the shooting segments are broken up quite liberally by various puzzle and platforming elements (think Half-Life 2). Some may find this a refreshing change, while others will grow weary of it long before the game winds to a close.

When the bullets are flying the game is fairly fun even with the aforementioned sluggish controls and underwhelming A.I. from your foes. There’s a simplicity present that allows it to stand out where so many of the Call of Duty, Battlefield and Medal of Honor firefights blur together. Whether it’s a battle as a miniaturized Duke that has you using condiment jars for cover or an old West style shootout, there are plenty of unique encounters.

However, while there are definitely enjoyable elements at work here, there are also plenty of missteps along the way. Among the most frustrating are the long load times (a legit 30-to-45 seconds) you’re forced to endure throughout the game’s campaign. It’d be one thing if these load times occurred only when you reached a new chapter, but when they happen after every single death it becomes tiresome.

There’s also the issue of the game’s pacing. I touched on it briefly above, but there are times when it feels like sections were added for the express purpose of stretching the campaign.  A handful of driving sections, particularly one inside a casino, stand out as feeling like they went on far too long, though they pale in comparison to the Strip Club level, where an ultimately pointless X-rated scavenger hunt brings the game’s momentum to a screeching halt.

Some of Duke Nukem Forever’s attempts at humour fall flat as well. Most notable is a level that has Duke discovering the fate of Earth’s women at the hands of their alien abductors. In short, they’re being violated sexually (complete with a bizarre mix of moaning and crying) so that they can serve as hosts for more aliens. As you locate these helpless (and topless) women you’re given two choices: kill them yourself or watch tiny critters burst forth from them. I personally found it weird and unfunny, but I suspect plenty of others will have a much stronger negative reaction to it.

The game also features online multiplayer, which feels decidedly dated. Beyond murky graphics and simplistic level design there are only a handful of modes available, which are populated by a mix of awkward aiming and melee combat. By far the most effective weapon online is the grenade, which is why every match seems to have constant explosions as people hope the splash damage can do what their inaccurate firearms cannot. On the plus side, it’s balls out from start to finish.

For those that stick with the multiplayer there is a progressive leveling system similar to what we’ve seen with Call of Duty where bonus points are awarded for killing a certain number of enemies with melee attacks or blowing someone up after you die. Advancing unlocks new items to don in combat or also decorate Duke’s penthouse suite, which is actually a pretty cool feature.

After 15 years of varying degrees of hype and anticipation, Duke Nukem Forever has finally arrived in all its uneven glory. And while it’s far from the most refined or polished game you’ll play this year, its campaign delivers more hits than misses — if you’re in the mood for some mindless fun you could do a lot worse than this.

By HC Green
This entry was posted on Friday, June 17th, 2011 at 10:46 am and is filed under Herija Green, Video Game Reviews. You can follow any responses to this entry through the RSS 2.0 feed. You can leave a response, or trackback from your own site.