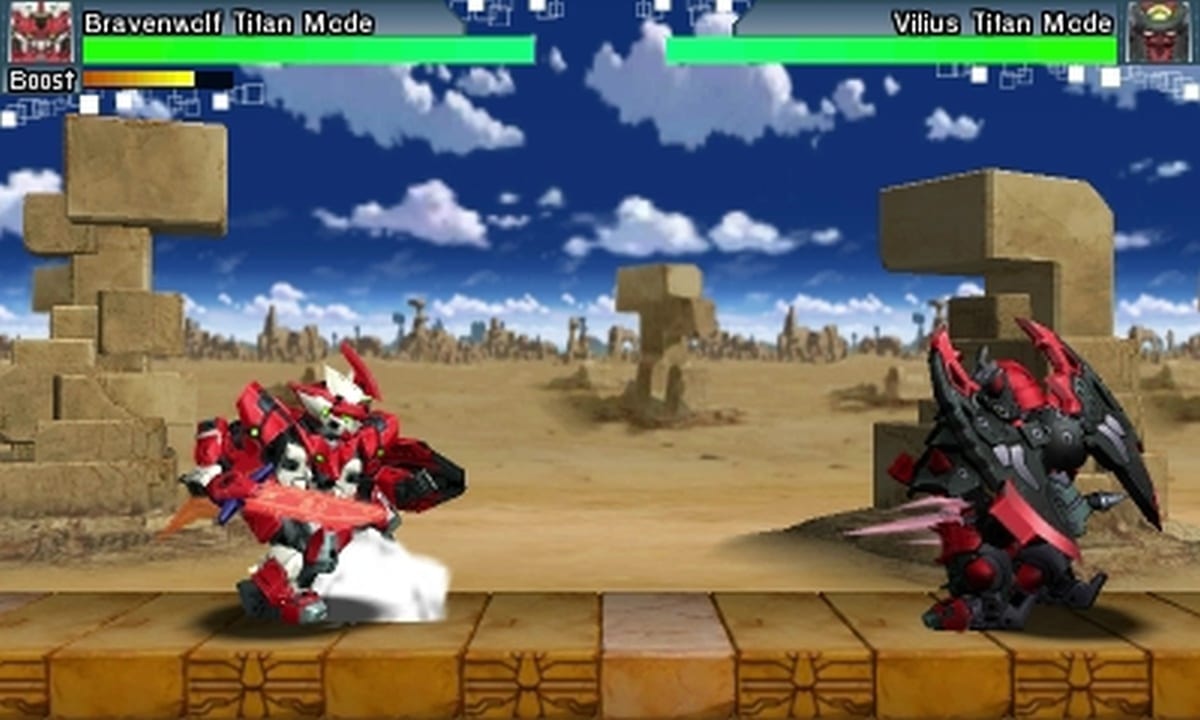 As someone who works in the arts, we know the sinking feeling of dread when presenting unfinished products. We’re hoping this is the feeling that Bandai Namco has right now because if Tenkai Knights: Brave Battle is an example of its best work, it may be in trouble.

Unfortunately, one of the weakest aspects of Tenkai Knights is its clunky controls, specifically the jumping mechanic. Jumps can be executed directly up or to the side. Unlike the majority of 2D platformers and brawlers, though, the game does not allow for trajectory adjustments mid-leap. This exclusion complicates what should be simple actions, like climbing stairs or, more importantly, maneuvering around an opponent. Also, all characters jump like they’re on the moon, but then crash to earth with astonishing speed. The physics engine was obviously not the focal point.

Tenkai Knights supports both d-pad and circle pad inputs, but the game is clearly designed with the d-pad in mind, especially since the main menu cannot be accessed by the circle pad. The entire point of having a circle pad is to allow for more precise analog movements, but Tenkai Knights ignores this in favour of an outdated control scheme.

Both graphics and sound are hit and miss for this game. Gameplay is strictly split into cut scenes for plot development and missions where action takes place. The cut scenes look cheap and unfinished. Each character is represented by a poorly drawn thumbnail headshot, which subtly changes with hard cuts to suit their emotion. Minimal animation is used, which is ironic for a game based on an anime.

That being said, the battles themselves look markedly better, which makes us wonder why the same care wasn’t put into the cut scenes. The characters look much smoother, but the environments suffer from lack of detail and variety. Additionally, a nearly ubiquitous glitch enables flying enemies to pass directly through objects, and when fights get hectic, the frame rate slows significantly.

Tenkai Knights presents a very limited soundtrack, which alternates between a badass battle theme and generic elevator music. You might be able to tell which composition we prefer. Voice acting is equal parts sparse and terrible.

If we had to describe Tenkai Knights: Brave Battle in one sentence, we would call it Super Smash Bros. with Lego Power Rangers, but without the magic that made each of them great. Seriously, the resemblance between every character on Quarton, the planet on which the battles take place, and the Lego figurines is borderline plagiarist.

The story, although based on the anime, is the generic “young character becomes chosen one to save the world” stock plot gamers and anime/manga consumers have seen a million times before. The writing is equally predicable and boring. It’s entirely possible to not read anything and still complete the game.

The main beef we have with Tenkai Knights is the level design and quality. This game draws heavily from established 2D brawlers, but it lacks the polish. Most levels consist of a simple, repetitive command: destroy X number of enemies. Sometimes the objective changes to collecting X number of items or surviving for X number of seconds. No matter how you look at it, each objective is pretty much the same thing with minimal repackaging.

To dispatch with your foes, the player may choose one of the four Tenkai Knights to embody, each with unique stats. These stats can be boosted by customizing and creating new equipment. Although each of the Knights comes with their own signature weapon, all weapons can be wielded regardless of the user.

Customizing weapons and armour requires a variety of items: a base item, coloured cubes and special items. Defeated enemies drop these at random, except for special items, so collecting specific items can be difficult. Additionally, all customization is very expensive, so upgrades come slowly, especially for the stronger pieces. The vast majority of equipment is password protected, so you can’t create it.

Tenkai Knights also uses a targeting system in battle, though it is very broken. Once locked onto an enemy, the player is forced to always face it, which makes battling multiple opponents virtually impossible.

Breaking target lock is also quite difficult. Instead of reverting to normal mode, the lock automatically jumps to the next closest enemy, regardless of whether or not they are onscreen. If not, the player is still forced to face them constantly. After cycling through all enemies, then the player may revert to normal. Since enemies spawn infinitely, this may take a while. In short, the system is completely broken.

Enemies have incredibly bad AI as well. They’ll usually just pace back and forth around their platform until they notice you. If you play your cards right, the enemies not even be able to touch you. In one instance, we had to survive for X seconds and the enemy repeatedly jumped over us until the timer ran out.

Be careful when approaching long-range opponents because their attack animation predicts your movements, making the first hit unavoidable. In fact, there are numerous instances of unavoidable damage, especially from bosses.

The difficulty level varies dramatically. Most are painfully easy, but others seem near impossible. These impossible stages can usually be quickly overcome by discovering a small exploit in the foe or situation, whether it be a real game mechanic or glitch.

This kind of game makes us sad. With the broken controls, sub par graphics, counterproductive targeting system, nonfunctional AI and boring and forced story, one can only say this: there are simply too many problems to make Tenkai Knights: Brave Battle a fun experience.

By Matthew Striplen
Tags: Bandai Namco
This entry was posted on Thursday, October 23rd, 2014 at 2:19 am and is filed under Matthew Striplen, Video Game Reviews. You can follow any responses to this entry through the RSS 2.0 feed. Both comments and pings are currently closed.