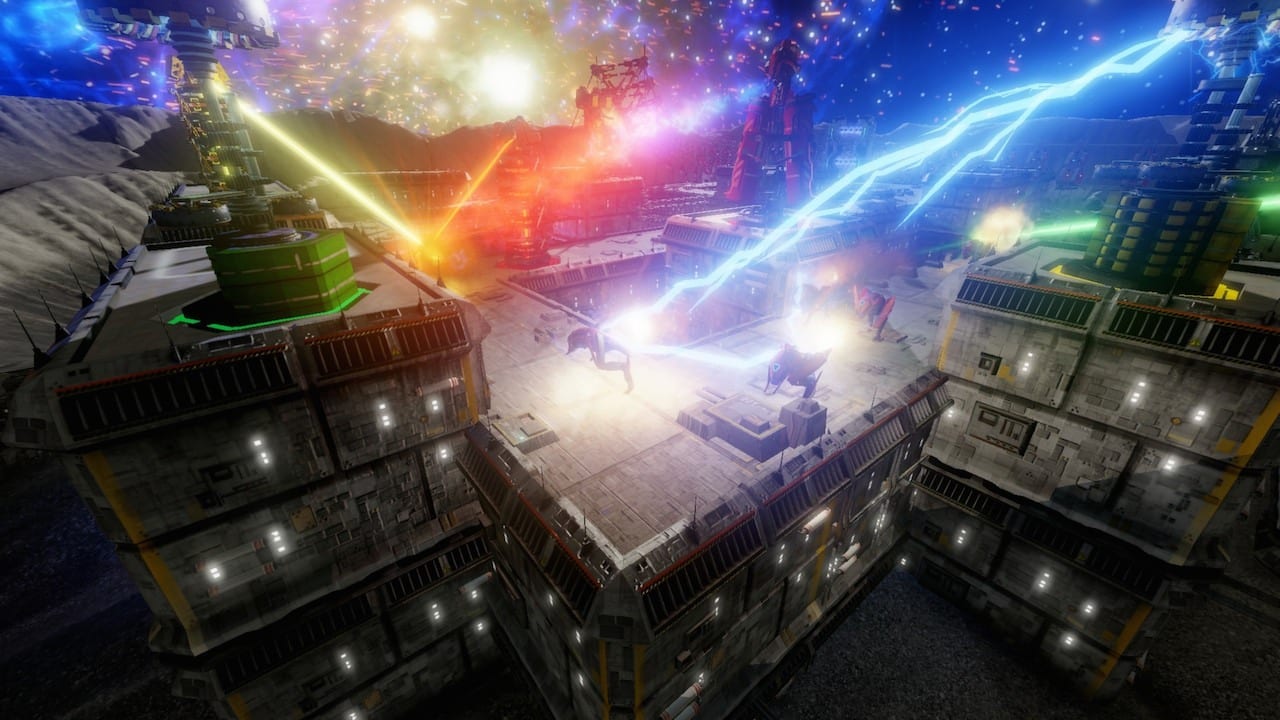 Few things are quite as beautiful as involuntary extraterrestrial fireworks.

Defense Grid 2, by Hidden Path Entertainment and 505 Games, is a sequel to 2008’s Defense Grid: The Awakening. As you’d expect, the story is a bit thin here, but as this is a tower defense game, this should surprise no one. The real question is do the tactics and gameplay stack up to the standards set by the wonderful original? Or should you build a tower high and as far away from this game as you can?

Part of the beauty of the first game was how wonderfully it controlled and how easy it was to pick up. The same scheme is back and actually feels a bit stickier when selecting towers, and in this case “sticky” is used as a positive adjective. Pressing “X” selects a tower plot, and from there on you can navigate a small menu using the thumb stick or d-pad to start the tower construction. Circle, as one would expect, cancels a selection or closes a menu.

All in all, it’s very simple and fully functional right from the get-go. You may also zoom in and out and rotate the map using the right stick, and unleash a super power using R1. Did you mess up bad? Think you could fix your mistake if you could only go back in time to the last checkpoint? Oh just press L1 and you’ll jump back in time, almost as if by magic.

Most tower defense games set the stage, and that’s pretty much it. Defense Grid 2 changes up a little bit by not only providing lively, twisting and jostling towers, but also level design that changes as you play. Enemy design is a bit generic, but amidst the crisp lighting and vibrant pyrotechnics it’s pretty tough to notice that the stream of aliens you’re obliterating all start to run together in terms of aesthetics: this one’s got spikes on top and a blue stripe here, and that one has got spikes on the side and two blue stripes.

Really, if you don’t pause the game to just look at the character models, you likely won’t notice because you’ll be far too busy building and upgrading towers. Towers blow stuff up real nice, too: cannons from afar will set a nice smacking explosion of engulfing flame upon the enemy, and thick laser beams sear away at the layers of their otherworldly targets. The point is, particle effects are pretty darn nice here.

The voice acting is actually tolerable throughout the entirety of the game, and the sound effects for the guns and the various screams of an alien perishing are great. However, the music tends to get a bit repetitive and unnoticeable. “Repetitive music? In a tower defense game? SHIIIIIIIIIIIITTTT…”

Although the game’s focus is hammering the player into a hardened min-max pro, you don’t have to be godly at micromanagement to have a fun and successful time with Defense Grid 2. You’re still able to manipulate the speed of time, so if you’ve got what you think is a solid line of defense, crank up the speed and test out your theory! This can be a dangerous move, though, since, as mentioned above, the levels can change in an instant.

For example, you’ve just completed a series of laser towers to give the aliens something real to think about, when all of a sudden a new chunk of land shifts into place from above or below. This is providing the enemies with a fresh new place to try to seek refuge from your towers, and a new place for you to fortify and expand. These on-the-fly changes keep things lively throughout.

Tired of the vanilla defense spree? Try throwing on some gameplay mods like “100 Waves” or the modifier that only lets your towers shoot enemies that your cursor is above. There are over 15 mods to choose from, and each one of them adds a different taste of challenge to the plate.

Unfortunately, multiplayer isn’t truly necessary or fun in this installment. In Versus mode, you kill aliens as usual, but the aliens you kill are immediately transported to your opponent’s screen. In co-op you and another player are set with a stage to clear, but it’s never really practical or fun unless you are matched up with a friend in party chat.

You also share a resource pool in co-op, which, if there’s no communication, turns the players into each other’s worst enemy as you’ll often spend money on an upgrade whereas your partner was waiting for enough cash to build a new tower. In summation, stick to single player.

Defense Grid 2 could have almost been the perfect tower defense title, if only the shaky multiplayer mode had been smoothed out. Not that an optional addition has any true bearing on the main game, but it tarnishes the overall package just a tad. Aside from the unnecessary multiplayer mode, the game is simply wonderful. Pros and casuals alike will find much fun to be had in Defense Grid 2.

By Jeff Cater
This entry was posted on Friday, October 10th, 2014 at 10:42 pm and is filed under Jeff Cater, Video Game Reviews. You can follow any responses to this entry through the RSS 2.0 feed. You can leave a response, or trackback from your own site.