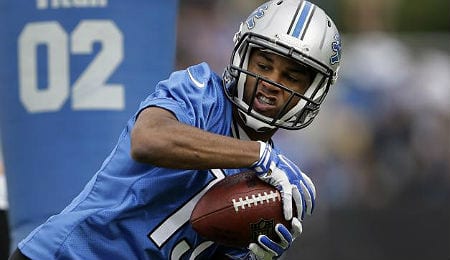 There have been quite a few high profile injuries and suspensions so far this year, and hopefully you’ve drafted for depth and have been working the wire, but even if you have, as we always say “it’s not who you get, it’s who you start.”  Here are your Week Six Start ‘em, Sit ‘em picks.

Golden Tate, WR, Detroit Lions @ MIN: It seems as if Tate has finally started to develop a relationship with Lions QB Matthew Stafford. This newfound bond is surely the result of number one receiver Calvin Johnson’s ankle injury, as we discussed on this week’s Podcast. Well, as of Wednesday that injury is persisting, setting up Tate (at least for a week or two) to be Stafford’s new golden boy (sorry, couldn’t resist). Hell, Tate is even getting kudos from the pundits for calling out Jim Schwartz as a douche (see video below).

Devin Hester, WR, Atlanta Falcons @ CHI: Hester has been pretty forthcoming about his unhappiness in his final years with the Bears, and there is nothing we love more than a player with a chip on his shoulder facing off against his former team. Look for him to see more targets than usual as his new team tries to set him up to show the Bears what they’ve been missing.

Chris Ivory, RB, New York Jets vs. DEN: There are two main reasons why Ivory should be a good start in Week Six. First, there seems to be no reason for him to continue to share the ball as much, as it has become painfully clear that the other Jets running back (Chris Johnson) seems to be nearing the proverbial running back cliff. Secondly, the Jets will be facing off against Peyton Manning, and you can be sure they will do all they can to keep the ball out of his hands (and Geno Smith’s for that matter).

Mohamed Sanu, WR, Cincinnati Bengals vs. CAR: Sanu is basically the last man standing in the wake of A.J. Green’s turf-toe aggravation. Marvin Jones was suppose to be back by now yet another injury has held him out. Somewhere in that mess Sanu has 17 receptions for 234 yards and two TDs so far this season. He also has TD pass, so some more razzle-dazzle could be in store. The bottom line is Sanu is target numero uno regardless if Green plays or not. He has earned his stripes, so put him in your lineup and feel good about it.

Stevan Ridley, RB, New England Patriots @ BUF: The Buffalo Bills’ run defense has vastly improved since last year, and is now ranked as one of the best in the league. This is largely because of the addition of former Patriots linebacker Brandon Spikes, and if you witnessed the tweet-off he had earlier this year with some of his former mates, then you know that there is no love lost. With Buffalo having a chance to take sole possession of first place in the AFC East, we expect the Bills defensive unit to be especially motivated.

Ben Tate, RB, Cleveland Browns vs. PIT: Last weekend, Tate returned from a knee injury and had a great game. So why the sit? Well, that means he has been healthy for exactly one game, which — as odds suggest — means that he is almost assured to get injured this weekend. So, sit him.

Michael Crabtree, WR, San Francisco 49ers @ STL: The 49er’s offense as a whole has been pretty flat, but it seems Crabtree especially has been off his game. He is only averaging 9.8 yards per reception, and going against a solid St. Louis defense we just don’t see him coming around in Week Six.

Anybody on the Oakland Raiders vs. SD: As was discussed on the RotoRob Fantasy Football Weekly Podcast, there is just no one on the Raiders that we can get excited about. Perhaps the recent change in coaching staff will help, but even that will likely take some time to take effect.

Now it’s your turn. Let us know in the comments below who you plan to start and who will be on your bench in Week Six.

By Vaney Hariri
This entry was posted on Thursday, October 9th, 2014 at 11:18 pm and is filed under FOOTBALL, Start 'em Sit 'em, Vaney Hariri. You can follow any responses to this entry through the RSS 2.0 feed. You can leave a response, or trackback from your own site.