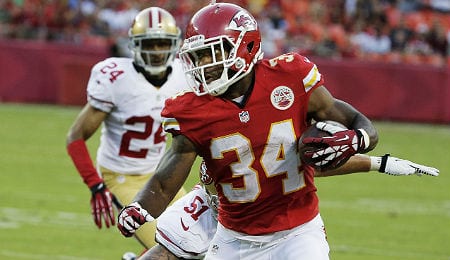 Knile Davis didn’t impress in Week Five, but hang on to him. (nflrush.com)

On this week’s episode of RotoRob Fantasy Football Weekly Podcast, heard every Wednesday at 1:30 p.m. EST on Blogtalkradio, Nick Wagner, Vaney Hariri and Josh Johnson were joined by Mike Krafick of Truluvsports.com.

Appearing on next week’s Podcast will be Brandon Marianne Lee of HerFantasyFootball.com.

By Josh Johnson
Tags: Mike Krafick
This entry was posted on Wednesday, October 8th, 2014 at 11:19 pm and is filed under FOOTBALL, Josh Johnson, Nick Wagner, Podcast, RotoRob Fantasy Football Weekly, Vaney Hariri. You can follow any responses to this entry through the RSS 2.0 feed. Both comments and pings are currently closed.