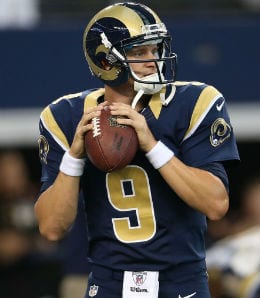 Austin Davis has been racking up yards for the Rams. (Thehorn.sportsblog.com)

Our infatuation with this year’s rookie class continues as this week’s Troll shines the spotlight on three more of them. We would like to remind you when the bye weeks burden your roster it’s okay to take a chance on rookie. They do lack consistency but our hope is that you will squeeze them at their peak. We now present for your convenience The Wire Troll for Week Six.

Austin Davis, St. Louis Rams: While it’s not quite a “we will rally around Kurt Warner” situation, Davis is racking up yards. Two straight 300-yard performances with six TDs (see video below) and just two INTs should inspire some confidence. After all, head coach Jeff Fisher named him the starter over the more seasoned Shaun Hill. Davis, the second-year QB from Southern Mississippi, has taken this franchise by the horns.

Storm Johnson, Jacksonville Jaguars: The Toby Gerhart experience has clearly not struck any meaningful chords, so the Jags might want to give Johnson the rock. Johnson’t stat line (four carries for 27 yards) from Sunday was not mind-boggling, but considering the rest of the team rushed for a meek 29 yards (14 from Blake Bortles and nine from Gerhart) Johnson is worth a stash. We are not saying knight him as your RB2 but if you own Gerhart, Doug Martin or any Panther RB, you own it to yourself to quietly claim Johnson.

Branden Oliver, San Diego Chargers: We all know that other rookie from the University of Buffalo in this division… now let’s meet Oliver. The undrafted back has now outperformed veteran Donald Brown for two straight weeks. PPR alert: Oliver snagged four balls for 68 yards and a TD on Sunday, and, oh by the way, he also rushed 19 times for 114 yards (that’s a six-yard average) and another score. Some of those stats were in garbage time against the Jets, but he also caught four passes two weeks ago vs. Jacksonville. With Danny Woodhead all but dead, Oliver (who wears number 43 — formerly worn by Darren Sproles) could have a very Sproles-like impact the rest of the way, even if or when Ryan Matthews returns.

Odell Beckham, New York Giants: Many draft pundits shuddered with adoration at the Combine in February while watching Beckham do his thing. We liked him enough that we even slated him at 51 in our preseason Wide Receiver Rankings. Now with the Giants improving and Victor Cruz on the other side of the field, Beckham should see many chances. Beckham stepped in during his first week active and exploited the Falcon defense for four steamy receptions, 44 yards and a TD. Cruz and surprise juggernaut TE Larry Donnell combined for three receptions and 22 yards (all by Cruz). Preston Parker, who we touched on during last week’s podcast led the team in receiving, but Beckham stole the show Fantasy-wise. Beckham is not a must-start but with byes in full swing he should a serviceable option.

Travis Benjamin, Cleveland Browns: Unless your league awards for return yards Benjamin is available. His two-TD performance in a comeback win on Sunday may have inspired the Browns to get him more involved. Benjamin, who also caught TD pass in Week One, has been a very effective return man for Cleveland. If a witch doctor took a toe nail from Darren Sproles and Antonio Brown, then throughly mixed it with a dreadlock from Cordarrelle Patterson, a mirror image of Benjamin would be born. This is not a Josh Cribbs-like scenario — Benjamin can ball.

Jace Amaro, New York Jets: While 14 receptions in five games isn’t amazing it should be noted that Amaro has eight of those in the last two games. Basically he and this Jets offense are getting comfortable with each other. As we strive to suggest the not so obvious, we can tell you that Amaro ranks inside the top 20 for receptions at TE. Other available TEs may have found the end zone, but that was then and now he’s moving towards that. With Eric Decker getting healthier, look for the rookie Amaro to be more open in the red zone.

By Josh Johnson
This entry was posted on Tuesday, October 7th, 2014 at 11:12 pm and is filed under FOOTBALL, Josh Johnson, The Wire Troll. You can follow any responses to this entry through the RSS 2.0 feed. You can leave a response, or trackback from your own site.