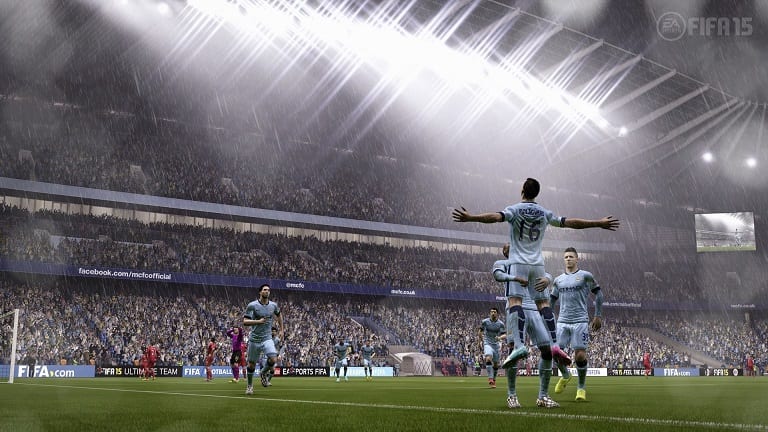 Given that we were born and (partially) raised in the Midwest, soccer wasn’t ingrained in us the way more traditional American sports were. While in one sense that’ll never change, we gained a new appreciation for the beautiful game during this year’s World Cup… for purely personal reasons. We and our wife brought our daughter home from the hospital just in time for the games to start, and with four matches a day we saw more soccer in the following month than in the rest of our lives combined.

Our own Mike Chen then graciously stepped aside after years reviewing the FIFA series to give us a crack at EA Sports’ global powerhouse. Now that we’re freshly armed with a developing cache of knowledge about players and strategies, let’s see how FIFA ’15 stacks up.

Reminiscent of the NBA 2k series, FIFA ’15’s controls exist on multiple layers, allowing players of all skill levels to enjoy the game. For newcomers and those that aren’t interested in mastery, the basics of doing things like shooting, passing and dribbling the ball are all straightforward and should become nearly second nature within a matter of a few games. On the lower difficulties that’s enough to compete consistently.

Move past that, however, and you enter another zone entirely. Trick shots, bicycle kicks, elaborate dribbling moves and more are available, provided you’ve got the skill to execute them. On that front, even going through all of the game’s skill challenges doesn’t adequately prepare you for most of these moves, which can be frustrating. With enough time and practice they may start to present themselves as viable flow-of-the-match options, but we didn’t get close after dozens of hours.

Even without the fancier maneuvers there’s still a lot to keep track of, especially given the perpetual nature of the action — for instance, remembering to hold down a button to alter the flight of a shot or when to queue up a quick pass before getting the ball. There’s a learning curve for new players, so expect a steady (but sometimes slow) progression if you haven’t been vetted by past iterations.

This is one of the more realistic looking sports games we’ve seen with tremendous attention to detail at every level — player faces, emotions, animations, weather effects, pitch degradation, net and flag physics and more. Uniforms move with ample realism as well, something that’s been an ongoing issue, even on next-gen consoles. The pre-match pageantry is excellent, particularly during big matches, and the in-game highlight reels are slickly done with commentary spliced in for goals.

One area that deserves special recognition is how well FIFA ’15 apes player behaviour on the pitch. If you watch soccer you know there’s a set of reactions unique to the sport (the finger wag when arguing with an official, the thumbs up for a good pass, etc.) and those are seemingly all present, which really helps make these games feel real.

Commentary is handled by Martin Tyler and Alan Smith, and the two of them do a good job of keeping things lively. All the soccer-specific verbiage is used throughout, and outside of a few repetitive phrases, the call of the game feels surprisingly fresh from one match to the next. Add a quality soundtrack and plenty of endearing soccer chants and FIFA ’15 delivers excellent presentation.

On the pitch, opponent and teammate A.I. can be inconsistent. At times it feels your teammates are doing all the right things, while at others it seems like they’re actively sabotaging your efforts. Goalies can vacillate between impenetrable and matador-esque, and it feels like there’s a little old-school Tecmo Bowl action at work with computer-controlled teams playing well above their skill ratings while doing things (i.e., running down faster players from behind) they shouldn’t be able to do.

Offline, FIFA ’15 is built around EA’s Ultimate Team and a pair of career offerings (one as a player, one as a manager). When creating a player you’ll select your league and team, and then you’re a safe bet to get transferred to a lesser league to hone your craft. It’s the typical rags to riches developmental journey as you’ll be presented with a set of objectives to meet with skills growing as you play.

It’s all pretty straightforward, with the notable exception of the in-game grading system. We’ve seen this method since the beginning of individual career modes, and it’s clearly one of the more difficult things to pull off. Unfortunately, FIFA’s version is among the more obtuse thanks to a completely under-the-hood approach. Instead of receiving feedback as to why your match rating is going up and down, it just does. Putting shots on goal often had no impact, while playing defense would send it plummeting — even though we followed the positioning cues.

As the manager you’ll be doing the usual stuff: negotiating contracts and transfers, hiring scouts to replenish the talent at the youth level, adjusting team lineups and tactics and so on. You can also take on new jobs or even oversee the National team.

Ultimate Team, a staple of pretty much every EA Sports title these days, feels even more front and centre here than in its other games. It follows all the usual trappings of the hybrid fantasy mode as you build up your squad to battle people around the world. One new feature allows you to add a highly rated player on loan, bolstering your team and getting a sneak peak at what your team might look like if you stick with it.

There’s a number of options available for online play based on your dedication level — not to mention how many friends you’ve got — with everything from one-on-one friendlies to 22-person tilts in which every player is human controlled. The performance was generally strong, though to be fair we never got in a game in which all 22 slots were filled.

With interest in the sport running high domestically on the heels of the World Cup, EA Sports has a highly accessible winner on its hands with FIFA ’15. If you’re a fan of the sport or someone looking to get more involved with it, this is a smart purchase.

By HC Green
This entry was posted on Saturday, October 4th, 2014 at 7:24 pm and is filed under Herija Green, Soccer, Video Game Reviews. You can follow any responses to this entry through the RSS 2.0 feed. You can leave a response, or trackback from your own site.