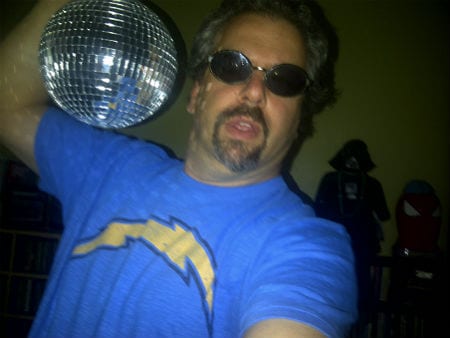 RotoRob threw a disco party to celebrate the Chargers and his NFL Style. Darth Vader and Spiderman were both seen on the dance floor.

Tuesday marked the inaugural National Football League Hall of Fashion event, created to celebrate this year’s fashion trends and the latest in NFL fan style. It was held at held at Pillars 37 in New York.

We have been asked to participate, posing for photos in various San Diego Chargers shirts — pics that were used to scare the bejesus out of the event guests, no doubt.

The gallery that was unveiled at the event featured the latest in both NFL Women’s and Men’s apparel. You can see more photos from the event here.

Among the celebs spotted Tuesday were actress/singer Jordin Sparks, who was sporting the jersey of her hometown Cardinals on the red carpet; supermodel Erin Heatherton (who opted not to dress in the sportswear, but did declare her love of the Bears on Twitter, inviting us to share her blanket in a very subtle manner); New York Jets QB Geno Smith (who, shockingly, flashed his Jets gear, yet no one sacked him and he didn’t throw a single interception — that we are aware of); NFL Women’s Apparel Creative Style Director Phillip Bloch (who wore an NFL T-shirt and matching hat, with jeans, running shoes and a suit jacket); and former Bills receiver Andre Reed (who sported an old school Bills T-shirt).

Guests learned about this season’s fashion trends and were schooled on how they can create their own unique look with NFL apparel — regardless of their shape or size.

This event and the celebrity support is part of the NFL Apparel program, created to commemorate the diversity of the Women’s and Men’s Apparel lines. The first 16 members of the new digital NFL Hall of Fashion were inducted — including RotoRob! Yes, we know… we are as befuddled as all of you as to how in the universe this chain of events may have transpired.

At any rate, think you have what it takes to be an NFL style guru? Well, anyone can nominate themselves for induction by posting their #NFLfanSTYLE on Instagram and tagging @NFLfanSTYLE.

And if you’re searching for duds to complete your look, try the NFL Shop.

By RotoRob
Tags: NFL Hall of Fashion
This entry was posted on Thursday, September 18th, 2014 at 2:49 pm and is filed under FOOTBALL, Product reviews, RotoRob. You can follow any responses to this entry through the RSS 2.0 feed. Both comments and pings are currently closed.