Create Your Own Football Fashion Look 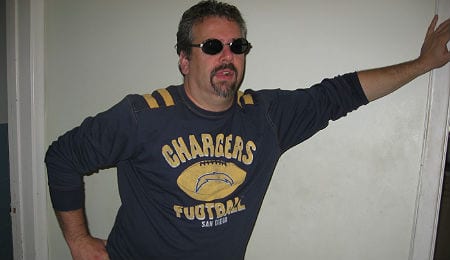 RotoRob is pretty stoked about his Chargers these days.

Last month, we wrote about the launch of the NFL Hall of Fashion, of which we were honoured to be one of the 16 initial inductees.

Today, we’d like to tell you a bit more about NFL Apparel and the “Together We Make Football” Women’s Campaign.

The NFL Women’s Apparel campaign is now is its fifth year and the whole idea behind the “Together We Make Football” campaign is that you can take gear from your favourite NFL team and incorporate it into your own fashion sensibility to create a customized look.

They’ve tried to get women from across the board — TV personalities, bloggers, musicians, actresses and NFL wives and/or sisters — to show the infinite ways in which you can express your fashion sense through NFL Apparel.

On the men’s side of things, NFL Men’s Apparel can really be worn by all dudes — regardless of your personal style. Even RotoRob can make a fashion statement, as implausible as that may seem.

The thing is, this isn’t just about putting on your favourite team’s jersey on Sundays. You can flash your team fandom daily (or, at least until that jersey starts to smell like you just played a game in it).

So go ahead and tweet about your #NFLfanSTYLE. Need gear to do so? Try the NFL Shop.

Right now, it’s a perfect time to be a Chargers fan, as we’re filled with more team pride than usual. At 5-2, San Diego is battling for the top spot in the AFC West, although its five-game winning streak was snapped in Week Seven. If the Chargers can beat Denver Thursday, we’ll be over the moon!

By RotoRob
Tags: NFL Hall of Fashion
Posted in FOOTBALL, RotoRob | Comments Off on Create Your Own Football Fashion Look

This event and the celebrity support is part of the NFL Apparel program, created to commemorate the diversity of the Women’s and Men’s Apparel lines. The first 16 members of the new digital NFL Hall of Fashion were inducted — including RotoRob! Yes, we know… we are as befuddled as all of you as to how in the universe this chain of events may have transpired.