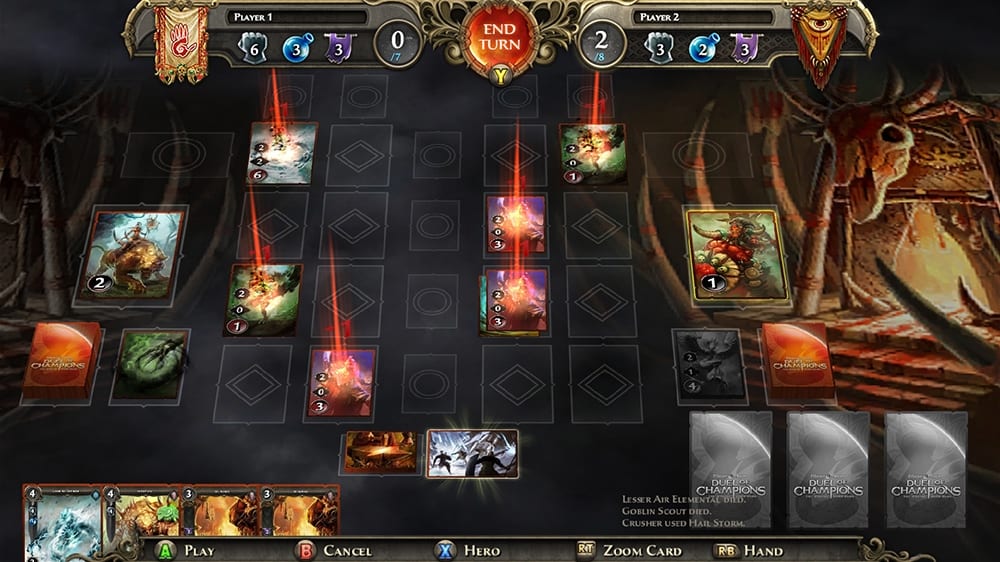 We love playing card games with friends, but if there’s one thing we despise, it’s learning how to play new card games. Thus, Ubisoft’s Might & Magic: Duel of Champions Forgotten Wars had us dreading the grueling process of absorbing another complicated rule set. Surprisingly, the game elegantly sidesteps many issues new players might encounter playing games like Magic the Gathering, and it’s even tons of fun and something we’re interested in seeing more of.

Unfortunately,  Forgotten Wars’ origins as a free-to-play game really stop it from reaching perfection. In fact, its transition to a paid title has been less than graceful, turning the entire thing into somewhat of a mess.

Since you’re only going to be messing about with placing cards and such, controls shouldn’t be much of a problem. And yet, things don’t work out quite as perfectly as you’d hope. There’s toggling between the cards in your hand and those on the field to quickly manage or play what you want, but doing things like moving cards around can sometimes be needlessly complicated due to the game not making it clear what’s being selected.

You can zoom in on cards to get a better look, but there’s no way to stop your opponents’ onslaught of plays during a game to check out cards you’ve never seen before, meaning you’ll have to dig through a graveyard or wait for it to hit you to know what it does. After a while Forgotten Wars starts to make sense, but it’ll definitely takes new players a bit to come to grips with its setup.

In presentation, Forgotten Wars is a mixed bag. When it comes to the user interface, Forgotten Wars hits it out of the park. Everything is smartly laid out and clearly visible, making it a perfect setup that lets new players come to grips with its systems. Really, the only thing to complain about is that text is often extremely hard to read, especially in menus. Speaking of menus, this is where the main problems stem from, as, compacted with the text problem, they tend to be extremely convoluted and hard to navigate cleanly.

Overall, Forgotten Wars suffers in its aesthetics, with not much to bring you into the world it’s trying to spin, as well as coming off as quite plain and generic when you get down to what’s actually there.

As with any card game, Forgotten Wars comes with its own set of rules and systems, thankfully starting with an immediate tutorial. Although somewhat short and hands off in its approach to actually teaching the game to new players, it introduces an interesting twist from what we’ve played in other card games like Magic the Gathering, and it was just enough of a change to really get us into the game.

Things players remember from Magic the Gathering are shaken up to great effect here. First and foremost, mana is gone as a card. Instead, you start the game off with one and every turn add another to your total bank of mana. Many may remember a few games in which being flooded or starved of mana cost them a game, and this change is pretty handy in avoiding that.

The mana change works hand in hand with battles revolving around leveling your hero, with each turn letting you add one stat to their Might, Magic, or Destiny level. Every card in your deck requires certain levels of each summon along with a mana cost, adding another layer of strategy to the game just by shaking up core concepts.

All this comes to a head when actually putting cards in play, as although it’s set up like most card games with each player having two rows of four to summon cards, positioning plays a more important role in Forgotten Wars. Monsters can only block those in front of them, and card roles like flying and shooters become even more important since some can even deny counterattacks from enemies.

There’s tons of strategy and depth here when taking all the different decks into account, something the tutorial doesn’t explain nearly enough, but the base card game provided is extremely enjoyable, which manages to shine through despite the game’s aggressive monetization.

Forgotten Wars barely waits until after the tutorial to start badgering you for more purchases, offering a single chance to purchase all the game’s content for a discount. Troubling, and easily avoided, but this is merely the tip of the iceberg. From here, you’re taken straight into the card store, or rather, a slot machine that you pay to spin for new cards, although winning a game nets you a free spin.

The slot machine is comprised of five slots, three of which are taken up by cards unattainable to you unless you purchase decks not included with the base game, meaning every spin will leave you with two cards to choose from.

The game starts you with enough gold to buy a few cards and get a deck going through the deck builder (assuming you don’t want to use one of the provided starter decks), but it quickly becomes agonizingly clear any sort of meaningful progress will require some serious grinding through single player, or coughing up more money for gold or deck packs.

Past the single player an online mode is offered, but sadly searches brought up no challengers.

Might & Magic: Duel of Champions Forgotten Wars is a fun game that we want to play more of, and it even includes an extremely meaty single-player campaign full of matches to sink your teeth into.

Unfortunately, its constant attempts at extracting more money from the player hamper deck building and any sort of meaningful progression. If you’re willing to dig, you’ll find a fun and rewarding card game here. Albeit one that’s sadly obscured with far too many attempts at micro transactions for its own good.

By Justin Redmon
This entry was posted on Tuesday, August 5th, 2014 at 3:46 am and is filed under Justin Redmon, Video Game Reviews. You can follow any responses to this entry through the RSS 2.0 feed. You can leave a response, or trackback from your own site.