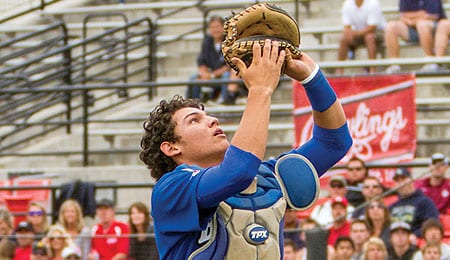 Alex Jackson is considered the top high school hitter in this draft. (Pomeradonews.com)

Our coverage of the 2014 MLB Draft rolls on with a look at one of the non-pitching gems of this year’s class, Alex Jackson, a catcher who can also play third base and the outfield. The 18-year-old California native (Rancho Bernardo High School) and University of Oregon commit is a legitimate Top five prospect that could go as high as No. 2.

Jackson brings with him a power bat, no matter what position he ultimately lands at. The sound the ball makes coming off his bat is a pure one that the scouts love (see video below). We’re more inclined to think that should he land in Miami, as he is projected to, he might get a shot as a catcher, at least initially (although J.T. Realmuto — enjoying a breakout year at Double-A — may have something to say about that). Jackson has a strong arm and limited third base experience, so down the road the 6’2”, 215-pounder could end up in the outfield. His quick bat speed and slight uppercut swing means 30-plus home run potential, and who isn’t excited about that?

The consensus is that if Jackson is moved to the outfield it will be to one of the corner spots, likely right field. He has an above-average arm and short, quick release, even if his range isn’t ideal. Interestingly, LookoutLanding noted that it could behoove a team to give Jackson an opportunity to catch because it might maximize his value, even if his skills are not elite level. (Perhaps Evan Gattis’ career trajectory will provide guidance to whoever drafts Jackson.) Scouts are a bit varied on his speed, with some giving him a little more credit for his baserunning ability while Baseball America says that Jackson is a “below-average runner but not a clogger” and needs improvement on his blocking and receiving skills behind the plate. But one thing everyone seems to be in agreeance upon is his power potential.

Don’t expect the Astros to shock the nation and take Jackson, but Miami is very much in play for slugger. The Marlins are deep with pitching in their farm system and have some financial flexibility, so the pick makes sense. Still, there are rumours that team owner Jeffrey Loria wants to take Cuban-American pitcher Carlos Rodon, so Jackson could also go anywhere from third to sixth, with the Mariners being a stretch to grab him with the sixth selection. Keith Law of ESPN’s first mock draft had Jackson going to the Marlins but now has Rodon at No. 2, while John Manuel of Baseball America still likes the Marlins to draft Jackson.

Prior to the recent news regarding Loria’s love of Rodon, it almost seemed too easy to pick Jackson to go No. 2. It could ultimately hinge on whether the Astros take Rodon, because if so, Jackson should end up with the Marlins. Otherwise, we expect him to soon be calling Chicago home. The only question is, will it be on the South side or the North side? Our gut feeling says Cubs at No. 4. Of course, that may also be the kielbasa talking.

Imagine if Jackson does reach the bigs as a catcher? Could he bring back memories of the Mike Piazza salad days? That may not happen, but even in a corner outfield spot, he figures to be a steady power bat with solid value nonetheless, and should be the first Rancho Bernardo draftee to make an impact in the majors since 2002 selection Cole Hamels.

Now it’s your turn. Let us know in the comments below where you think Jackson could wind up and what we can expect from him.

By Michael Seff
Tags: 2014 MLB Draft
This entry was posted on Saturday, May 31st, 2014 at 2:45 pm and is filed under BASEBALL, Draft report, Michael Seff, Player profile, Prospects. You can follow any responses to this entry through the RSS 2.0 feed. Both comments and pings are currently closed.