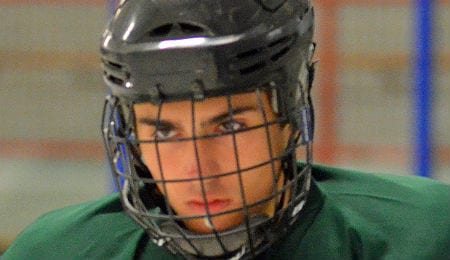 Here at RotoRob.com, we’ve been grading each National Hockey League team on how well they drafted at this past June’s Entry Draft. Today, we’ll discuss the Bloods and Crips toughest division in the entire league — the Central.

The Blackhawks never seem to have to make very many moves in the offseason to stay competitive. A good reason why is because of how well they draft. Even in a draft class that was considered weak this year, Chicago made good use of its nine picks, fortifying prospect depth with the selections of two centres, four wingers, two defensemen and a goaltender.

After trading up to the 20th overall pick from 27th, the Hawks tabbed centre Nick Schmaltz of the Green Bay Gamblers as the organization’s top pick, and the fourth of four United States Hockey League skaters taken in the first round of the 2014 draft. The younger brother of St. Louis Blues top prospect Jordan Schmaltz, Nick is a smart player with good instincts, speed and vision, and silky smooth mitts. A University of North Dakota incoming freshman this fall, the younger Schmaltz will be expected to contribute after two solid seasons in Green Bay. He was particularly impressive last season with 18 goals and 63 points in 55 regular season games. Just don’t expect Schmaltz to suddenly become a Bears’ fan (see video below).

Minus a second round pick, the Blackhawks got by with two picks in the third, selecting USHL right winger Matheson Iacopelli and South Shore High School forward Beau Starrett at 83rd and 88th overall, respectively. Already 20, Iacopelli dominated lesser junior leagues before putting up impressive numbers as a rookie with the Muskegon Lumberjacks last season. His 41 goals and 64 points in 58 games certainly made him an easy selection for the Hawks scouting staff late in the third. The 6’1″, 192-pound winger will play one more season in Muskegon before beginning his collegiate career with Western Michigan University.

Obviously, what attracted scouts to Starrett was his imposing 6’4″, 197-pound frame. Nearly a point-per-game player with 11 goals and 47 points in 48 games playing against his peers, the hulking left winger is bound for the USHL’s Dubuque Fighting Saints for a season before playing college puck for Cornell starting in 2015-16. How he does this coming season could be an indicator of whether or not there’s more to him than just size.

In the fourth round, Chicago added another left winger in the form of Chicago Steel Swedish forward Fredrik Olofsson. The younger brother of Minnesota Wild top defensive prospect Gustav Olofsson, Fredrik struggled with the USHL’s Gamblers early in the season. A mid-season trade to Chicago saw his production increase significantly. He finished the season with six goals and 15 assists in 52 games, including four goals and 11 assists for 15 points in 24 games with the Steel. He was significantly better on the international stage, scoring a goal and five points in six games for Sweden’s U-18 team this season.

The Blackhawks decided to go with two blueliners in the fifth round, snatching up Edina High School’s Luc Snuggerud and imposing 6’4″, 200-pound Swede Andreas Soderberg with the 141st and 148th overall picks, respectively. The club added another centre and a goaltender in the sixth round, selecting Ontario Junior Hockey League pivot Dylan Sikura and monstrous (6’4″, 214) Russian netminder Ivan Nalimov with back-to-back picks. Finally, Chicago wrapped up the weekend with the addition of Penticton right winger Jack Ramsey out of the British Colombia Hockey League at 208th overall.

In general, it was a solid draft in which the Hawks added a top centre prospect, additional depth on the wings and also welcomed a sizable goaltender to the fold. It’s unlikely to be a franchise-altering draft, but it’s worthy of a B at the least.

Last season, the Avalanche emerged as a team with a very, very bright future. However, the 2014 offseason has been mediocre at best, and may have actually set them further back once again. Most of the club’s top young prospects have already graduated to the big club, leaving a dearth of elite talent in the minors and prospect pool.

Like Chicago above, this is unlikely to be a franchise-altering draft for the Avs, however, they did manage to add a very solid centre prospect in No. 1 pick Conner Bleackley. Captain of the Western Hockey League’s Red Deer Rebels last season, the 6’0″, 192-pound pivot was nearly a point-per-game player with 68 points — including 29 goals — in 71 games. He’s not of the same caliber as current Colorado stars Nathan MacKinnon, Ryan O’Reilly and Gabriel Landeskog, but Bleackley could be an ideal third line centre as he is considered to be a strong two-way player with offensive upside.

Without a second round pick, Colorado added to its defensive depth in the third round with the selection of North Bay Battalion defenseman Kyle Wood. A sizable right-handed OHL defender, he helps shore up a position long considered a weakness by many outside of the Mile High City. With two fourth round picks, the Avalanche added a pair of Canadian major junior wingers, taking Kitchener Rangers right wing Nicholas Magyar and Gatineau Olympiques left wing Alexis Pepin.

Colorado added another defenseman in the fifth round, snatching up 6’0″, 191-pound Swede Anton Lindholm out of Skelleftea of the Swedish Elite League. More of a stay-at-home defender, Lindholm helps shore up defensive depth — a pressing need on the back end. The Avs took their first and only goaltender of the draft in 6’1″, 207-pound Slovak Maximilian Pajpach in the sixth round. After struggling in the Slovakian juniors, he’ll look for better results next season with Tappara U20 in Sweden’s Jr. A SM-Liiga. Finally, Colorado wrapped things up with the selection of Rouyn-Noranda forward Julien Nantel with the 204th overall pick.

The Avalanche certainly didn’t “wow” anyone with its picks, but the club did add a few nice prospects to the fold. Bleackley is a future NHLer, and Wood certainly intrigues, but the rest are a long way from the bright lights of the NHL. We’ll give Joe Sakic, Patrick Roy and Co. a solid C for this effort.

Recent moves by the Stars this offseason have made the club arguably the most dangerous team in the league’s toughest division. In addition to trading for Ottawa Senators captain Jason Spezza for essentially peanuts — and signing Spezza’s recent linemate Ales Hemsky — the Stars also addressed a major weakness (lack of potentially elite young offensive defensemen) with a stellar draft. With nine picks, Dallas snatched up seven blueliners, a goaltender and a forward — an impressive draft class headlined by premier Western Hockey League offensive blueline talent Julius Honka.

A small defender (5’10”, 181 pounds) hailing from a country known more for its dynamic forwards and elite goaltenders than defensive stalwarts, Honka blew down the doors of the WHL this season. As a rookie, the Finn scored at nearly a point-per-game pace with 16 goals and 40 assists for 56 points and a plus-10 rating in 62 regular season games with the Swift Current Broncos. He also represented his country at the 2014 U-20 World Junior Hockey Championships, notching an assist in seven games while helping his country win the tourney. Honka’s size isn’t ideal, but he’s quite quick, extremely elusive and transitions from offense to defense quite well for an offensive-minded player. Another season or two in the WHL will serve him well, but he’s not far from taking his talents to the NHL.

In the second round, the Stars took their first and only forward of the weekend, Edmonton Oil Kings left winger Brett Pollock, with the 45th overall pick. A big forward at 6’2″ and 182 pounds, Pollock scored a respectable 25 goals and 55 points in 71 regular season games in his sophomore campaign. However, he really impressed in the postseason, scoring 11 goals and 19 points in 20 games as the Oil Kings won the WHL championship and the CHL as Memorial Cup champs. The Stars may have taken just one forward, but they made sure it would count with the selection of this guy.

Speaking of other non-defenseman selections, Dallas used a second fourth round pick to take Niagara IceDogs goaltender Brent Moran at 115th overall. After struggling with a 3.85 goals against average and a .891 save percentage in 40 games last season, he’ll look to improve in his second season as an OHL starter.

When the Stars see an organizational weakness, it’s quite clear they certainly don’t mess around. Honka instantly steps in as the club’s top blueline prospect, Pollock is already one of the organization’s top offensive prospects and Moran adds to some solid goaltending depth. Finally, it’s pretty obvious no one will be complaining about the prospect pool’s defensive depth for a long time to come. If this doesn’t get at least an A, well, we don’t know what does.

Now it’s your turn. Let us know in the comments below how you think your favourite Central Division team did in the NHL Draft.

By Dakota Case
This entry was posted on Wednesday, July 30th, 2014 at 11:57 am and is filed under Dakota Case, Draft report, HOCKEY, Prospects. You can follow any responses to this entry through the RSS 2.0 feed. You can skip to the end and leave a response. Pinging is currently not allowed.