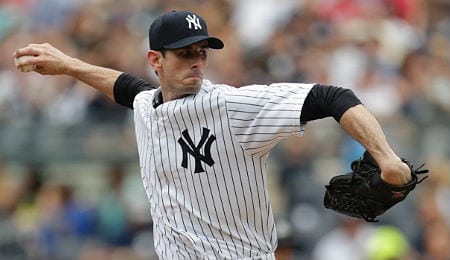 Brandon McCarthy should fare well against his ex-team on Tuesday. (AP Photo/Julio Cortez)

Today we’ll offer up some tips for play for on Tuesday, July 29 on Draftster.com, with a specific focus on the outfield.

Colorado outfielder Carlos Gonzalez ($3,200) comes super cheap on Tuesday in Wrigley Field against the Cubs and starter Edwin Jackson. There’s good reason for CarGo to be so discounted considering all the injuries this year have limited him to 10 homers in his worst season since he was a rookie with the A’s. He missed two games this weekend because of an ankle woe, came back Monday and looked very rusty (0-for-4 with two Ks), dropping his BA to a butt-ugly .152 mark over the last 20 games. So why in the hell would we recommend the struggling Gonzalez? Well, how about his career 7-for-9 mark with six RBI against Jackson? Climb aboard the CarGo express at such an inexpensive cost.

Milwaukee outfielder Carlos Gomez had been on a serious roll since the All-Star break but that came screeching to a halt this weekend as he endured a 1-for-12 skid. He’s on his way to a career high in runs, but with a salary of $9,700 against Tampa Bay’s Alex Cobb, we’re going to advise against investing in Gomez Tuesday.

We normally loathe recommending douchebags, but it’s hard to overlook what Los Angeles Dodgers OF Yasiel Puig ($8,600) accomplished this weekend in a three-game set San Francisco — not an easy place to hit. He went 5-for-14 with four runs, a double, three triples, two RBI and a walk. All three triples came Friday night as Puig tied the team mark. What we like about Puig — again, with the caveat that we hate to speak well of him — is that he’s making better contact this year. Go ahead and plug in Puig at home against Atlanta on Tuesday.

Need a starting pitcher for Tuesday? How about the Yankees’ Brandon McCarthy ($7,600)? All he’s done over three starts is go 2-0 with a 1.18 ERA, giving up just one homer in the process. He’s provided a nice boost to a rotation missing Masahiro Tanaka and Tuesday takes on his ex-mates in the Rangers, who have struggled to score runs lately. There’s no doubt McCarthy has been a tad fortunate to have such a low ERA in Pinstripes so far, but we still like his chances in Texas on Tuesday.

Quick Tip: The San Diego Padres-St. Louis Cardinals series figures to be fairly devoid of offense, so be sure to load up on hurlers from either team whenever possible this week.

Now it’s your turn. Let us know in the comments below who you’re eyeing in Daily Fantasy Baseball play today.

Crave more in-depth Fantasy analysis? Then join us every Thursday at 9 p.m. EST for RotoRob Fantasy Baseball Weekly Podcast on Blogtalkradio as we entertain and edify you for an hour or more each week. We were off last week thanks to the insanity of the real world, but will return this week, as RotoRob is joined by MLB Editor Michael Seff. Tune in here.

By RotoRob
This entry was posted on Tuesday, July 29th, 2014 at 2:05 pm and is filed under BASEBALL, Daily Fantasy Sports, Fantasy Leagues, RotoRob. You can follow any responses to this entry through the RSS 2.0 feed. You can skip to the end and leave a response. Pinging is currently not allowed.