The Wire Troll: Emilio Bonifacio Second to None 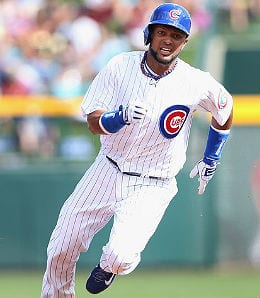 Emilio Bonifacio is running wild for the Cubs. (Baseblog94.com)

We are more than a week into baseball’s second half, and this is the time for the real contenders to stand up. It is also a time for floundering teams to see what they have for the future. So for those players like Danny Santana, that time is now. For you Fantasy owners, well, that time may also be now. Don’t sleep on Santana or Emilio Bonifacio. Let’s look at this week’s solid waiver wire options:

Emilio Bonifacio, OF/2B, Chicago Cubs (ESPN: 13 per cent owned, CBS: 42 per cent): Obviously he cooled after that crazy good start to the season, but EB Games (okay, we’ll work on the nickname) can slide into either middle infield spot or center, and he’s 8-for-20 (.400) in his last five games since coming off the DL (looking none the worse for wear with a leadoff double in his first at-bat back — see video below). In NL-only leagues, versatility should count for something, and Bonifacio’s respectable .272 average and 14 stolen bases aren’t too shabby for a guy who missed over a month with an oblique injury. The Cubs finally parted ways with beleaguered middle infielder Darwin Barney, so Bonifacio could see time when the Cubs decide to give Arismendy Alcantara, whom we recently featured in this column, a blow.

Danny Santana, CF, Minnesota Twins (ESPN: 26 per cent owned, CBS: 34 per cent): Oh Danny Boy, the Fantasy owners should be calling. From Glen (Perkins to you, what else is there to really celebrate in Minnesota these days? Since returning from injury post-All-Star break, Santana is 8-for-31 (.258) with a homer, hitting safely in six of eight games.

Dustin Ackley, LF, Seattle Mariners (ESPN: 12 per cent owned, CBS: 27 per cent): Brush those trade rumours aside, Mr. Ackley, we don’t think you’ll be going anywhere. You may, however, find some new Fantasy owners after your torrid July, which includes a .358 average, 814 OPS, and five RBIs. No, Ackley’s season numbers don’t wow you, but the former No. 2 overall draft pick seems to be finding his stroke as of late.

Joe Kelly, SP, St. Louis Cardinals (ESPN: 11 per cent owned, CBS: 43 per cent): We discussed Kelly on our July 10 Podcast, and now it’s time to bring him up again. He had a rough start on Friday in Chicago, allowing his first two home runs of the season, but make no mistake, this guy is a worthy starter on your Fantasy team if you need a quick fix. Kelly’s July has been rocky after returning from a hamstring injury, but we think he is more the pitcher that shut down the Dodgers on July 19 to the tune of one run over seven innings than the guy that was lit up in Milwaukee and Chicago in his other two post-DL starts.

Drew Smyly, SP, Detroit Tigers (ESPN: 45 per cent owned, CBS: 48 per cent): Keep smiling, Tigers fans, because Detroit’s rotation has yet another guy who has become more reliable than Justin Verlander in 2014. Ignore Smyly’s overall numbers to some degree (6-9, 3.77 ERA) and relish his last two starts in which he’s been filthy, allowing a mere three earned runs over 12 2/3 IP while striking out 17. He was also phenomenal in June, posting a 2.63 ERA over five starts.

Josh Collmenter, SP, Arizona Diamondbacks (ESPN: 6 per cent, CBS: 32 per cent): Before Saturday’s shellacking at the hands of the Phillies, Collmenter had been outstanding of late, allowing just one run in three of his previous four starts, including a pair of seven inning outings. He doesn’t rack up many Ks (just 73 in 114 IP) but is 8-5 with a 4.03 ERA for the season. It’s hard to believe Collmenter is so underowned in Fantasy land.

Dioner Navarro, C, Toronto Blue Jays (ESPN: 6 per cent owned, CBS: 39 per cent): Navarro is 21-for-73 (.288) with two homers, seven RBI, and a 722 OPS in July. The switch-hitting backstop also has four multi-hit efforts in his last six games including Tuesday, when RotoRob had to witness the pudgy catcher help to make mincemeat of his beloved BoSox.

Crave more in-depth Fantasy analysis? Then join us every Thursday at 9 p.m. EST for RotoRob Fantasy Baseball Weekly Podcast on Blogtalkradio as we entertain and edify you for an hour or more each week. We were off last week thanks to the insanity of the real world, but will return this week, as RotoRob is joined by MLB Editor Michael Seff. Tune in here.

By Michael Seff
This entry was posted on Sunday, July 27th, 2014 at 11:18 am and is filed under BASEBALL, Michael Seff, The Wire Troll. You can follow any responses to this entry through the RSS 2.0 feed. You can skip to the end and leave a response. Pinging is currently not allowed.