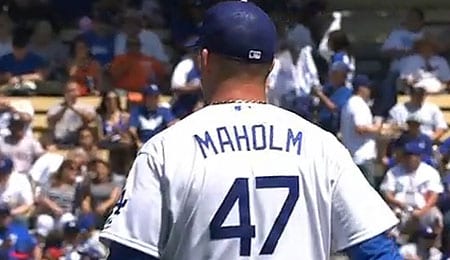 In a Podcast in April 2013, we marvelled at the model of consistency that Paul Maholm was.

Well, after a superb start last season, things didn’t go so well for the veteran southpaw as his ERA rose almost three-quarters of a run year-over-year and he wound up getting hurt a couple of times and missing a few weeks.

Maholm’s already modest strikeout rate regressed after a career-best performance in 2012 and his win total dipped (although he did manage to reach double digits for just the third time in his career).

When the Dodgers signed him this winter, it caused many an eyebrow to raise given how cheaply he came. There didn’t seem to be a place for Maholm in the LA rotation, but you know what they say about never having enough pitching.

Sure enough, early season injuries opened the door for Maholm to start. First it was Clayton Kershaw, and then Maholm received a stay of execution when Hyun-Jin Ryu got hurt. Once Ryu returned just over a week ago, however, it was back to the bullpen for Maholm.

It’s been a rough start to the season for Maholm. He’s been giving up more runs and has really never looked worse. Perhaps a bullpen stint is just what he needs at this point — especially considering how bad his last start was (11 hits and 10 runs allowed in 3 2/3 IP against the Marlins two weeks ago).

Since moving back to the pen, Maholm has tossed two shutout outings, giving up just one hit in 2 2/3 IP with three Ks.

It’s the same old, same old for Maholm. He gets a crack at starting, looks pretty good for a while, and then begins to smell like turned cottage cheese. Okay, we’ll give him this: he’s tough (see video below).

Still, if nothing else, he managed to become part of Dodger history this week, combining with Josh Beckett and Ryu to hold opponents hitless for 52 straight at-bats.

Here’s another thing Maholm should be proud of: with 967 career strikeouts, he is the active leader among Mississippi-born hurlers. Hey, we can’t make shit like this up!

The soft-tosser has thrown curveballs that have barely topped 60 mph this season, and while it’s nice to see him settle down as a reliever, any possibility that Maholm could offer Fantasy value disappears with his rotation spot. If for some reason, you’ve been hanging onto him in a deep NL-only league, just let go.

Now it’s your turn. Let us know in the comments below what you think the future holds for Paul Maholm.

By RotoRob
This entry was posted on Wednesday, May 28th, 2014 at 2:04 pm and is filed under BASEBALL, Player profile, RotoRob. You can follow any responses to this entry through the RSS 2.0 feed. You can leave a response, or trackback from your own site.