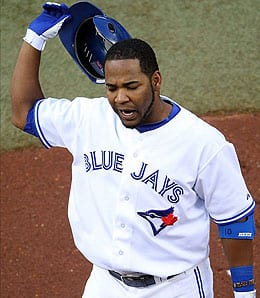 Team One: The Good Eyes Team

The Good Eyes have underachieved so far. Coming into this season, Edwin Encarnacion was a hot RotoDerby pick because he only struck out 62 times in 621 plate appearances and he hit 36 homers last season. In the first month of 2014 he had two homers and 25 strikeouts. With the Jays struggling, Double-E could find himself on the trade market later this season and a move anywhere will hurt his homer numbers given that he already plays in the major’s top dinger ballpark (so far this season, anyway). But hey, at least he’s flashing some rare defensive skills (see video below).

Adrian Beltre has been another source of severe disappointment. His 30 homers and 78 strikeouts in 690 plate appearances last season had many drooling over the 35-year-old. Thanks to a stint on the 15-day DL, Beltre had a whopping zero homers in the first month of the season.

The Good Eyes are currently led by Jose Bautista’s eight homers and Buster Posey’s six. The team finished the month ranked in 276th place, or about the middle of the pack.

Hanley Ramirez: Seven points; his AB/RBI ratio for the first month was 9.4, last season it 5.3.
Edwin Encarnacion: Zero points; Encarnacion’s slugging of .430 is down significantly from his career mark of .477.
Ian Kinsler: Fifteen points; Kinsler only struck out nine times in the first month, but two homers was certainly a letdown.
Buster Posey: Twenty eight points; Posey’s K/AB rate is up slightly, but his six-homer month tied for the second best output in a month in his career.
Pablo Sandoval: Minus six points; April was not a good a month for the Kung Fu Panda — 22 strikeouts, two homers and just six RBI.
Adrian Beltre: Minus two points; Beltre only whiffed seven times, but his mere five RBI could not keep him out the negative.
Coco Crisp: Twelve points; April wasn’t a great month for Crisp, but considering how poorly some players did relative to their expectations, we will take a dozen.
Jose Bautista: Thirty seven points; Bautista had 18 RBI and 21 strikeouts in month number one. But it was his eight round-trippers that jolted him into a high end RotoDerby performer.

Matt Holiday: Eleven points; Holiday’s AB/HR ratio for the first month was 58.5 compared to his career mark of 21.8.
Bryce Harper: Minus seven points; Harper will be on the DL for another two months. His one homer in 91 plate appearances is a major disappointment.

Crave more in-depth Fantasy analysis? Then join us every Thursday at 9 p.m. EST for RotoRob Fantasy Baseball Weekly Podcast on Blogtalkradio as we entertain and edify you for an hour or more each week. This week only, we move to Wednesday at 1:30 p.m. so the football peeps can take our Thursday night slot and cover the NFL Draft live. On Wednesday, Josh Johnson will host the Baseball Podcast with guest Chris Tubbs of KWSN.com. Tune in here.

By Josh Johnson
This entry was posted on Tuesday, May 6th, 2014 at 9:33 pm and is filed under BASEBALL, Fantasy Leagues, Josh Johnson. You can follow any responses to this entry through the RSS 2.0 feed. You can leave a response, or trackback from your own site.