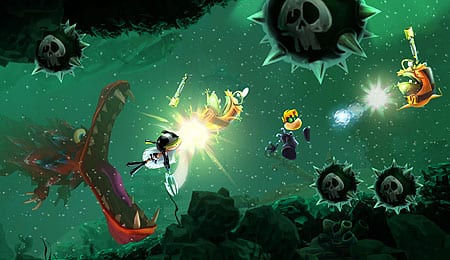 That’s not the Sam Fisher that Tom Clancy had in mind.

For the second time in less than a month, we found ourselves replaying one of our favourite games from 2013 on a next-gen console. First, it was Tomb Raider: Definitive Edition, which checked in at No. 5 on our top 10 list for last year, and now it’s Ubisoft’s Rayman Legends — our No. 7 title and choice for best game on a Nintendo console.

There are some differences between the two endeavors, but perhaps the biggest is that the next-gen version of Legends checks in at US$39.99. That could be an enticing carrot for those that haven’t played the game, though the absence of the US$9.99 upgrade (as seen with Ubisoft’s Assassin’s Creed IV: Black Flag) could frustrate those that already purchased it on the PS3 or Xbox 360.

In terms of added content, there isn’t a lot. The Xbox One version gets the better end of the deal with the new stuff, getting 10 additional challenges for nabbing achievements. On the PlayStation 4, however, you get a couple of touchpad gimmicks: during levels you can use it to pause the action and then operate as a camera, zooming in and out to snap and share pictures, and in between it’s used to scratch your lottery tickets. A handful of console-specific playable characters have also been added, but that’s the extent of the new content.

Visually, Rayman Legends’ hand-drawn artistic style has never looked better. The power of next gen makes all the colourful characters and backgrounds pop more vibrantly than ever, and the load times have basically evaporated. Of course, given how excellent the game already looked on the various consoles this doesn’t qualify as a huge draw.

Also, when we originally reviewed the game we took a look at the Wii U and Vita versions, and it’s worth noting that neither the PS4 nor Xbox One versions are quite as engaging to play when it comes to the Murfy levels. Employing the Wii U’s gamepad, which allowed for co-operative action, or swiping on the Vita simply made more sense when controlling Rayman’s buddy as opposed to him simply hovering over an object and waiting for you to hit a face button. It’s still eminently functional, and the levels are still well thought out, it’s just not as intuitive.

Without question, Rayman Legends is our favourite platformer on the market today. It looks and sounds fantastic, is brilliantly designed, offers an absolute ton of content and is more diverse with its offerings that one might think. As a standalone product for someone that doesn’t already own the game, this is an absolute steal. Given how minimal the differences are between this and last gen, however, anyone that has already taken the plunge likely doesn’t need to do it again.

By Herija Green
This entry was posted on Tuesday, March 4th, 2014 at 12:16 pm and is filed under Herija Green, Video Game Reviews. You can follow any responses to this entry through the RSS 2.0 feed. You can skip to the end and leave a response. Pinging is currently not allowed.