The Wire Troll: Nick Calathes is a Hidden Gem 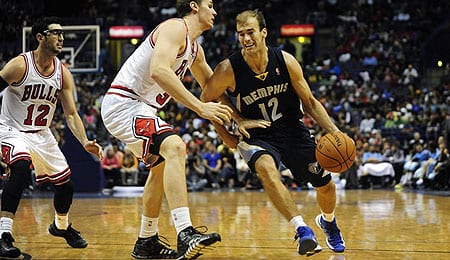 Over the past few seasons, the Memphis Grizzlies have shown a tendency to tread water during the first quarter of the season before turning on the jets and assuming the role of playoff contender. When Marc Gasol and most recently Mike Conley went down with injuries, the season outlook appeared bleak. Enter Kousta Koufos (for Gasol) and Nick Calathes (for Conley) to save the day and the Grizzlies are 29-23 at the All-Star break, battling Dallas, Phoenix and Golden State for final three playoff spots.

Let’s get to this week’s Fantasy basketball waiver wire picks.

Nick Calathes, PG, Memphis Grizzlies: A former member of the Greek National Team and University of Florida standout, Calathes was acquired from the Dallas Mavericks for a second round pick last July. Mavs owner Mark Cuban may regret the day that Calathes escaped the “Shark Tank” as the rookie has been terrific during Conley’s recent absence. In seven starts, Calathes has averaged 14.7 points, five assists and 2.6 steals while shooting an impressive 52 per cent (44-for-85). He first popped up on the Fantasy radar late last month against the Rockets (see video below), but has really taken off since Conley went down.

Nate Wolters, PG/SG, Milwaukee Bucks: The Bucks have been decimated by injuries all season, so rookie Wolters is getting a serious look. Drafted in the second round, he has been a pleasant surprise for Milwaukee, posting recent games of 19 and 14 points with a sprinkling of assists and steals to boot. If O.J. Mayo and Luke Ridnour continue to miss games, young Wolters may stick with the starting unit.

C.J. McCollum, PG/SG, Portland Trail Blazers: If you’re in keeper league, this is an urgent alert to get McCollum on your team. He was the star of the NBA Summer League in Las Vegas after being the 10th overall pick by Portand last year. Unfortunately for McCollum, he suffered a broken foot and missed the first 36 games of his career. Now that he’s finding his legs and the nuances of the NBA, he’s putting up decent Fantasy numbers as of late. Playing time will likely hinder McCollum from being a major factor the remainder of the way but watch out in future seasons.

Kirk Hinrich, Chicago Bulls, PG/SG: Back in November, we recommended Captain Kirk in the wake of Derrick Rose’s injury, and it was a decent call, although he missed some time in December and January. Two weeks ago, Hinrich took over from D.J. Augustin as the starting PG for the Bulls, and the team has won four of six since then as he’s supplied some scoring, some assists, plenty of steals and some treys. Hinrich is no longer a star, but is getting more touches this season and is worth a look if you need some help at guard.

Chase Budinger, SF, Minnesota Timberwolves: Budinger has been the victim of knee problems the past two seasons and has never fulfilled his promise. The former University of Arizona star can shoot the rock and has become Fantasy relevant again thanks to Kevin Martin’s broken finger. If you need treys and points over the next few weeks, Budinger is your man.

Anthony Bennett, SF/PF, Cleveland Cavaliers: Caution! Please don’t run to your computer or mobile device to add Bennett as quickly as possible. This is simply ample notice that the first overall pick from last year’s draft is showing signs of life recently. Considered a total Fantasy bust to this point in the season, Bennett recorded a 19-point, 10-rebound performance on Tuesday against Sacramento and bears watching because of his potential and the fact that things are being shaken up in Cleveland, which could affect his PT in a positive manner.

Marvin Williams, SF, Utah Jazz: Williams is another player we recommended a couple of months ago and one that is certainly known for his streakiness. He has been on a recent tear, providing scoring, treys and rebounds for the struggling Jazz. If you are looking for consistency, Williams is not your guy. However, he’s guaranteed a starting spot and ample hardcourt time moving forward.

Zaza Pachulia, Milwaukee Bucks: With recent news that Larry Sanders will be out a minimum of six weeks with an orbital (eye) fracture, Pachulia will share the centre job with John Henson. Both players should also see time at power forward as well. Pachulia can be a valuable addition for his scoring, rebounds and assists, but don’t count on him swatting away many shots.

Amare Stoudamire, C/PF, New York Knicks: The $100 million man has been able to stay healthy recently and the results have been encouraging. Over his last four contests, Stoudemire is averaging 17 points (on 58 per cent shooting) and seven boards with Coach Mike Woodson affording him extra playing time.

Kelly Olynyk, Boston Celtics: With back-to-back double-doubles to end the first half, Olynyk is a player to watch following the All-Star break. With Brandon Bass and Kris Humphries rumoured to be on the trading block (February 20 is the trade deadline), Olynyk could see plenty of court time in the final stages of the season with the Celtics hoping he can become a cornerstone for the future.

Now it’s your turn. Let us know your favourite Fantasy basketball waiver wire pick of the week in the comments below.

By Bob Raymond
Tags: Memphis Grizzlies
This entry was posted on Saturday, February 15th, 2014 at 4:23 pm and is filed under BASKETBALL, Bob Raymond, The Wire Troll. You can follow any responses to this entry through the RSS 2.0 feed. You can skip to the end and leave a response. Pinging is currently not allowed.