The Wire Troll: Tony Wroten Getting Burn in Philly 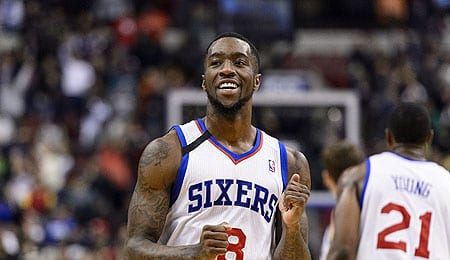 Rejoice those of you that own Clippers star guard Chris Paul as he is expected to return to the lineup on Sunday. This will severely affect the Fantasy value of Darren Collison, yet Jamal Crawford remains valuable thanks to his offensive firepower. While Paul has been sidelined, Crawford has truly emerged, keeping the Clippers in contention for a homecourt playoff series in Round One.

Steve Nash, PG, Los Angeles Lakers: Nash is back for yet another stint as the Lakers starting point guard. The question remains whether he’ll be able to overcome numerous nagging injuries and remain in the lineup. As evidenced Friday — on his 40th birthday no less — the ability and skills are still there (check out the video below to see him school Evan Turner) as Nash registered 19 points and five assists against Philadelphia. Tread carefully, but Nash can certainly help Fantasy teams in need of point guard help. Besides, when’s the last time this dude was available on the wire?

Tony Wroten, SG, Philadelphia 76ers: The Sixers acquired Wroten from Memphis in the offseason and he’s proven to be a valuable player. He has displayed excellent offensive firepower off the bench, averaging almost 13 points and over three assists. Recently, Wroten has been seeing over 25 minutes per game and is definitely worth rostering.

Courtney Lee, SG, Memphis Grizzlies: Speaking of valuable acquisitions, where would the Grizzlies be without Lee? He was sent from the Celtics to Memphis in early January and has sparked his new team back into playoff contention. Lee’s success has coincided with a hand injury suffered by Tony Allen, but it’s difficult to envision Lee losing the starting job when Allen returns. In his most recent outing, Lee registered 22 points, five rebounds and four assists and is shooting over 50 per cent from the field since joining trading in his leprechaun for a bear.

Shaun Livingston, PG, Brooklyn Nets: If you watch Livingston, it’s easy to see why he was such a heralded player entering the NBA back in 2004. Sadly, he fell victim to a gruesome knee injury in 2007 and has been relegated to a reserve role ever since. Livingston is valuable to the Nets with Deron Williams seemingly unable to stay healthy and Coach Jason Kidd opting to play them together at times in the backcourt. From a Fantasy perspective, Livingston can help teams in need of assists and steals (seven steals and eight dimes vs. Philadelphia on Monday), although that block party he threw against San Antonio Thursday was an anomaly. .

Khris Middleton, SF, Milwaukee Bucks: We told you to get on the Middleton train in December, and we hope you listene because he’s produced when provided ample playing time. Larry Drew is the mad scientist of NBA coaches, changing starting lineups seemingly whenever possible. However, Drew is discovering that the Bucks produce best when Middleton is the starting small forward. That has been the case over the previous seven games with Middleton averaging 17 points, five rebounds and three assists while nailing 10 treys in his last two outings. The trade of Brandon Jennings for Brandon Knight and Middleton is proving to be a nice take for the rebuilding Bucks. Now if they could only start winning a few games.

Brandon Bass, PF, Boston Celtics: Bass is certainly not known for statistical “consistency,” but he’s worth considering now that he has regained a spot in the Celtics starting unit. Two of his last three games have been solid, so Fantasy teams in need of points, rebounds and some blocks should take notice.

Kyle Singler, SF/SG, Detroit Pistons: With the Pistons being one of the most underachieving teams in the NBA so far, Coach Maurice Cheeks opted to insert Singler into the shooting guard spot in place of struggling rookie Kentavious Caldwell-Pope. The change certainly worked its magic on Friday as Singler scored 16 points with five boards, three steals and two blocks.

Shawn Marion, SF, Dallas Mavericks: Every now and then we like to recommend a player who has fallen below the 50 per cent ownership mark because of injury. Such is the case with Marion, who certainly contributes in several offensive and defensive categories when healthy. Now back in the Mavs starting five following a shoulder malady, he can help those in deep Fantasy leagues and should be on the radar in standard formats.

Omer Asik, C, Houston Rockets: Asik is expected to return to active duty on Saturday after missing 31 games with knee and thigh injuries. It remains to be seen how much playing time he will receive, but watch him closely. Asik is a prime trade candidate with the deadline approaching in less than two weeks. Don’t forget last season when he was a double-double performer as the Rockets starting centre. If Asik winds up in a situation where he sees 25-to-30 MPG, he’ll be extremely valuable.

Jordan Hill C/PF, Los Angeles Lakers: Hill is back on the Fantasy radar thanks to injuries suffered by Pau Gasol and several other Lakers. Hill can score, rebound and block shots, but can’t be counted on for the long-term given his current situation.

Elton Brand, C/PF, Atlanta Hawks: This week’s “under the radar” Hawk, following the likes of Mike Scott and DeMarre Carroll, is none other than the veteran Brand. Over his last four games, Brand has quietly averaged 10.5 points, seven rebounds and two blocks. He should remain valuable as long as Pero Antic (ankle) is sidelined.

By Bob Raymond
Tags: Los Angeles Clippers
This entry was posted on Saturday, February 8th, 2014 at 2:34 pm and is filed under BASKETBALL, Bob Raymond, The Wire Troll. You can follow any responses to this entry through the RSS 2.0 feed. Both comments and pings are currently closed.