Red Sox Open Their Hall of Fame to the Rocket 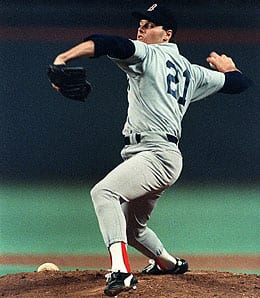 Roger Clemens is welcome into the HoF… Boston’s Hall, at any rate. (Fenwaypark100.org)

The Boston Red Sox bucked the trend set by the BBWAA of shutting out suspected performance-enhancing drug users from the Hall of Fame when they announced Wednesday that Roger Clemens will join Nomar Garciaparra, Pedro Martinez and Joe Castiglione as 2014 inductees into the team’s Hall of Fame.

We think it’s great that the BoSox are honouring the Rocket despite the fact that he continues to be shunned virtually everywhere else thanks to all the PED allegations.

After all, all he did in 13 seasons with Boston was make five All-Star teams, win three Cy Young awards, win the 1986 AL MVP and set all-time team records in wins (tied for lead), shutouts and strikeouts.

Boston erroneously thought Clemens was done after 1996, letting him walk as a free agent. Clearly, he was far from finished, winning another four Cy Young awards in 11 years before calling it a day.

Martinez only spent seven seasons with the BoSox, but earned two Cy Youngs and made four All-Star teams during his electrifying tenure, much of which was spent as the unquestioned best pitcher in baseball. For a five-year stretch, he went 82-21 with a 2.10 ERA, a run which can be put up against virtually anyone’s best half decade.

Garciaparra, of course, became an instant sensation in Beantown, winning the AL ROY in 1997 when the shortstop bashed 30 homers and flirted with 100 RBI. Over his nine seasons with Boston, Nomar was a five-time All-Star and was the AL MVP runner-up in 1998. His lifetime BA of .323 ranks fourth in Red Sox history.

Castriglione has done radio play-by-play for the team for over 30 years.

The induction ceremony will occur sometime in August.

Now, while we’re on the topic of being elected into various Hall of Fames, we were remiss in failing to mention that former big league pitcher Chris Reitsma, who last pitched in the bigs in 2007 with Seattle (when he was still a Fantasy worthy name to consider), was elected into the Alberta Sports Hall of Fame in August (see induction video below).

Did you know that he was the first Canadian to ever be selected in the first round of the MLB draft? Boston took him with a supplemental pick, 34th overall, in 1996 and he wound up spending seven seasons in the bigs with Cincy and Atlanta before the Mariners.

In 2008, he was a member of the Canadian National Team at the Beijing Olympics.

Reitsma’s best season was probably 2002, when he was a swingman for the Reds, making 21 starts and 11 relief appearances. He enjoyed his best hit rates that season, and although his walk rate was up, he enjoyed his finest ERA ever at 3.64. He also had his only career shutout that season.

Now it’s your. Let us know in the comments below whether you agree or disagree with Boston allowing Clemens into its HoF.

By RotoRob
This entry was posted on Wednesday, February 5th, 2014 at 3:18 pm and is filed under BASEBALL, Hall of Fame. You can follow any responses to this entry through the RSS 2.0 feed. You can skip to the end and leave a response. Pinging is currently not allowed.