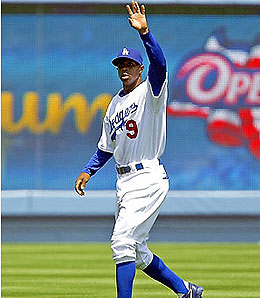 I traded Juan Pierre for Brian Roberts. I wanted to keep Pierre for his speed but wanted a quality 2B while Figgins is out and I didn’t want to give up a lot of power to get one. I gave up some speed, but Roberts had 36 steals last season and Figgins and Hanley Ramirez also both had 50+ last season so they should provide me with adequate speed when Figgins comes back.

I offered someone Nick Markakis for Mike Piazza but he rejected it. Who should I try to target? I don’t want to drop him or anyone else on my team for a Seth McClung or Dan Wheeler, do you think that would be wise? Is there anyone on my team I should drop for him? I am holding onto Roger Clemens in case he plays. Do you think he will, or do you think I’m wasting a roster spot by holding onto him?

So, now my team is as follows (let me know if there is any other advice you have; thanks so much):

Smart trade with Roberts. I think he is No. 3 among 2B this year. I fully expect a comeback season from him.

As for Piazza, I don’t like him as much anymore. After Joe Mauer, Brian McCann and Victor Martinez, catchers really drop off. I think Russell Martin is going to be pretty good and maybe David Ross as well. But, they are all kind of lumped into “the rest,” so don’t give up Markakis unless you get something good for him.

Now, for the others. I won’t take him Clemens, even if he does play, what does he get you? Seven wins? No, thanks. I’ll take a sleeper and hope he pans out before I waste a roster spot on a guy that is doing nothing for half the season. I’m not saying drop him, but I would shop him around and see what someone who sees his name and not his stats will give me.

As for Wheeler/McClung, I don’t see anything I would drop for them unless I see them getting it done. Then, I might pick them up. But, you have to watch the news very closely for that.

Like a idiot I drafted Juan Rivera not knowing the seriousness of his injury. I will drop him for one of these players: Gary Matthews, Jr., Willy Taveras, Hank Blalock, Matt Murton, Jacque Jones or Brandon Inge. Who is my best choice to begin the season with?

I guess it depends on what position you need the most. I hate Blalock because the guys messes me over every single season and I am done with him. Matthews is going to be a flop I think, but I might keep an eye on him anyway. Taveras is going to be a SB machine, but won’t help in many other areas. Inge and Jones are waiver wire guys. As for Murton, I hope he has a monster season as I have him in my keeper league, but he is iffy at best.

I’d get Willy T if you need SBs, Matthews if you just want a decent OF and Blalock if you like to roll the dice. Knowing my luck, this is the season he figures it out and gets back to that All-Star form we once saw.

I need your advice early in the season. I have Miguel Cabrera and’David Wright at 3B, Carlos Delgado at 1B and Jason Giambi, Troy Glaus and Richie Sexson at DH. My outfield has Alfonso Soriano, but then my next best outfielder is Pat Burrell, with Brian Giles, Nick Markakis and Eric Byrnes rounding it out. Someone in my league offered me Johnny Damon for Cabrera. What do you think?

You were offered Damon for Cabrera and then Hideki Matsui. I told you before if you deal a top two third baseman for anything less than a top five to seven OF, you would be foolish. And, I haven’t changed my mind. I’d let Cabrera rot on my bench before I give him up for an OF closer to the 25 to 30 range.

If you offer Cabrera up in a league wide e-mail, I bet someone ponies up and pays you what he is worth. If not, let them suffer with their sub par 3Bs while you have a good back-up plan for those off days and any possible injury to Wright.

I have an open roster spot and I’ve narrowed my pick to three players. David Riske from KC (Octavio Dotel is a little banged up), Chris Reitsma from Seattle (J.J. Putz has barely pitched this spring) and Todd Coffey from Cincy (job wide open). Which one of the three do you think I should choose? I’m leaning towards Reitsma. What do you think?

David Weathers and Mike Stanton are first in line for saves in Cincy. Riske will continue filling in as closer until Dotel gets back in action. Reitsma is hampered by Putz who is now back in action. Of the three, Riske is the best bet right now. I’d keep an eye on the situation in Houston. Brad Lidge is already going Lidge this season and it is a matter of time before he losses the job. (Too late, he just did!)

By James Morris
This entry was posted on Wednesday, April 11th, 2007 at 5:23 pm and is filed under BASEBALL, Dear RotoRob, James Morris. You can follow any responses to this entry through the RSS 2.0 feed. You can skip to the end and leave a response. Pinging is currently not allowed.