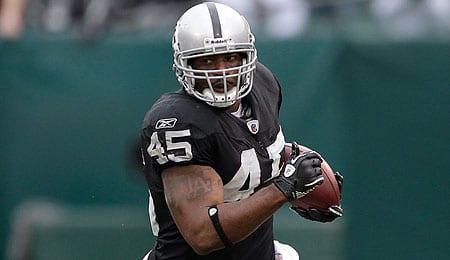 Marcel Reese was a nice threat out of the Raider backfield. (csnbayarea.com)

Today, we present our own picks for the 2013 NFL All Pro team.

Peyton Manning, Denver Broncos: Manning’s 2013 was quite simply the greatest season ever put together by a quarterback, and no stat shows that more than his touchdown to interception ratio (55 scores to only 10 picks) — a feat that may never be matched.

LeSean McCoy, Philadelphia Eagles: This pick’s pretty much a no brainer as Shady led the league in rushing by over 250 yards. And he’s a bit of a Kinect aficionado, to boot (see video below).

Marcel Reece, Oakland Raiders: Not only is Reece an impressive blocker and receiver out of the backfield, he’s also a great fill in halfback every time the brittle Darren McFadden goes down, proven by a solid 4.7 yards per carry and highlighted by a 63-yard touchdown.

Josh Gordon, Cleveland Browns: Gordon only needed 14 games this season to lead the NFL in receiving yards, and not just lead, but dominate, as his 1,646 were nearly 150 yards more than any other player.

Demaryius Thomas, Denver Broncos: Why Thomas? Oh let’s see…he was just the number one wideout on the most prolific offense in history. He put up 1,430 yards this year, and his 14 receiving touchdowns were bested only by a certain tight end, listed below.

Jimmy Graham, New Orleans Saints: Graham’s whopping 16 touchdowns through the air should make for an interesting contract situation moving forward, as the Saints have already stated they won’t hesitate to place the Franchise tag on him.

Trent Williams, Washington Redskins: Labeled immature early in his career, Williams has not only somewhat shaken that perception but last year he also overcame a team falling apart at the seams around him to put together what some experts believe was the best performance by a left tackle in the NFL in 2013.

Joe Thomas, Cleveland Browns: The rock solid Thomas has started all 16 games each year since being drafted by the Browns in 2007.

Evan Mathis, Philadelphia Eagles: Regarded as a journeyman before arriving in Philly in 2011, Mathis has found a home and helped solidify a line that allowed McCoy to lead the league in rushing last year.

Ben Grubbs, New Orleans Saints: The Saints’ prize free agent acquisition in 2012 has been anything but a disappointment, starting all 32 games and giving quarterback Drew Brees the time he needs to make this offense hum.

Alex Mack, Cleveland Browns: If Trent Richardson couldn’t succeed with this offensive line then what on earth made the Colts think he’d be any better in Indy?

Greg Hardy, Carolina Panthers: While not quite reaching his self proclaimed goal of 50 sacks last year, 15 sacks were still good enough to set a new franchise record.

Marcell Dareus /Kyle Williams, Buffalo Bills: Most teams just expect the big guys in the middle to chew up blockers and maybe stuff a run now and then. Buffalo, on the other hand, had these two combine for 139 tackles and 18 sacks while also freeing up space for their star rookie linebacker Kiko Alonso.

Robert Mathis, Indianapolis Colts: It’s funny to remember that some experts believed Mathis only produced because of the threat of Dwight Freeney on the other side. Mathis’ NFL-leading 19.5 sacks and eight forced fumbles helped Indy win what was a surprisingly weak AFC South.

Vontaze Burfict, Cincinnati Bengals: Burfict continued to reward the Bengals for taking a chance on him, leading the league with 171 tackles in 2013.

Luke Kuechly, Carolina Panthers: Kuechly was well deserving of the NFL Defensive Player of the Year honours in 2013, leading the feisty Carolina defense with 156 tackles and also picking off four passes.

NaVorro Bowman, San Francisco 49ers: Pairing up with fellow stud linebacker Patrick Willis, Bowman was fifth in the league with 145 tackles. We hope he can be the same player when he returns from an ugly looking knee injury sustained in the playoff loss in Seattle.

Richard Sherman, Seattle Seahawks: DeAngelo Hall may disagree, but in 2013 there was no cornerback feared more than Sherman. Not only did his eight interceptions top the NFL, but Sherman was also the emotional leader of the Legion of Boom, a secondary no offense wished to face.

Joe Hayden, Cleveland Browns: While four picks may not seem like All Pro numbers, we believe Hayden’s lack of interceptions is simply a result of the respect shown to him by quarterbacks not throwing in his direction.

Earl Thomas, Seattle Seahawks: Always known as a playmaker, 2013 was no different for Thomas as he racked up five interceptions, two forced fumbles, and over 100 tackles to help lead the Seahawks to their first championship.

Jarius Byrd, Buffalo Bills: Buffalo would be wise to give three-time Pro Bowler Byrd a long-term extension after placing the Franchise tag on him in 2013.

Matt Prater, Denver Broncos: While you may not be impressed with Prater’s NFL record 75 extra points, it would be tough not to respect the bigger record he broke in 2013, when he nailed a 64-yard field goal.

Johnny Hekker, St. Louis Rams: Other punters may have had a longer average, but no others could boast a 44.2 yard net average like Hekker.

Cordarrelle Patterson, Minnesota Vikings: We get the feeling the Vikings have only scratched the surface of Patterson’s potential, and his two returns for touchdowns could be a sign of great things to come.

Now it’s your turn. Let us know in the comments below whether you agree or disagree with our picks.

By Nick Wagner
This entry was posted on Tuesday, February 4th, 2014 at 3:13 pm and is filed under FOOTBALL, Nick Wagner. You can follow any responses to this entry through the RSS 2.0 feed. You can skip to the end and leave a response. Pinging is currently not allowed.