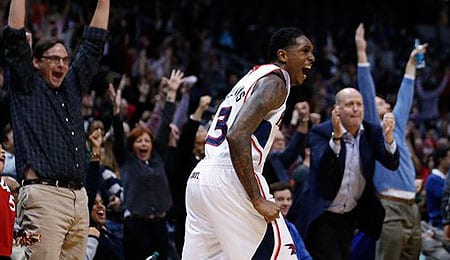 The dog days of January are upon us and now is the time when Fantasy owners need to dig deep and keep that competitive spirit. If your team has been beset with a number of injuries, yet you’re still in the playoff hunt, don’t despair. One of the cardinal rules of Fantasy sports is just make the playoffs and anything can happen from there. The best regular season team doesn’t always win the championship, especially if your team is healthy and talented during the playoff run. So buckle up and get ready for the stretch drive.

Marcus Thornton, SG, Sacramento Kings: Thornton is back — for one night, anyway. He has always been a potent scorer yet has been unable to muster the firepower this season. And it hasn’t been rookie Ben McLemore that’s thwarted Thornton, as we suspected might happen. On Friday, with DeMarcus Cousins and Rudy Gay nursing injuries, Thornton struck for 42 points on 16-of-27 from the field including seven treys (see video below for a taste of the damage he inflicted on the Pacers). Thornton should be valuable while Cousins and Gay are sidelined and this may propel him to greater things during the second half of the NBA season. The potential and talent is there.

Louis Williams/Shelvin Mack, PG/SG, Atlanta Hawks: We group these two players together because they are likely to equally benefit from the sprained ankle suffered Friday by starting PG Jeff Teague. Teague has already been ruled out for the next two games and potentially beyond. Both Mack and Williams will see plenty of playing time at both guard positions and will benefit owners in need of short-term assistance.

Rodney Stuckey, SG, Detroit Pistons: Stuckey started the season on fire then was victimized by a nagging shoulder ailment that affected his production. Now fully healthy, he is lighting up the scoreboard as the Pistons’ “instant offense” off the bench. Over his last five contests, Stuckey is averaging 20 points and shooting over 50 per cent from the field. At 31 per cent ownership (ESPN leagues), he is definitely a bargain.

Greivis Vasquez, PG, Toronto Raptors: Raptors Coach Dwayne Casey has been experimenting with Vazquez at the two guard spot in addition to his backup point guard duties behind Kyle Lowry. The results have been encouraging with Vazquez averaging 11 points, 7.5 assists and 1.3 steals over his last four outings. Keep an eye on him to see if the extended playing time and subsequent production continues.

Taj Gibson, PF, Chicago Bulls: We featured Gibson in this column last month, yet he remains under 50 per cent owned in ESPN leagues. He has been the model of consistency for the Bulls with double digit scoring, impressive field goal percentage, rebounding and block numbers. With Carlos Boozer and Joakim Noah subject to injury woes, Gibson is well worth owning and has big upside with more playing time.

Carl Landry, PF, Sacramento Kings: Here is our “sleeper” recommendation of the week. Landry has always been a productive NBA player and has been sidelined all season by a torn hip flexor. Now he’s back in action for the Kings and opportunity abounds. Jason Thompson has been inconsistent at the starting power forward spot and Sacramento lacks frontcourt firepower off the bench as well. Watch Landry closely over the next several days.

Ryan Kelly, PF, Los Angeles Lakers: With the Lakers’ rotating door of power forwards, Kelly has been the first teamer over the last several games and has shown the ability to score, rebound and record steals. It doesn’t hurt that the former Duke product can also shoot three-pointers efficiently.

Josh McRoberts, PF, Charlotte Bobcats: McRoberts is yet another former Duke standout that was mentioned previously — we recommended him in the season debut of The Wire Troll. What makes him unique is his ability to score via the three-point shot and produce impressive assist and steal totals from the power forward position. McBob won’t win any scoring titles, but can certainly be a statistical asset to your Fantasy squad.

Chris Andersen, C/PF, Miami Heat: With the numerous injuries suffered by the two-time defending champs, the Birdman has been asked to increase his playing time and productivity. Andersen can help you in rebounds, blocks and some scoring (13 point game in the last week), not to mention his wildly colourful and fabulous tattoos.

Andray Blatche, C/PF, Brooklyn Nets: Blatche is the poster boy for streakiness and inconsistency. He has been dropped and added more times than just about any player in Fantasy basketball. Right now, Blatche is on a roll for the Nets, who have won nine of their last 10 games. Ride him while the going is good.

Markieff Morris, Phoenix Suns, C/PF: Sure, the big twin is wildly inconsistent, but over his last five games, Morris is averaging over 19 points, six boards, two assists and even 1.2 treys. That’s some sweet production out of a centre-eligible player that is available in well over 60 per cent of ESPN leagues.

By Bob Raymond
Tags: Marcus Thornton
This entry was posted on Saturday, January 25th, 2014 at 3:58 pm and is filed under BASKETBALL, Bob Raymond, The Wire Troll. You can follow any responses to this entry through the RSS 2.0 feed. Both comments and pings are currently closed.