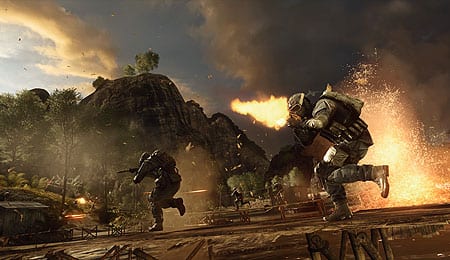 Do you like Dragons (Pass)? Because I’m gonna be… oh, never mind.

If you’ve already grown tired of the chaos contained in the vanilla maps of Battlefield 4, the first (of many) expansion packs comes to us in the form of China Rising. As the title suggests, these maps are all about seeing the wonderful plateaus and shimmering deserts of China blown to pieces in the prettiest of ways. This expansion includes four maps, all featuring vastly different sets of terrain and variables, a whole new set of challenges, new vehicles and the Air Superiority mode (for strict chopper/jet fights)!

This map is set in a baking canvas in the middle of the desert. The smooth sand dunes creating splashes of light as you run by make it easy to see why the place is called The Silk Road. Although this map is wide and open, marksmen and tank drivers may find it difficult to do their job effectively because the heat is constantly distorting images in the distance, making even the most eagle-eyed crew wary of any unchecked advance. Air support is crucial in this map in order for infantry not to be completely decimated by armour, so the skies fill up nicely overhead. Along with the usual armoured transports and tanks, we also have the dirt bike coming back to us finally, which definitely makes CTF games a bit easier on the legs.

This place is a damn madhouse. While it’s one of the prettiest maps in Battlefield 4, it’s a bit difficult to notice because death happens fast and often here. Through the damp, sloppy jungle, by the river rests a series of makeshift battlements, and the rice paddies create a serene feeling to all of the carnage that is held in the central archway. It’s damn dark in there, too, with plenty of nooks and crannies to hide in, and before you can make it to the other side you’ve taken six bullets, been revived, and then blown up by an incendiary grenade. Rush mode is almost unfair to attackers on this map, though, as the whole level is made out of choke points, and the attacker’s base never really moves up. Though Conquest is fun here, Onslaught can be infuriating, and Rush is just masochism at this point.

This is one of the more balanced maps in the expansion: it allows snipers to have their fun, is hilly enough for infantry to stand a chance against both armour and snipers, and the tanks have a decent time dodging all of the jets worrying about helicopters and anti-aircraft fire. In the middle of the map lies a radar dome that proves to be one of the most difficult points to hold in a map, as it rests on high ground with plenty of cover for all approachable directions. Scattered about are all sorts of storage tents that can be shot through by most weapons and obviously destroyed by larger ordinance. Rush is pretty straightforward on this map, and Air Superiority proved to be a real fun thing to try here as well.

This map is a reworked version of an old Battlefield 2 map, Dragon Valley. Mountains tower all around you, a grimy stream leads from objective to objective, and rickety bridges barely let tanks safely cross the muck — and when it’s not rendering you blind, the sun paints the canyons a most wonderful shade of gold. This is another map that just works well for any mode — the Rush checkpoints are spaced well and thoughtfully, and the Conquest map is well balanced, which in turn makes Onslaught and CTF much easier to handle.

Not every mode is going to be amazing on every map, but they hit where it really counts and each is going to have its own fans. That being said, the level construction is top notch, and the added content such as dirt bikes and a UCAV tool for the Support class (it’s the Combat UAV, y’all!) is great. There’s miles of content here, and many enjoyable hours added to the Battlefield 4 experience. DICE is off to a good start, catering to what players love: blowing things up beautifully.

By Jeff Cater
Tags: Battlefield 4
This entry was posted on Monday, December 23rd, 2013 at 6:23 pm and is filed under Jeff Cater, Video Game Reviews. You can follow any responses to this entry through the RSS 2.0 feed. Both comments and pings are currently closed.