The Wire Troll: With a Dash of Dynasty 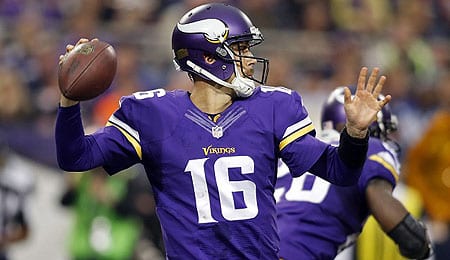 Each and every week of the NFL season some random players emerge from depth charts and make an impact. When this happens, fodder is produced for Fantasy owners to debate over. As such, we present to you The Wire Troll for Week 16.

Matt Cassel, Minnesota Vikings: We realize this is a total reach especially considering the Vikings will travel to Cincinnati on Sunday. So why are we high on Cassel? We watched him and his Vikings simply outhustle the red hot Eagles that we recommended was a good play in Week 15. Yes, that game was in Minnesota, which is a very tough place to play. We have been to that dome for baseball and football contests and it is ear shattering. As usual our excuse for choosing Cassel is that he is a veteran. Sure he failed in Kansas City (and things got ugly as you can see in the video below), and we realize Minnesota is out of the playoff picture. Those are also great reasons Cassel can be trusted. Basically, he has no pressure on him because nobody is expecting anything out of him. We also think Cassel can make the Vikings be bold. If he flourishes down the stretch, why not make him he starter next season? We all know they will draft a quarterback high this offseason. Dare they pull off a Green Bay like decision and make the high pick watch and learn? If so having Cassel on your roster to end the season could make him a Dynasty insurance policy. Or you could claim Mike Glennon.

Lance Dunbar, Dallas Cowboys: Dunbar made perhaps the play of the game on Thanksgiving when he gutted the Raider defense for 45 yards straight up the middle of the field. He finished the game with 12 rushes for 82 yards. He also tweaked his knee, knocking him out the duration of the season. However, starter DeMarco Murray has also had health issues historically. So owners of Murray should definitely consider Dunbar in Dynasty formats.

DeAngelo Williams, Carolina Panthers: It seems like the running back situation in Carolina has been a revolving door since the franchise’s inception. In our Week 10 Wire Troll we surmised that Jonathan Stewart would be the freshest option for the Panthers. However, Williams has remained steadfast and when Carolina is leading he is its horse. The Panthers will host the Saints in Week 16 and we all know New Orleans is a hollow shell of itself on the road. So, the Panthers figure to be steering and eating valuable clock time.

Jerrel Jernigan, New York Giants: By far the toughest weeks to make waiver claims are prior to Week One (before anybody has had a chance to break out) and the final week, when (especially in deeper leagues) the wire has been picked cleaner than a two-day old turducken at John Madden’s house. That being said, we think the 5’8″ Jernigan could be in for a good week against the Lions. In Week 15, Victor Cruz suffered a knee sprain and a concussion, Hakeem Nicks continued his disappointing season with one catch for five yards, and Rueben Randle failed to record a catch. Meanwhile, third-year pro Jernigan had a breakout day, hauling in seven of eight targets for 67 yards. Cruz will probably miss this game, and since Detroit has been one of the worst teams covering wideouts this year, we feel Jernigan should help this weekend.

Robert Woods, Buffalo Bills: The 2013 draft had no shortage of talent at the wide receiver position. Tavon Austin (St. Louis Rams), DeAndre Hopkins (Houston Texans), and Cordarrelle Patterson (Minnesota Vikings) were selected in the first round, and all three have flashed that ability at times this year. Other rookie receivers have made an impact as well — guys like Justin Hunter (Tennessee Titans), Terrance Williams (Dallas Cowboys), Kenny Stills (New Orleans Saints), Ace Sanders (Jacksonville Jaguars), and — perhaps the best of the bunch — Keenan Allen (San Diego Chargers). All these young wideouts appear to have bright futures, however, in Dynasty leagues (and redraft leagues for that matter) we’re looking to buy low, and a somewhat cheap and available wideout that could be poised to make big progress in year two is Buffalo’s second round pick out of USC, Woods. When we see the Bills draft quarterback E.J. Manuel in the first round and follow that up with Woods in Round Two we feel as though these two will be given every chance to grow together into this offense. Stevie Johnson is a solid veteran that Woods can learn from, but with Johnson’s body seeming to be more fragile with every passing season, Woods should be the number one receiver sooner rather than later. With Buffalo’s running attack helping to open things up for the passing game, we believe Woods is a nice Dynasty stash now, and should be high on our 2014 sleeper list.

Zach Miller, Seattle Seahawks: This season the Cardinals boast a top 10 defense against quarterbacks, running backs, and wide receivers, yet have been completely unable to cover opposing tight ends. Over the last four weeks, tight ends have scored five times against Arizona, including Philadelphia’s Zach Ertz and Brent Celek combining for three touchdowns in Week 13. Despite the fact that Miller has been inconsistent this year, we expect the Seahawks to exploit the gaping hole in Arizona’s defense this week.

Detroit Lions Defense vs. New York Giants/New York Giants Defense @ Detroit: Never in the history of the NFL have two more interception-prone quarterbacks gone head to head with neither being in danger of losing their starting job! OK, that might be a bit of an overstatement, but with Eli Manning having already thrown 25 picks, combined with Matthew Stafford getting intercepted nine times over the last four games alone, that might not be too far off either. We’d feel comfortable streaming either widely available defense this week, but we prefer the Lions since they are at home and still have something to play for this year.

By Josh Johnson
This entry was posted on Tuesday, December 17th, 2013 at 2:00 am and is filed under FOOTBALL, Josh Johnson, Nick Wagner, The Wire Troll. You can follow any responses to this entry through the RSS 2.0 feed. You can skip to the end and leave a response. Pinging is currently not allowed.