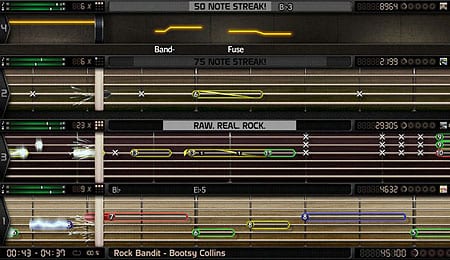 BandFuse supports up to four players, including vocals.

Ubisoft’s RockSmith landed on the music game market with quite a bit of fanfare. Realta’s BandFuse: Rock Legends doesn’t quite have the same marketing muscle behind it, but it does have a stronger core mechanic, one that proves to be a better teaching tool than its bigger-budgeted competitor.

BandFuse, like other peripheral music games, uses the primary controller essentially to navigate menus. The package comes with a USB-to-1/4″ adapter, one that seemed heavier and higher quality than the one from its immediate competitor. We had no noise or line issues when using BandFuse’s adapter.

Lag is always a concern in music games, and BandFuse opens the game up with a calibration process. This can be revisited at any time, and while we’ve never seen a lag calibration like this (tapping a button to a metronome), it seems to work as we didn’t encounter any issues. However, it would have been nice for a manual millisecond adjust.

BandFuse is a lot less colourful than other games in the music genre. We like that — we find it less distracting when reading the notes — but some may feel that it lacks punch. In general, the top half of the screen is used for a song’s video (live performances substitute when the song has no original video). During practice sessions, generic guitar close-ups sweep by.

BandFuse supports up to four players, and when you’re playing with other musicians, you’ll see their notes taking up the bulk of the screen. The game also supports vocals, and that takes the top part of the screen.

It’s functional, but not spectacular. Still, for a game that’s designed primarily as a learning tool, it gets the job done.

When we reviewed Rocksmith 2014, our biggest gripe about Ubisoft’s guitar teacher was its vertical scrolling. We felt this did a disservice to newbie guitar players, as it didn’t really jive with the standard tab readouts. (Theoretically, we suppose you can complain that no game on the market teaches you to read musical notes, but that’s probably a bit ambitious for a console game.) BandFuse employs horizontal scrolling that looks identical to guitar tabs with one added bonus — notes are colour-coordinated to provide you with recommended fingering. It’s not totally necessary, but as a teaching tool, it helps you develop good habits.

We’ve played piano and guitar our whole life, so we approached BandFuse from a few different angles. We tried songs we already knew, and found that BandFuse helped us perfect timing. For songs that we didn’t know, playing low levels gave us a sense of the song’s key and some basic notes. Playing on the highest level produced a note-for-note transcription, which took a lot to learn and definitely exposed our weak spots (hammer-ons are not our friend). Functionally, we found this a much easier way to learn a new song than BandFuse’s competitor.

On the highest levels of songs, guitar players can choose between lead and rhythm. We’re not sure why these options aren’t presented at all levels, as some new guitar players will may want the option to just learn a song’s chords. The level of difficulty scales up quite rapidly, and there’s a huge difference between level 3 and level 4 in particular (out of five). The vocal part of the game, which can be played independently as a vocal tutorial/karaoke game, is licensed directly from Harmonix, so if you’ve played Rock Band, this will look very familiar.

One thing that BandFuse and Rocksmith both lack is strong support for learning chords. BandFuse is better in that because of its tab format, but there’s still no real strong tutorial for it. Instead, you learn chords as you play them in songs.

In addition to playing songs in either quick play or tour mode, you’ll probably spend a lot of time in BandFuse’s ShredU section. LickLab breaks any song in the game down to segments, then lets you slow down and master them. Practice mode lets you play through a song at a speed of your choice. It’s just the notes without the backing track, which means you can really focus on what you should be playing (it definitely helps if you’re really familiar with the song to begin with).

BandFuse also includes a variety of generic backing tracks. These are pre-recorded tracks designed to allow players to jam and improvise over them. Unfortunately, there’s not that much variety and the tracks don’t really adapt to how you play. This is one area that definitely lacks compared to Rocksmith.

The game also includes a library of interactive tutorial videos, half of which are two-minute interview blurbs from guitar gurus like Slash musing philosophical about picking gear or whatever they’ve been prompted to discuss. These can be informative but are not particularly helpful since the interactive parts are played at full speed with no option to go through LickLab features.

The comparison between BandFuse and Rocksmith is inevitable. RockSmith has more features and a prettier overall presentation. BandFuse is more streamlined but works better as a core teaching tool. Both are good packages, and the best analogy we could use is that BandFuse is a documentary while RockSmith is a dramatization of the same story. The experience you enjoy better will depend on your overall preference.

BandFuse is the most effective “learn a song” game on the market. However, its teaching features are a mixed bag, and the lack of a backing music generator limits title’s replayability outside of the core song element. What it does, it does very well, and while BandFuse won’t replace a live in-person guitar teacher, it’s the next best thing and can definitely help even neophyte guitarists perfect difficult songs.

By Mike Chen
Tags: Realta, Rocksmith, Ubisoft
This entry was posted on Monday, December 16th, 2013 at 6:50 pm and is filed under Mike Chen, Video Game Reviews. You can follow any responses to this entry through the RSS 2.0 feed. Both comments and pings are currently closed.