Start ’em, Sit ’em: DeMarco Murray Will Blow Up (In a Good Way) 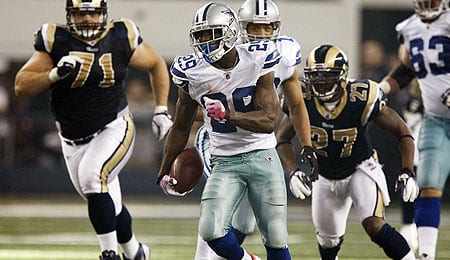 For those that remain in the race, this is the time of year when you can’t just consider stats; you also have to consider psychology. What teams are still fighting, what teams are dialing it back for the playoffs, and what teams have packed it in? So, once again let us help you size up the league, so you can get sized for a ring.

Alfred Morris, RB, Washington Redskins vs. DAL: The only difference between Morris and Murray in Week 16 is that Dallas’s defense is actually worse than Washington’s against the run. If you have a running back in this game you’re looking good.

Brandon Marshall, WR, Chicago Bears @ PHI: Earlier in the year we were saying it was Marshall that was creating single coverage opportunities for the other Bears receivers, but at this point, it can be said that Alshon Jeffery is returning the favour.

Rod Streater, WR, Oakland Raiders @ SD: Streater needs less that 150 yards to be the first Raiders receiver since Randy Moss to eclipse 1,000 yards receiving. Streater has two games to reach this plateau, but with the way the Chargers defend the pass, he may only need one.

Kirk Cousins, QB, Washington Redskins vs. DAL: Cousins has to be salivating on his playbook. Not only are the expectations low, but he gets to go up against the inept Dallas defense. Cousins should feast this weekend.

Dallas Defense @ WSH: Honestly, with the exception of Murray, we would sit the entire Dallas Cowboys organization if we could.

Matt Cassel, QB, Minnesota Vikings @ CIN: Let us put it like this, the people who believe that Cassel is the answer, are the same people who bought season tickets to the XFL. Sit him.

Shane Vereen, RB, New England Patriots @ BAL: Well, it appears Vereen is due for his annual disappearing act, not to mention he’s at Baltimore in what is sure to be another epic showdown between the Patriots and the Ravens — and that usually means offense will be scarce.

Jets receivers vs CLE: We have to assume that if you are still playing any Jets receivers, it’s because you have to, but in the off chance that’s not the case, stop it — please, stop it.

Drew Brees, QB, New Orleans Saints @ CAR: We try to at least have one “are you nuts?” pick and we think Brees fits the bill. The Carolina defense is very stout and this time the Saints aren’t coming off a bye or playing at home. We think Brees will struggle… well, at least as much as he ever struggles.

By Vaney Hariri
This entry was posted on Wednesday, December 18th, 2013 at 5:51 pm and is filed under FOOTBALL, Start 'em Sit 'em, Vaney Hariri. You can follow any responses to this entry through the RSS 2.0 feed. You can leave a response, or trackback from your own site.