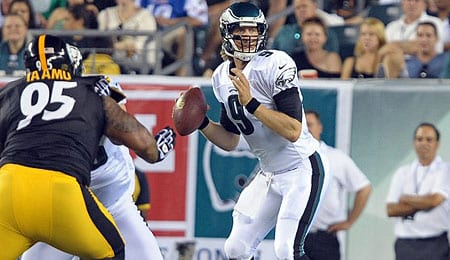 Each and every week of the NFL season some random players emerge from depth charts and make an impact. When this happens, fodder is produced for Fantasy owners to debate over. As such, we present to you The Wire Troll for Week 10.

Nick Foles, Philadelphia Eagles: Like a Manning brother, Foles hucked seven TD passes at Oakland (see video below for the record seventh touchdown pass being celebrated by Eagle fans). Surely this spells the end for perpetually injured Michael Vick. The future is now, Philly fanatics, so Foles needs to be under centre for the next five years regardless of your record. Obviously there is something here, so Fantasy owners should go all in.

Case Keenam, Houston Texans: If the Texans had a kicker, Keenam would have beaten Andrew Luck. In case you forgot about Keenam’s college career here is a little reminder: He amassed nearly 20,000 yards, which included three seasons of over 5,000 yards. Keenam also tossed 155 TDs against just 46 INTs. His weapons now include the aging but stellar Andre Johnson (who Keenam connected with nine times for 229 yards and three TDs against the Colts) and stealthy rookie DeAndre Hopkins (more on Hopkins later). Keenam might not be Fantasy starter material just yet but stashing him to replace Sam Bradford or Terrelle Pryor is highly recommended.

Jonathan Stewart, Carolina Panthers: Stewart finally made his season debut Sunday vs. the Falcons, and he was eased into scheme, rushing for a team high 43 yards on nine carries and catching three balls for additional 22 yards. With DeAngelo Williams and Mike Tolbert seeing as many touches it will be carousel to find the hot hand. Stewart should be the freshest of three and with the Panthers lurking in the playoff picture he can be workhorse. Stash him now for cheap before he explodes, but know a tripod needs three legs in order to stay balanced.

Shonn Greene, Tennessee Titans: Who? What? Why? That’s right — for whatever reason, Greene has been given an uptick in touches. He blasted into the end zone at St. Louis on Sunday for his first score as a Titan. Now, a 15-touch minimum is a realistic possibility. Greene is a between the tackles chaotic runner, whereas starter Chris Johnson is not. Do we have a case of thunder and lightning here? Yes, we do realize that underachieving Johnson just ran for 150 yards in Week Nine and that Greene’s chances are limited. However Greene could be a touchdown vulture and given his veteran status and pedigree (back-t-back 1,000-yard seasons in his last two years with the Jets), he is worth a handful of dollar bills as an insurance policy.

DeAndre Hopkins, Houston Texans: We shouted to the heavens that this Texan had Rookie of the Year spray painted all over him. Then he was showered with a trending reality, a concussion. That was in the preseason and it may still be affecting him. Hopkins has had some big games, but he’s had some duds as well. Such is the life of a rookie. He was supposed to take the pressure off Johnson and apparently the Colts respected Hopkins enough to let Johnson destroy them for two quarters. Now Johnson will be a marked man and that leaves room for Hopkins to flash us the same brilliance that made us fall in love with him in the first place.

Mike Brown, Jacksonville Jaguars: Thanks to Cecil Shorts and Ace Sanders injuries, as well as another suspension for Justin Blackmon (who is on his way to the Betty Ford Clinic), Brown as gained valuable experience. He has 12 receptions for over 200 yards and touchdown in the last three games. It seems as though QB Chad Henne trusts the sophomore Brown downfield, leading to an average of 20.4 yards per reception in the last two games. Brown is not Blackmon and in some ways, that is a good thing. Drop a couple curious bucks down on Brown and just maybe we will all say in unison, Justin who?

Coby Fleener, Indianapolis Colts: Fleener and QB Andrew Luck were college teammates and many thought the only reason Fleener was drafted was because Luck told the Colts to do so. We have even questioned Fleener’s ability at this level. Okay, so he has had his issues, but his growth has been steady. Fleener had just five targets on Sunday, which he turned into three receptions for 64 yards. With stud WR Reggie Wayne lost for the season, Fleener should see an increase in looks. And with the Colts running game struggling, Fleener could be a comfortable commodity for longtime teammate Luck in the red zone.

Now it’s your turn. Let us know in the comments below which players you’re targeting on the wire this week.

By Josh Johnson
This entry was posted on Tuesday, November 5th, 2013 at 3:27 pm and is filed under FOOTBALL, Josh Johnson, The Wire Troll. You can follow any responses to this entry through the RSS 2.0 feed. Both comments and pings are currently closed.