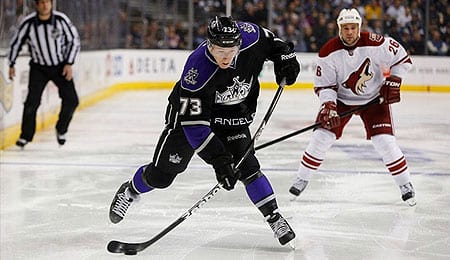 Tyler Toffoli (left) has been putting up plenty of points. (Ric Tapia/Icon SMI)

The usual edition of The Wire Troll has not been sacked but condensed in a quicker form this week. All that means is that the explanations are shorter but we have three picks to help you out of your Fantasy pickles.

Tyler Toffoli, RW/C, Los Angeles Kings: How is Toffoli so low as far as ownership rates? Call it a case of some Fantasy hockey owners selling high. However, he still has some value and if you look past his average time on ice, there is still a little more value to be had. That 13:06 ATOI is a big downer and so are those blocks, hits, and even power play points to an extent. However, 15 points in 19 games is a bit hard to ignore, plus he’s shown a penchant for potting big goals (see video below). Also, Toffoli averages over two shots a game in very limited time. If you need a third or fourth centre or right winger, he is at the very least worth taking a shot on this week. After that, his 15 per cent ownership rate may go up again.

Tyler Johnson, C, Tampa Bay Lightning: Some experts are not high on Johnson, but we are. This is because Tampa Bay seems to just find these guys in its farm system (which has been one of the best over the last five years) that can be plugged into top six time. Also, if you toss in a robust ATOI of 17:36, you have the makings of a solid Fantasy player that averages a point every other game. Johnson also averages over two shots a game and averages almost four attempts per contest. He does not hit much but blocks a few shots along with seeing some occasional power play time. That is not so bad to take, right? Right!

Patric Hornqvist, RW, Nashville Predators: Again, this is a gamble but players who average three shots or more on goal per game just are worth it. On a bad offense, Hornqvist is also one of the few legitimate power play and power forward threats which bodes well for the Fantasy owner. He is also only owned in about 10 per cent of leagues. Hornqvist’s only real issues are health and Coach Barry Trotz’s constant power play juggling. If you need a guy that will play some decent minutes, have special teams potential and pop in the occasional goal, then Hornqvist is your guy.

Just as a heads up, the 2013 RotoRob Hockey Awards are coming out next weekend or so, therefore there may not be an edition of The Wire Troll next Sunday. In our Awards, there will be special sections that honour the waiver miss and hit of the year and we hope everyone enjoys it. Good luck this week with your Fantasy leagues along with the Christmas shopping and decorations.

By Chris Wassel
Tags: Los Angeles Kings, Patric Hornqvist, Tampa Bay Lightning, Tyler Johnson, Tyler Toffoli
This entry was posted on Sunday, December 15th, 2013 at 8:26 pm and is filed under Chris Wassel, HOCKEY, The Wire Troll. You can follow any responses to this entry through the RSS 2.0 feed. Both comments and pings are currently closed.