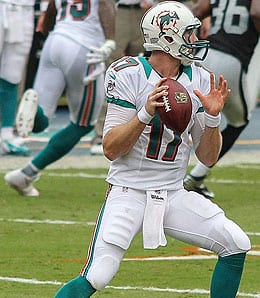 Ryan Tannehill has been getting it done lately.

Each and every week of the NFL season some random players emerge from depth charts and make an impact. When this happens, fodder is produced for Fantasy owners to debate over. As such, we present to you The Wire Troll for Week 15.

Ryan Tannehill, Miami Dolphins: Over the last three weeks, Tannehill has quietly put up solid numbers, with three touchdowns against Pittsburgh, 331 yards and two scores at the Jets, and even 310 yards against the stingy Panthers defense. Going up against a Patriots defense that has allowed a combined 663 yards passing to the likes of Jason Campbell and Case Keenum over the last couple weeks, we think Tannehill is a decent start in Week 15. Besides, the dude is damn accurate when no one is coming at him and he’s just throwing the ball around some torn down buildings (see video below).

Kirk Cousins, Washington Redskins: Robert Griffin III owners are in panic mode. In his latest move in an obvious attempt to get fired (and collect the remaining $7 million left on his contract), Head Coach Mike Shanahan has now threatened to sit Griffin for the rest of the season, claiming to be concerned with the young quarterback possibly getting hurt. It should be noted that’s a complete 180 degree turn from Shanahan’s previous stance that RGIII needed as many reps as possible in order to grow into the position. Cousins played well in his lone start last season, topping 300 yards (something RGIII hasn’t done since Week Three) and getting a win. The situation in D.C. is extremely volatile right now, so normally Cousins would be hard to recommend, but with so many available quarterbacks facing tough match-ups this week, desperate Griffin owners may be left with no choice but to pick up Cousins and wait and see what Shi… oops, I mean Shanahan decides. If the Skins are able to summon any heart (somewhat unlikely with a coach who’s already checked out) they do have great match-ups over the next two weeks, facing Atlanta and Dallas, which was unable to force a turnover or even a punt Monday versus the Josh McCown led Bears.

Daniel Thomas, Miami Dolphins: In Week 14, when starting running back Lamar Miller left the game after suffering a concussion, Thomas did something not many people expected — he actually played… well. Racking up 105 yards and a touchdown on the road against a desperate Steelers defense definitely caught our eye. With the league becoming ever more cautious in clearing concussion victims to return to play, Thomas makes a nice play in Week 15 against a New England defense that can be soft against the run at times.

Toby Gerhart, Minnesota Vikings: With the Vikes sitting at 3-9-1, it’s been a disastrous season in Minnesota. The three-way quarterback carousel has been a joke, and just when Vikings fans thought it couldn’t get any worse, Adrian Peterson gets carted off the field. Thankfully the injury isn’t thought to be serious enough for surgery, but why on earth would they consider rushing him back at less than 100 per cent at the end of a lost season? Since Gerhart has played well when given the chance (including 89 yards and a score on 15 carries in Week 14 versus Baltimore), we believe that if Minnesota shuts AP down for the season, Gerhart should receive the vast majority of touches for this team moving forward.

Da’Rick Rogers, Indianapolis Colts: We discussed Rogers in last week’s Wire Troll when we recommended LaVon Brazill. Coincidently, both Rogers and Brazill scored two touchdowns each on Sunday. We all but sent Rogers home to mama a week ago. Now, since the Bengals shackled T.Y. Hilton (two receptions for seven yards) we finally saw what Rogers is capable of. He led the team with nine targets, six receptions and 107 yards.

Cordarrelle Patterson, Minnesota Vikings: In our post 2013 draft rookie report, we wrote that we expect the Vikings to ease Patterson into the NFL. They have done exactly that. He spent the early portion of the season getting used to NFL contact as a kick returner. Now, as we near the end of the season, Patterson has recorded 14 of his 34 receptions in the last three weeks, including an extremely athletic 79-yard TD reception on Sunday. He has game-breaking ability and his growth has been gradual. Fellow rookie Tavon Austin found his feet in the fire early on and only now has he found his footing. Patterson, meanwhile, can eventually be the next Percy Harvin and don’t be surprised if gets massive production in the weeks to come. Can you trust him? Maybe the better question is do you not trust someone currently in your lineup?

Andrew Quarless, Green Bay Packers: It took a few weeks, but Quarless has found his niche in the Packers offense. He didn’t have a Jimmy Graham-like day Sunday, but his six receptions for 66 yards and a touchdown was probably more than your tight end mananged. Quarless made the most of his seven targets and he was looked to in crunch time. Green Bay is a team on the playoff fence and it hadn’t won a game in a month. Suddenly, he records a career game in receptions and the Pack wins? Sounds like the Packers found something. They even won with Matt Flynn at the helm. Aaron Rodgers could be back soon and we all know he can spread the ball around, not to mention that no one will be game planning for Quarless.

Philadelphia Eagles: So, as we were deciding which defense to recommend we checked to see who the Falcons or Redskins were playing. Then we discovered they were playing each other and we got really scared. We continued to our search, and then found the Eagles Defense, which has not give up more 21 points since Week Two. Linebackers DeMeco Ryans, Mychal Kendricks, Connor Barwin and Trent Cole have been huge. Ryans is ninth in the league 110 tackles while Kendricks leads the NFL four fumble recoveries. Cornerback Brandon Boykin has four INTs and two fumbles forced. They do give up the third most yards per game at 398.1, but the Eagles offense is averaging the third most yards per game at 409.3. The game will be on fast dome track at Mall of America Field in Minneapolis and we believe the pace will set by Philadelphia.

By Josh Johnson
This entry was posted on Tuesday, December 10th, 2013 at 5:07 pm and is filed under FOOTBALL, Josh Johnson, Nick Wagner, The Wire Troll. You can follow any responses to this entry through the RSS 2.0 feed. You can skip to the end and leave a response. Pinging is currently not allowed.