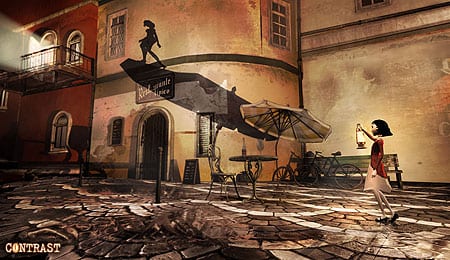 Contrast’s unique style is undermined by its problematic controls.

Contrast has been on the indie radar for a number of months. Since it first graced preview pages, it stood out as a possible Playstation 4 gem — a game with a unique gameplay hook and a bold and defined sense of style. Sony believed enough in the game to make it a free launch title through the Playstation Plus program. You can’t argue with free, but does it come with enough substance to back up its style?

Contrast is a pretty straightforward platformer, which means that jumping is your main action. The game’s big hook is the ability to jump in and out of shadows, which is done through a tap of R2 when shadows are obviously on the wall. Unfortunately, lead character Dawn’s jumps just don’t feel that precise. It’s similar to the feel of Little Big Planet’s floaty jumps, except in a 3D perspective, which doesn’t have a lot of give for lack of precision. This is a little more forgiving in 2D mode, and Dawn’s additional forward dash is effective when in this perspective. However, when a game’s primary gameplay element is jumping and it’s problematic for about half of the game’s puzzles, there’s a severe issue with the overall design.

You haven’t seen many games like Contrast, and that immediately jumps out — no pun intended. From its slightly cartoonish interpretation of early 20th century France to its distinct interplay of light and shadow, Contrast is bursting with strong aesthetics and a unique artistic vision. It’s very reminiscent of Tim Burton’s claymation films (The Nightmare Before Christmas, James & The Giant Peach) and visually it’s as charming and colourful as its inspiration. Couple that with good voice acting and a unique score and Contrast hits all the marks in the aesthetics department.

Contrast has striking aesthetics, a unique concept, and a lovely little story. So, what’s wrong with it?

When we played the demo for Contrast at PAX Prime, we could overlook a lot of this, since we just figured we needed time to get used to the game’s feel and we were surrounded by a bazillion people waiting to try anything PS4. But now that we’ve had the proper time to sit with it at our leisure, those issues haven’t gone away.

As a game, it’s just not designed that well. Which is a shame, because it really could have stood out as a strong launch title for the PS4.

Gameplay essentially consists of platforming and puzzle-solving. Much of this involves the transition between 3D and 2D — in many cases, puzzles are solved by manipulating light sources to provide the shadows that give your 2D figure appropriate places to jump. Some of these puzzles are remarkably straightforward but others just remain head-scratching and frustrating. This problem compounds when you’re trying to reach a hard-to-reach place but the game’s jumping issues get in the way.

Pacing is the key to a strong platforming game. The genre’s best games create a rhythm to the jumping and movement, making gameplay feel more instinctive rather than intentional. Unfortunately, much of Contrast’s platforming feels clumsy and ill-conceived, and the floaty feel to the jumps doesn’t help. The game’s core hook — jumping in and out of the shadow world — could have worked beautifully had it been executed better. Unfortunately, a combination of poor platforming design and strange occasional camera angles takes the joy out of the main gameplay mechanic.

We got through much of Contrast because of the story and art style. While we still encountered plenty of frustration with the game’s inherent design, its charm propelled us through the relatively short length (about five hours). If the game’s creative concepts don’t naturally appeal to you, Contrast’s many hiccups will make you want to see what else the PS4 has to offer. But hey, at least you’ve got a game that will inspire cosplayers for the next few years.

By Mike Chen
This entry was posted on Monday, December 9th, 2013 at 9:09 pm and is filed under Mike Chen, Video Game Reviews. You can follow any responses to this entry through the RSS 2.0 feed. You can skip to the end and leave a response. Pinging is currently not allowed.