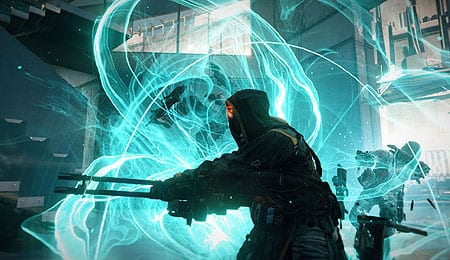 The Helghast remain a worthy foe.

Without exception, every publisher longs for a “killer app” to pair with the launch of a new console, and if it’s a shooter, so much the better. When the PlayStation 3 launched, Sony went with Resistance: Fall of Man, a completely new I.P. at the time. Now, as the PlayStation 4 hits stores, it’s turning to its other FPS franchise to carry the banner with Guerrilla Games’ Killzone: Shadow Fall.

Sony’s new controller allows for more functionality than ever, and Shadow Fall seems to make use of every last bit of it. The core experience is familiar with bumpers and triggers controlling aiming, shooting and lobbing grenades at enemies. Many guns contain a secondary fire mode that is activated by pressing down on the d-pad, which allows for some cool alternatives during combat. You’re still limited to two guns, however, and switching between them is almost comically fast.

New to the series’ console version (though seen in the Vita’s Mercenary entrant) is the OWL — a small drone that’s docked to your armour and can be dispatched for various purposes. Its four primary functions are a basic attack, an EMP-like shock, a deployable shield and a zip line that allows you to quickly descend the game’s large-scale locations. There are also situation-specific abilities, such as hacking, and it can revive you as long as you’re carrying an adrenaline pack.

It’s an invaluable tool… as long as you can get it to do what you want. Its functionality is mapped to the new, centrally located touch pad, and in theory each direction corresponds to an ability. The problem is that we frequently had the controller fail to recognize our input. In combat that can be a serious issue, especially when facing enemies with shields that need to be lowered by your OWL. Granted, it works more often than not, but it failed too many times to ignore.

Everything else works smoothly, albeit with one caveat: online shooting doesn’t seem as accurate as it should be when aiming down the sights. This can be frustrating when fighting straight up with someone that sees you, as the game takes on a Halo meets CoD feel in which enemies absorb a lot of rounds. As a result, we found ourselves firing from the hip in pretty much every semi-close encounter.

As a showcase for the PS4’s graphical capabilities, Killzone: Shadow Fall hits all the high notes, starting with the game’s incredible lighting and picturesque backgrounds. It’s hard not to get excited about what the future holds for console owners when the game shows off a gorgeous, futuristic city as you fly in on an aerial transport. The stark contrast between the semi-utopic ISA half of Vekta, and the industrially hardened and poverty stricken New Helghan allows for a broad range as well.

Even with the whole game outputting in 1080p, the frame rate never dipped during gameplay. The character models and various robots all look sharp, though some of the game’s few low points occur during cut scenes with faces that just don’t quite look up to snuff. There are also a few odd animations here and there, usually relating to melee attacks in which instead of cool looking assassinations you get odd smacks with weapons that don’t look damaging enough to disable a foe, much less kill it.

Voice acting in Shadow Fall is the weakest aspect of the presentation. Some of the performances just don’t click, and the audio mixing seems a little funky — to the point that we played the majority of the game with the subtitles enabled to make sure we didn’t miss dialogue. The soundtrack, however, is quite good. We enjoyed the non-traditional assortment of tracks, and the way they match up with the type of segment being played (stealth, action, etc.) is spot on. Rounding it out is a strong array of sound effects with gunfire and explosions that have a real impact.

Set decades after the events of Killzone 3, Shadow Fall begins with the ISA and the Helghast sharing the world of Vekta… this in the wake of the “terracide,” which rendered Helghan uninhabitable. Essentially, the surface has been split in half via a massive planet-wide wall (think East/West Germany) with the ISA on one side and the Helghast on the other. Although it never delves too deeply into the socioeconomic issues, the game leaves little doubt as to who are the haves (the ISA) and the have-nots.

This backdrop allows for a decidedly different narrative than previous games in the series, shifting away from full-scale war and toward a more clandestine conflict. You play as Lucas Kellan, one of the ISA’s “Shadow Marshals,” and also someone that watched his father gunned down whilst trying to leave newly-controlled Helghast territory years ago. Saved by Sinclair, who is now your commanding officer, Kellen is tasked with a series of dangerous missions.

By moving missions from a macro stage to a micro one, Shadow Fall makes your actions seem more important as you’re constantly in the thick of the political machinations and terrorist plots, rather than just some solider in a war of millions. They also put a heavier emphasis on stealth and planning out your actions, two things that rarely play a major role in a shooter. It’s a gameplay choice that ties in well with the sizable levels, allowing you to tackle the same objective in multiple ways — although we think it’s pretty clear Killzone wants you to adopt a measured approach.

While we generally enjoyed the more deliberate pacing, there are times when Killzone gets itself into trouble by wandering too far outside the genre’s established comfort zones. For example, there are a couple of extended zero-gravity sequences that feel a little too much like a poor man’s Dead Space. By far the worst, however, are the game’s freefalling sections, particularly the second one. They control sloppily and offer no clear path to follow. More than half our total deaths occurred while dodging crumbling buildings.

Even with those missteps, the roughly 10-hour campaign contains more hits than misses, and it’s absolutely a stronger effort than what we’ve come to expect out of the increasingly multiplayer-centric first-person shooter marketplace.

Transitioning over to online multiplayer, Killzone: Shadow Fall has a definite focus on accessibility. Unlike most modern shooters that stagger weapon and ability unlocks behind arbitrary experience thresholds, Killzone allows access to all three character classes (scout, support and assault) and their unique weapons and abilities from the start. This isn’t a game in which whoever has put in the most hours has the best stuff; it’s about learning how each class functions in conjunction with the rest of your team.

You do still increase rank by completing in-game objectives, but as noted it doesn’t give you the leg up on newer players in terms of equipment, which is nice for those of us that don’t devote all of our gaming hours to a single title.

There are 10 available maps, all of which are well laid out, along with a handful of game modes. That includes Killzone’s signature War Zone, which strings together multiple objectives into a single game with the side that prevails in three (or more) of the five rounds earning the win.

Everything comes together quite well here, though we did have a couple of gripes (beyond the ADS issues detailed in the controls section). One is that since the spawn point never moves, a dominant team can set up in ways that make it hard to turn the tide. Also, we’ve run into laggy matches at a much higher clip than we did in either Ghosts or Battlefield 4, though perhaps that’s related to it still being so close to the system’s launch.

Although we’d stop short of calling Killzone: Shadow Fall a full-blown system seller, Guerrilla Games has done a very good job showcasing the PS4’s potential and moving the series in a different direction. If you’ve invested in the system, this game belongs in your library.

By HC Green
Tags: PlayStation 3, Sony
This entry was posted on Monday, December 2nd, 2013 at 5:06 pm and is filed under Herija Green, Video Game Reviews. You can follow any responses to this entry through the RSS 2.0 feed. Both comments and pings are currently closed.