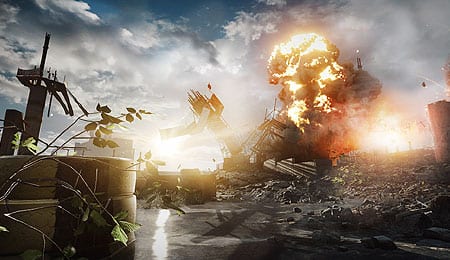 Stuff blows up in Battlefield 4. Lots of stuff.

Violence became more prevalent in the waves, drowning the weak and unlucky. Droplets of water cut through the air, stinging my face, and the wind is almost making me roll over onto my back, but I still don’t think they know I’m here. Better peek over this here edge… I don’t think they saw me… no, they didn’t. Well… here goes nothing. Wait… they’ve all got guns on me, I gotta get down! Return fire! Why are they running from me? There’s about six of them I think… why are they running? Man, I’m a badass…

— Final thoughts of Pvt. Spunkmeyer as an aircraft carrier loses a fight against mother nature, running ashore during Parcel Storm.

Battlefield 4, developed by the famed DICE and published by none other than Electronic Arts, sets the new standard for online console warfare. Sixty-four player capable, jam packed with more multiplayer modes than you’ll really know what to do with, and powered by the ever-evolving Frostbite engine, Battlefield 4 has an intensity factor that’s almost impossible to match.

This is all old-hat for DICE, and it’s retained a default scheme almost identical to Battlefield 3 — however, it’s also given players a lot of options when it comes to personal preference. Sensitivity and inversion customization are there, plus you have access to a large number of alternate control schemes that range from almost remapping the whole pad to simply switching two buttons around.

Playing on a PlayStation 4 and using the new DualShock 4, we came away completely impressed. We’ve long been disappointed with the performance of the DualShock controllers when it comes to first-person shooters, and we can confidently say this is one of the most comfortable controllers for shooters we’ve used.

If you’ve played any Battlefield title on console , the setup will be immediately familiar but far more comfortable and effective. Button presses have a snappy response, and you never have that feeling “But I was pushing square!” The only thing keeping the control department from a perfect score is the almost non-utilization of the touchpad. It’s understandable considering that the game has been released on about five platforms, all with different specs and gimmicks, but it still would’ve been nice to be able to navigate the battle map with your fingertips.

Upon first seeing the game in action, the visuals immediately wow. Faces are filled with emotion, uniforms look dirty and worn, and every on-screen effect had the utmost care taken with its creation. The amount of particles and moving parts look amazing, whether it’s an EMP blast or a skyscraper crumbling to the ground, and it not only looks amazing, but it consistently runs at a smooth clip. Campaign seems to be optimized to run at about 40 FPS (just guessing), and multiplayer seems to stick to 60 FPS even in 64-player matches.

Shadows are nice and deep, and the lighting is top notch, but we have to bring up our one complaint about the lighting. Maybe it’s just us, but it seems like J.J. Abrams pissed lens flare all over everything just before the game released. Yes, at first the lens flare is attractive, but our eyeballs are not cameras. Only cameras pick up lens flare!

Really, though, that’s the only demerit to the visuals we could come up with. The very seldom clipping issues turned into a write-off because it wasn’t prevalent enough (to our eye) to really be of note, but damn these lens flares get distracting — and they can actually cover up other beautiful effects.

Along with the visuals, the audio department does just as brilliant a job. The score of the campaign is thrilling and always perfectly matches the scenario you’re in, while the guns all seem to have more of a snap to their firing effect that makes them feel a bit more dangerous and punchy. Bullets whizzing past along with the chirps of a ricochet sound great, and they’ll make you mash the blue hell out of your “duck” button.

In multiplayer there’s virtually no soundtrack, but the environments themselves sound great. We absolutely can’t get enough of the map “Parcel Storm,” which features a set of islands and some bad incoming weather. The air around you begins to swell, and the deafening wind bringing this thunderous storm closer to you, sending a very clear indication that shit is about to get really bad (all of which you can tell with your eyes closed).

It’s not its strongest point, but let it be known that Battlefield 4’s campaign mode is superior to the third game in every facet — pacing, intensity, emotional impact and overall quality. Unfortunately, the formula tends to repeat often: Open door, kill some people, see explosion, watch a teammate yell at another one, and then push an elevator button or door lever. While everything in between those progression devices is fun, it becomes apparent that the A.I. is completely idiotic.

We’ve noticed our squad members didn’t take up tactical positions, sometimes taking cover completely outside of the battle (and contributing nothing) or sometimes running blindly in front of enemies that are unaware of our presence. The bad thing about that is that the enemy remains oblivious until they see the player or hear gunfire. So your squad can pretty much skate everywhere, but as soon as the enemy sees you, it’s on. Thankfully the wealth of options in multiplayer saves the day.

Battlefield has always been on the top tier of multiplayer gaming, and Battlefield 4 further cements that well-deserved reputation. Finally, console players can jump into 64-player conquest matches, in which two additional players assuming the role of team “Commanders” can coordinate assaults and provide bonuses to their team.

In addition, there are several other modes, such as Obliteration, in which teams carry a bomb to the opposing team’s base to destroy it. Air Superiority serves as a great new mode and training tool as all too often in Battlefield 3 the better players would try hoarding jets and helicopters, making it damn near impossible for new players to practice and get the hang of things. Well, Air Superiority is just planes and choppers vying for control of the skies! Squad and Team Deathmatch, Hardcore, Rush, all of it’s there, making this Battlefield game a case study in developers caring for their community.

Getting matched via Quick Match or the Server Browser is simple and quick, and matches (depending on your region) seem pretty much lag-free. Battlefield 4 also has some of the best hit detection we’ve witnessed in an online shooter — there was never a time we felt like we got robbed of a kill because of lag or invisible bullets.

Maps are also well thought out and just waiting to be scorched by war. Plus, Battlefield 4 features “Levolution,” which is exactly what it sounds like — levels evolving as you play. Whether it be a dam bursting or a tower falling, the sheer chaos and destruction everywhere around you is awe-inspiring and unlike anything we’ve seen in an online shooter.

Once you start playing, you’ll immediately notice that everything has a heavier, more realistic feel to it. Probably my favourite addition is allowing players to lean from side to side while aiming down the sight using the Six-Axis controls, and when crouched next to low cover you can peek over and fire, just like Far Cry 3 or any Killzone game.

Being able to really take cover makes battles feel more real, and it adds a factor of desperation when all of a sudden a swarm of bullets splashes the concrete platform ahead of you, sending debris all over your face. If we had to sum it up, there is no online experience that comes close to this level of intensity.

We try to keep our fan boy self at bay, but we don’t think we’re being fanboyish at all when we say this: Buy this damn game! Whether on Xbox One, PS4 or even on PC, you’d be hard pressed to find a game that can even come close to the experience waiting for you inside Battlefield 4.

By Jeff Cater
Tags: Battlefield 4, DICE
This entry was posted on Tuesday, December 3rd, 2013 at 12:20 pm and is filed under Jeff Cater, Video Game Reviews. You can follow any responses to this entry through the RSS 2.0 feed. Both comments and pings are currently closed.