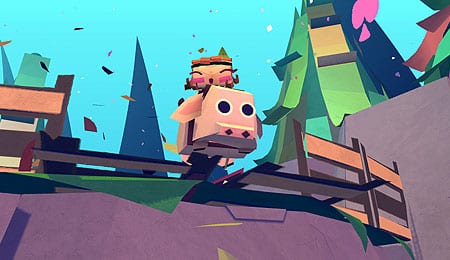 While you can quibble about what’s currently the best game for the PlayStation Vita, you’d be hard pressed not to include the excellent LittleBigPlanet. Now developer Media Molecule is back with an all-new title, Tearaway. You don’t need to look hard to spot the resemblance between the two, but to its credit, MM has made something that doesn’t feel derivative of LBP. In fact, it’s one-upped its signature franchise with perhaps the best game to hit the Vita since its inception.

No game to date has done a better job of using all of the Vita’s unique features. Throughout your adventure you’ll be manipulating objects using the touch screen, launching your little envelope or puncturing into the world with the rear pad, snapping pictures via the camera and even competently utilizing the tilt feature (something we generally detest). The best thing Tearaway does here is that it never overuses any one concept, and as a result we ended up enjoying them all.

On the traditional side, you’ll have a handful of maneuvers at your disposal, including the ability to jump, grab items/enemies and curl up into a ball and roll. Later on, you’ll acquire an accordion-like weapon that can suck things in and/or blow them out using the bumpers.

What holds Tearaway back from top marks is the clumsy creation interface. Multiple times during your adventure you’ll be asked to draw something (a pumpkin, a star, etc.) using the touch screen. In theory it’s a lot of fun, but it’s something that’d be infinitely better with a stylus. With your finger it’s too difficult to see what you’re creating, and the eraser is so broad that touch ups are basically impossible. An undo function (not to be confused with the “start from scratch” option that’s currently available) would’ve been a nice inclusion.

Although we could hurl any number of superlatives at you to describe the game’s graphics, we think one word pretty much sums it up: delightful. The world and characters are crafted entirely from virtual paper, which creates something that’s charming and wholly unique. Many of the creatures you encounter are customizable, allowing you to put your own spin on the world’s vibe.

If that sounds trivial or gimmicky, rest assured it is not. It’s endlessly cool to create a colourful snowflake from scratch and then suddenly watch hundreds of copies of it falling from the sky as you continue on your way. Or to come across a colourless elk, snap a picture of something in your house and then see that pattern show up on said elk (and its friends). The whole thing is just so colourful and vibrant that you can’t help but be drawn into it.

Outside of a few small speaking parts, all the inhabitants of Tearaway speak cutesy gibberish. If done incorrectly it could’ve become irritating, but like seemingly everything here, the proper balance has been struck, and instead it remains humorous. The score is very strong as well, with the soundtrack building in all the right moments, and then subtly sinking into the background.

Tearaway follows the intertwined story of a messenger named Iota, who looks like a envelope with a heart-shaped stamp (which doubles as your life meter), and the mysterious You (as in you, the person playing the game) that has suddenly appeared in the sun. As it turns out, when your face appeared it created a hole in the sun, allowing some unsavoury blocks of paper — ingeniously dubbed “scraps” — to infiltrate the world and cause havoc.

That provides the impetus for your adventure as you try to help Iota deliver his message while setting things right. We won’t delve too deeply into the storyline lest we spoil any of it, though in truth we’re not even sure if we could. As the narrator reminds you, this is your story. Suffice to say it makes for an engaging, fun time as you and Iota form a bond.

From a gameplay perspective, Tearaway would be classified primarily as a platformer, although that doesn’t really do the game justice. As “touched” on earlier, the game incorporates the full suite of available Vita gadgets in a number of different ways. One moment you’re tapping the rear-touch to spring Iota off drum-like objects, the next you’re holding your finger on it as it appears in the world to rearrange items and clear a path for Iota to progress.

As you traverse the land and dispose of scraps, you’ll be rewarded with confetti, which acts as the game’s currency. With it you can purchase new knickknacks to trick out Iota and the surrounding world, or you can spend it on new lenses and filters for the in-game camera. While mostly superfluous, collecting these items is still fun and provides more options for customization.

Speaking of the in-game camera, Tearaway uses it to help create one of the best collectible quests we’ve seen. During your travels you’ll occasionally encounter critters or objects that have lost their colour. If you stop and photograph them, their colour returns, and you unlock real-world instructions on how to make the creature out of paper. I’m not sure how many people will take things offline, but it’s a pretty clever concept.

Beyond moving from Point A to Point B, you’ll also be doing battle with the reprehensible scraps. There are several varieties, including ones that fly and others that walk around on stilts and fire projectiles at you. Each one has an exploitable weakness in your selection of moves, though, and even the most hectic battles aren’t hard to overcome.

That brings us to what might be the game’s Achilles’ heel to some — it’s not very difficult. Most of our failures came from simply misjudging a jump or losing track of momentum, and failures are scarcely punished thanks to a liberal number of checkpoints.

To those that would bypass the game on that basis, however, we would suggest you rethink it. Tearaway isn’t about testing your reflexes or cerebral skills as a gamer. It’s about getting you to fully engage in an imaginary land, and to that end it’s a smashing success.

There are so many things we could write about Tearaway, but perhaps none encapsulate its charm and heart more than this: With two brand new systems and a stack of games awaiting review, Tearaway was the one we kept coming back to. It’s utterly brilliant, and we cannot recommend it highly enough.

By Herija Green
This entry was posted on Friday, November 29th, 2013 at 5:32 pm and is filed under Herija Green, Video Game Reviews. You can follow any responses to this entry through the RSS 2.0 feed. You can skip to the end and leave a response. Pinging is currently not allowed.