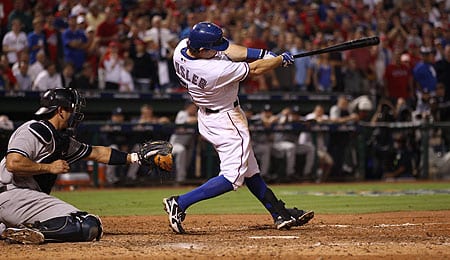 Can Ian Kinsler help the Tigers get back to the World Series? (Brad Newton, Texas Rangers)

Once again, RotoRob Hockey Editor Chris Wassel subbed in for Tim McLeod on this week’s episode of RotoRob Fantasy Baseball Weekly Podcast, heard every Thursday at 9 p.m. EST on Blogtalkradio. And hey, this time Chris even called in so you could hear us both! Woo hoo!

Thanks again to Chris for stepping up the plate, To hear the show in all its ARod bashing glory, simply click that pointy thingy below.

And feel free to voice your own opinions — contrary or otherwise — in the comments below.

By RotoRob
Tags: Detroit Tigers, Ian Kinsler, Miguel Cabrera
This entry was posted on Friday, November 22nd, 2013 at 3:29 pm and is filed under BASEBALL, Chris Wassel, Podcast, RotoRob, RotoRob's Fantasy Baseball Weekly. You can follow any responses to this entry through the RSS 2.0 feed. Both comments and pings are currently closed.